The sequel is better than the original, but it is also merely a chapter in an epic tale.

Share All sharing options for: Portland Away 2: Dave Travels Again

Away trips are not something I know well. Even counting an Academy game up at Crossfire or two I can still use one hand to count all my journeys supporting Seattle Sounders FC. Last year was my first MLS away. This year I repeated the trip, going to Portland with many of the same busmates. Unlike 2013, 2014 isn't a tragedy.

The plot graph for 2014 would be a bit complicated. A long introduction after last year's episode ended poorly, last year's season ended poorly. In fact the intro to my personal sequel would probably read like Dickens - 100 pages of narrative and description in exposition.

We boarded the buses as 6 AM. That's early on Saturday for me. It had been several years since I worked retail coffee and that would seem late. That meant a dog walk at 4:45 AM, coffee before my local opened and a keg tapping at about 6:30 AM.

On the bus ride down I was asked to give a few words. The captains of the bus (named after Anibaba, hereafter called Anibabus) have a tradition of having all first timers give a few words. I've given speeches quite a bit in my time, but early in the AM, not a leader who planned on talking, nor a first timer my words were simple, and stumbly bad.

Dave Away Portland:2 was off to a rough start.

It was a long ride down to Portland. There were three stops. Tacoma, Olympia and a rest stop all got to see me as I traveled with the Emerald City Supporters.

There's this thing about pulling up to the opposing stadium. It energizes you. Suddenly you are in a minority. Your friends are outnumbered. But you are also strong. You are powered by community, love of team and the knowledge that no matter what you go home a Sounder.

This feeling may be familiar to other travelers. That doesn't matter. 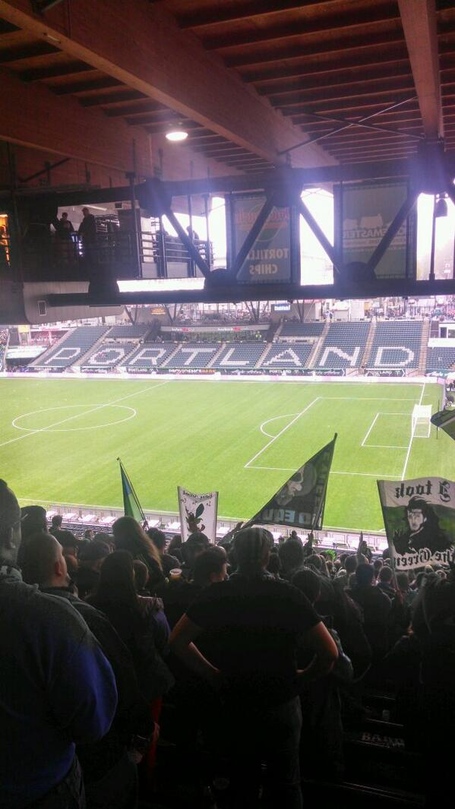 Pregame was a rallying cry. It is not just about firing up a team that had yet to enter the stadium. It was a confirmation of what we are.

When that whistle blows and the match starts while action rises. There is no assurance of victory, all we can do is chant, sing and hope. Then after only three minutes Kenny Cooper slaps that shot into the net. We erupt. Energy can not be higher. It's not that the old "when scoring first' tale is at the front of mind. It's that our memories of the last Portland Away are flushed.

As in most good stories that early rising action was a false climax. Chara and Valeri did their thing and there were hints of sorrow. There was no hint of quiet. Victory seemed unlikely. A literary tragedy seemed to be developing.

Aside: This is getting more like Gibson than Dickens. Broken sentences and a novel written in a Twitter style 30 years before the medium is invented.

Clint Dempsey resets the plot diagram. The away side, our side, pulls level and there aren't just minutes but a full hour left.

Choppy play and a flow that is hard to dissect takes over. As is the nature of soccer tension builds. Songs continue. Hope lives. A halftime whistle calls out. It is a break for the players, for those of us that traveled, for you at home.

They restart and so quickly the literary tragedy restarts. So quickly down to Chara and Urruti. Now 2-4. Our voices do not stop. Our hope continues. We are tested and we harden. Victory is not a requirement for who we are. We are either born Sounders, or we become Sounders. The constant, regardless of score, is that Sounders is something we are.

Substitutions are made. More yellow cards. More missed shots. More emotions teetering towards negativity. False climax after false climax show. The seventy-seventh minute comes and the new formation takes shape. Our heroes show that hope is part of who they are.

Maybe this isn't a tragedy? Maybe this man v man plot comes out in favor of our men? We hope. We chant. We wait.

There is so little time left. It's been a long day. The 4:30 AM is ten hours away. The beverages were strong. The action so intense we are draining. We rally and hope. Maybe the players are powered by our voices, maybe not. It is what we have.

This community of hundreds that formed over years or even hours lives with a desire to see tears. It happens so quickly that in the stands we do not know exactly what happened. We see DeAndre Yedlin down. He is one of us. He is Sounder born.

Hilario points to the fateful spot. There is to be a penalty.

This plot diagram. It would be so jagged. Ups and Downs throughout, but always building. It is 3-4 right now. Formations have shifted, momentum is unknown. Exhaustion is more common than excellence.

We watch from 222 and 223 as a debate ensues. Pineda and Dempsey stand at that little dot with a ball. A verbal Ro-Sham-Bo is taking place. We learn that our captain is capable of some Jedi shit. He takes that ball. Places it on that spot.

Simple and elegantly placed he scores.

Minutes remain. Is this our climax?

A gift from the soccer gods

A gift from the soccer gods Rate The Players

I am both deaf and hoarse for several minutes. The climax is a draw. The climax is not a tragedy. This is not a heroic tale in traditional form. It is instead the sequel that says more is to come. It shows that our heroes can succeed; they are fragile; they are us; we are them.

But our falling action is still to happen. The journey of hundreds of miles still happens. Our evening exists. I come home to real life.

Portland Away 2 will live with me. It may just be a sequel, but it was as good as any I've ever seen. It built on the history. The story was captured. Our pain, suffering, and effort was justified. It is only a point. More are needed. This is not a trilogy. It is a chapter. This epic is a tale that started forty years in our past. It will continue when we our gone.

These few verses though... they are beautiful.

We roar. The climax may never come. Action rises and falls, but we roar. This community that manifests itself in virtual and real roars.