Welcome to Sounder at Heart

After the World Cup this may be the first time you've noticed our little blog. In light of that here is a guide as to who we are, how to use the site tools and what we expect of the community. These may even be handy if you've been here for years.

Share All sharing options for: Welcome to Sounder at Heart

Sounder at Heart is first and foremost a community of Seattle Sounders FC fans. We talk about the club in a blog format. It does occasionally dip into other Puget Sound soccer (the Reign and UW being the most common subjects) as well as the United States National Team and other national teams with Sounders players. There is an affiliated podcast that goes with the site - Nos Audietis. That name is also the slogan for the site. Quite simply that phrase is Latin for "You Will Hear Us." 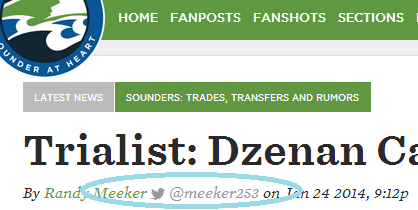 The site was founded by myself (Dave) back in August of 2008. Since then Jeremiah joined as the other managing editor and there are about a dozen people who will post about once a month or more. Each has a specialty and you will learn those over time. Our passions are readily apparent in our regular weekly story subjects. They are a mix of news, analysis, opinion and metaphors helping us all learn about this game and this club.

Those last two bullet point really gets into what makes Sounder at Heart more than a blog - the community. It is a place where passionate fans talk about the game and team they love.

Serious look at what we expect

This basically lays out that self-trolling is unacceptable.

Fun look at why we have comments

It's about learning, or teaching.

We have Community Standards that lend the site to great conversation;

By joining the blog you are part of a community. You will likely be judged by your words, so I suggest you choose them carefully. Try to keep the conversation PG-13. It is sports, so of course we understand that tempers flare, especially in game threads.

The comments section, FanPosts and FanShots are moderated. Comments will be hidden and/or deleted. Sometimes with no message sent to the user. At other times the user will receive a warning (this is just a way to communicate with users) or even a banning. Some bannings are forever. Others are not.

Let's focus on some awesome. Nearly every writer here got their start with a FanPost. That's basically a way you can treat Sounder at Heart as your own blog. Great FanPosts get promoted to the frontpage. They accept HTML and have a WYSIWYG editor as well. If you have an idea but can't figure out how to share it, send an email to one of the people listed on the masthead, we'll help.

The comments section has some unique tools that are all about empowering you to educate and entertain the rest of the community.

There are some catchphrases and memes that show up in comments. If these confuse you check the "Library" and the post that describes their origins.

Thank you and Enjoy.