The most recent depth chart reflects a shift to the 4-3-3 and the emergence of Gonzalo Pineda as a lineup regular. It's also caused a bit of a shift in how the depth is used in Reserve games.

Remember just over a month ago when it looked like Seattle Sounders FC would field an asymmetrical diamond? Those days are gone, in fact they never really happened. Sigi Schmid put out a bucket 4-4-2, a 4-2-3-1 and three times now their version of the 4-3-3 took the pitch to start games.

It's happened often enough that it may just be the way forward. It also may not as it sounds like the coach may continue figuring out his club's best shape.

"I thought that Pineda did well," Sigi told the media about the match against Portland. "I thought Ozzie did alright. I thought it was a big game for Michael Azira. Obviously it is probably the biggest crowd, with the exception of maybe a game back in his home country with the national team, but it is a game that you have to get used to. For him it was a difficult game. But he'll be fine. Those guys continue to advance. We miss Evans right now; Rose has a little bit of a tweak. Those two guys are other guys that fit into that. How we play as we move forward? That's something that we'll determine this week."

The Reserves have not played that 4-3-3, which makes a depth chart exercise a bit tougher. But they are changing how the midfield plays a bit. Both Fabio Periera and Aaron Kovar played centrally against Oregon State. With no holding mid behind them they had to both use space as Pineda does in the 4-3-3. The chart as of today reflects the team at full health and with all returned on-loan players. Kovar is the one in the oddest space in primary role because he has so little time centrally in his career.

It also preemptively lists today's release about injured players on the Injured List. They currently are not, but Sounders FC could move them there if they need to open space and/or an international slot. 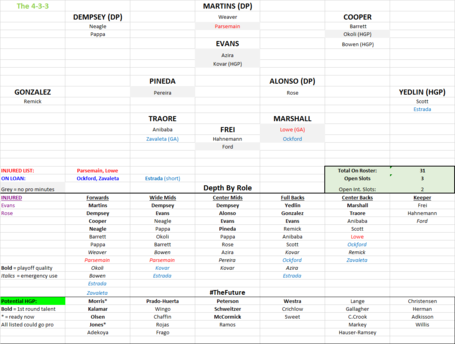 There are also some minor changes to the potential HGP list since the last depth chart. They take into account a few Reserve Games and a handful of Academy games.