Wow. This week's Sounder at Heart community player ratings are amazing in a couple ways. First, 857 votes were submitted as of 7 p.m. Tuesday night. That total blows away previous voting totals - last week was the previous high with 539 submissions. I'd like to think this feature is catching on. But it's also probably the fact it was Portland week and that the game was very exciting. Second, this week's ratings differ from mine by more than ever before - a couple higher, but many significantly lower. Readers gave four Sounders at least a full point less than I did. Read on.

Reader scores follow the player's name, followed by my ratings in parenthesis and then the difference between those two numbers in italics.

Jalil Anibaba: 3.42 (3) +0.42 Jalil's score here is the second lowest of the young season from the S@H community. Only Marco Pappa's 2.73 in the second week of the season was lower. Several people who submitted ratings actually gave Jalil a 1, which is a bit shocking. To me a 1 means a player is so horrible you really never want to see them in the kit again. On the other hand, one outlier gave Jalil an 8. I have no words to describe that decision.

Leo Gonzalez: 5.80 (7) -1.20 I am plenty surprised by the gap here between the community and my thoughts. I saw no real danger down Leo's side of the field all game and perhaps more forays into the offensive half of the field than I would expect from him. Still, I respect the decision of the community. Marshall's score was similarly lower than what I rated earlier in the week. Here's my thought on that: This team gave up four goals. I can see why the community would believe all of the defenders need to take some of the blame for such a goal meltdown.

Osvaldo Alonso: 6.00 (7) -1.00 In the comments following the game there seemed to be a sense that Ozzie was not himself in this game, perhaps nursing an injury or something. I haven't heard anything like that and I'm not 100 percent sure why his score was so low here. He completed 46 of 50 pass attempts this week, another week over 90 percent. Perhaps it's because he had fewer tackles this week and, like the defenders, has to be given some sort of responsibility for four goals conceded. I would say that Pineda may have suffered a similar fate.

Clint Dempsey: 8.71 (9) -0.29 A couple dozen readers gave Clint a 10 for his stellar performance. I will say again that I think it ranks up there with the best performances ever in a Sounders FC uniform. I dug through my old notes and stories and the only other time I could find that I gave a Sounders FC player a 9 was Kasey Keller on May 23, 2009. To be fair I have not rated every game - in fact none in 2012 and 2013 - but still it says something that this is basically the second time I can recall a player performing this well. Here's hoping he can stay close to this level for a while. I expect it will be difficult. I expect to see Clint earning a bunch of free kicks the next couple weeks as teams hack away at him to keep him from imposing his will on the game like he did in the second half against Portland.

Obafemi Martins: 7.33 (6) +1.33 I knew readers thought much more highly of Oba's performance than I did by the first comment on the Sunday ratings thread. It has been rightly pointed out that he combined well with Dempsey and had two assists. I'll buy that. I still can't get over that one moment in the first half where he over-dribbled and ran himself into a triple team, eventually losing the ball. I hate to see that kind of mindless turnover happen. That kind of play is something most of us are critical about when Lamar Neagle does it and honestly I expect much higher of Oba than Lamar. Still, I imagine two assists makes up for a couple unforced turnovers in most people's minds.

Marco Pappa (67th minute): 5.55 (7) -1.45. Both Neagle and Pappa finished significantly lower in the community ratings than in mine. I thought the substitutes completely changed this game and made it so the Sounders could equalize. I can understand these ratings, though. It's not like either of these community scores are bad.

And from Sidereal, a graphic look at the ratings. The horizontal lines are at the mean of each player's ratings from readers. The lines above and below extend one standard deviation in each direction, so players with more widely varying ratings will have longer lines. 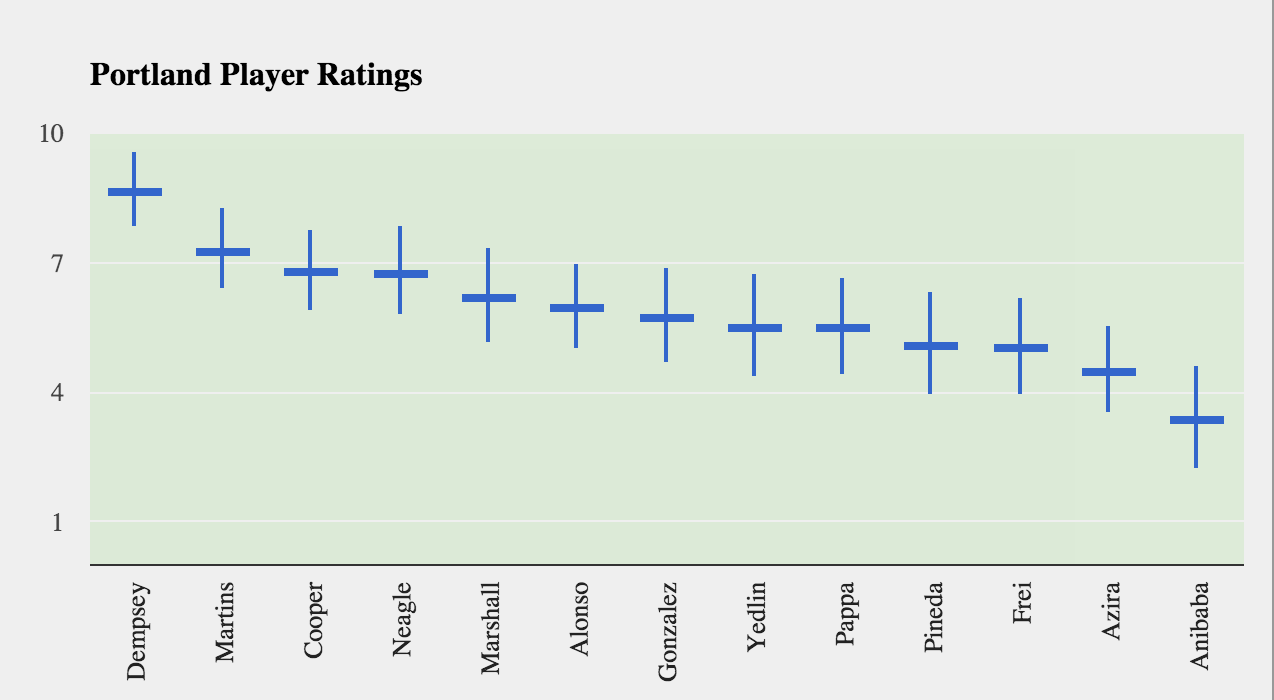