The Sounders make their second east coast trip on short rest to face a New England Revolution team near the top of the standings, on the strength of their magical ability to give up a lot of shots in the box without giving up goals.

Before Seattle's hydra was The Hydra, it was The Amoeba. The term was originally used by Sigi last season after the dominating home game against RSL. And any offseason fretting about whether Dempsey is best used as a CAM in a diamond or in a forward pair, or whether the Sounders had enough wingers for attacking width after the losses of Steve Zakuani and Mauro Rosales, were best answered with "Hey, relax. It's the Amoeba". And so far it's worked out alright. But Seattle didn't invent having a bunch of attacking players running around each other in the final third. New England has been running a proto-amoeba (a Protozoa?) for years.

The Revolution more or less run a 4-1-4-1 (in which a holding midfielder lurks behind a wide line of midfielders, who in turn lurk behind a single striker). In theory in a 4-1-4-1 you'd want that lone forward to be a physical target player who can occupy the central defenders and clear space for the midfielders beneath him. But the Revolution have struggled to find that player. It's why Jerry Bengtson was signed, but he's never performed consistently for the team. Saër Sène is a talented player when healthy, but he wants to run the channels, not bang into center backs. Juan Agudelo was another channel runner, and he left for Europe anyway. Teal Bunbury is another attempt that hasn't worked out. So in the absence of that player, the Revs really run a 4-1-5-0. The 5 attacking midfielders-slash-withdrawn forward float and interchange around the attacking third looking for penetration.

So does it work? Kind of. According to the standings, the team is in good shape: third in the east and second by PPG. They haven't done it with offense, mind you. Their 9 goals is the worst output by any team currently in playoff position, and is less than half of Seattle's 22 in just one fewer game. And when you take into account the fact 3 of those goals were PKs — leaving only 6 in the run of play in 9 games — that's not impressive.

Instead, they've been doing it with defense. In the first game of the season, they got pasted by Houston 4-0. Since then they've allowed a total of 4 goals. In 8 games. That's an amazing defense performance. But that 4-1-5-0 isn't a particularly stifling defensive setup. There's just the one defensive midfielder — veteran Andy Dorman — best described as "fine". Their best defender is center back Jose Goncalves, who's been out injured, leaving right back Andrew Farrell to shift over and cover the center. And what sounds like an unsettled defense actually has been if you look at shot totals. They've allowed the third most shots in their box in the league. They just haven't been punished for it. That's not going to last. Much like Dallas has been on a weird spurt of scoring a bunch of goals despite not taking many shots, the Revolution are on a spurt of not allowing many goals despite allowing a ton of shots.

Stats don't always tell a clear story, but they've got a narrative for New England in possession. Consider that the Revs are among the league leaders in the following categories: clearances, long balls, % of possession conceded, number of passes in the final third, and number of shots taken from outside the box. That's a story from back to front right there. Rather than playing out of the back, their defenders boot it up to the pack of five attackers, who pass it around amongst themselves (especially through playmaker Lee Nguyen) and then eventually get frustrated and take a long shot. The aforementioned lack of a target striker doesn't help with that.

But that's a problem that may be resolving itself. Last week against Toronto, rookie Patrick Mullins had a very strong game as the lone forward, scoring one golazo and drawing the handball penalty for the game winning goal. And more importantly, he was willing and able to body up the defenders and create space for the midfield. So they've moved onetime forward Teal Bunbury out onto the right wing, where he's looked more effective. They're joined by mercurial Diego Fagundez, who's an inverted winger on the left, looking for opportunities to cut into the box. And in the middle Nguyen pairs with Daigo Kobayashi (in Kelyn Rowe's absence) as the creators. 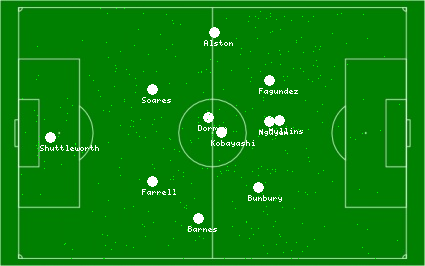 It's worth noting that there is absolutely no chance of New England trying to replicate the choking 4-3-1-2 FC Dallas used in midweek, which was designed to pack so many bodies into the defensive middle that Obafemi Martins and Clint Dempsey couldn't operate. That relied on effectively playing three defensive midfielders by pulling the sides of the diamond back to the defensive center. Nguyen and Kobayashi just aren't that kind of player. And frankly I don't think the Revolution have the positional discipline to pull it off even if they tried. So the hydra will once again have some room to breathe. Running at the trio of Dorman, Farrell, and A.J. Soares is something Martins and Dempsey can absolutely excel at. And if the Revolution continue to give up shots in the box, and those shots are being taken by those two players, there will be goals.

At the other end, if Seattle can keep forcing New England to take long, speculative shots they'll be in good shape. I don't expect that this is a game that will need a lot of width provided by DeAndre Yedlin, so he should be free to hang back and cover Fagundez. And if Leo Gonzalez is indeed able to return from his injury, he'll be tasked with shutting down Bunbury. And with Chad Marshall out-bodying Mullins, that frees his center back partner (likely Traore after his game off) to clean up any messes and frees Osvaldo Alonso to snuff out any chances that Nguyen tries to build. Lastly, it's a good game for Brad Evans to be hovering around the middle, since he's the Sounders best header of the ball in midfield and the Revolution send a lot of balls into the air.

Road games are hard. It's a long trip to the East coast and Seattle just had a game on Wednesday. But the Sounders are a much better team than the Revolution, who will struggle to make the playoffs no matter what the standings say now. If Seattle doesn't significantly outshoot New England I will be shocked. That doesn't mean they'll win, or even draw. But it means if they don't than the Revolution probably got pretty lucky (again).