Seattle kicks off their first match as a winning side against Portland at 4, hoping to prove that this season's series is going to go nothing like last season's.

Share All sharing options for: Reign vs Thorns Game Thread: Rebooting the Rivalry

Last season the "Cascadia Rivalry" in the NWSL existed more in theory than in practice. The Seattle Reign's struggles last season have been documented ad nauseum elsewhere, so there's no need to go into it here. But suffice to say that the fact that Portland beat Seattle in all 4 matches between the teams last season was not an anomaly.

This year things are a little different. The Reign have a new home, new kits, and almost a completely new roster. And they are the class of the league through the first month of the season, winning all five of their matches and looking dominant doing it. And Portland, if not looking quite as convincing as Seattle, are the only other undefeated team in the league, setting up a #1 vs #2 matchup in what's probably the most anticipated game in the league in the early season.

The one hitch in this Clash of the Titans is that international duty has sapped both rosters. The Reign lost Hope Solo, Stephanie Cox, Sydney Leroux, and Carmelina Moscato to the midweek friendly between the US and Canada, Nahomi Kawasumi to the nearly month-long Women's Asia Cup, and Jess Fishlock to the Wales team for a World Cup Qualifier. Solo should be fine to go again. Cox picked up an injury in training and didn't play for the US, so she may not be available. Leroux played the full match for the US so might only be fit for a sub appearance. And Fishlock just got off an intercontinental flight, so also might not be ready for a full 90.

The Thorns' most importantly player — Christine Sinclair — also played the full match for Canada and Allie Long played 25 minutes as a sub, so that should help even out the impact.

It's hard to predict the Reign lineup given the injuries and call-ups. Ex-Thorns player Danielle Foxhoven seems a lock as the most used sub this season and with Kawasumi definitely out. If Cox is out and with Amanda Frisbie still injured we may see draftee Megan Brigman on the back line. If Fishlock isn't ready to start, then the most likely replacements are Mariah Noguiera or Kate Deines. And if Leroux doesn't start I'd expect Bev Goebel as the forward with Kiersten Dallstream moving into the wing.

That's not an ideal Reign lineup, but it's still a very good one in this league. And it's good enough to trouble the Thorns. After all, even with the massive quality differential in the league last season, three of Seattle's losses to Portland were by only one goal. And they've got the confidence and quality to make up a goal difference. An away draw here would put a little tarnish of Seattle's ridiculous perfect record, but it wouldn't be a bad result at all. 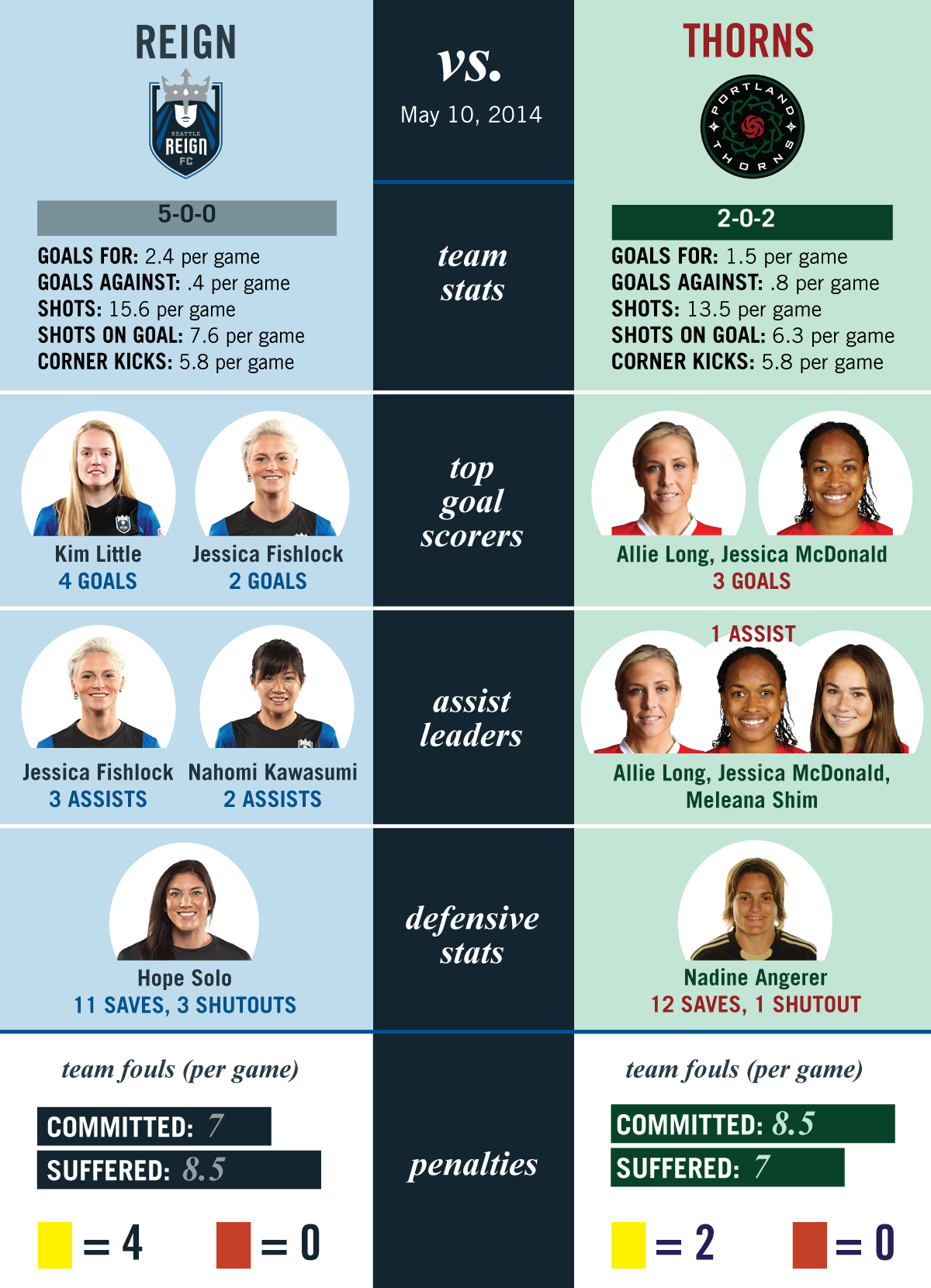