I'm Sounders 'til I Die!

What happens when you let anyone (willing to pony up the entry fee) onto the Sounders? We're going to find out.

Share All sharing options for: I'm Sounders 'til I Die!

Who's got two thumbs, vacation all next week, and going to be a Sounder?

A couple of months ago, the Sounders announced their inaugural "Adult Dream Camp".  The ADC (which was originally referred to as "adult fantasy camp" inside of the organization, but they wisely recognized the need for a slightly different name) was dreamed up and sold as a way for anyone to sign up and be a Sounder.

The camp includes several workouts on the CenturyLink Field pitch, use of the fully equipped locker room, a full set of uniform and training gear, and access to team trainers.  There's also going to be Sounders first team coaching staff helping to run things, talks and discussions with coaching staff and officials, and it all culminates in a full 90 minute game on the stadium pitch during the daytime prior to the San Jose game on Saturday the 17th.

Being a total Sounders fanboy, and already having scheduled vacation during that time period (for a soccer trip to Europe that I was going to cancel anyway- oh, how life changes with a new baby) I totally had to go for it and sign up.

The Club sent out an email a week or two ago to let us know... well, let me quote the email:

Sigi and his staff ask a lot of our team with the goal of maximizing their potential.  Dave Tenney, our team’s Strength and Conditioning Coach, constructs off-season training programs that build an aerobic and anaerobic base level needed to compete and avoid injury throughout preseason.  A preview of this program is attached to this email, and as you can see, it is quite rigorous.

Um, yeah.  Here's part of the workouts they sent out; these are two different types of aerobic runs they suggest to players: 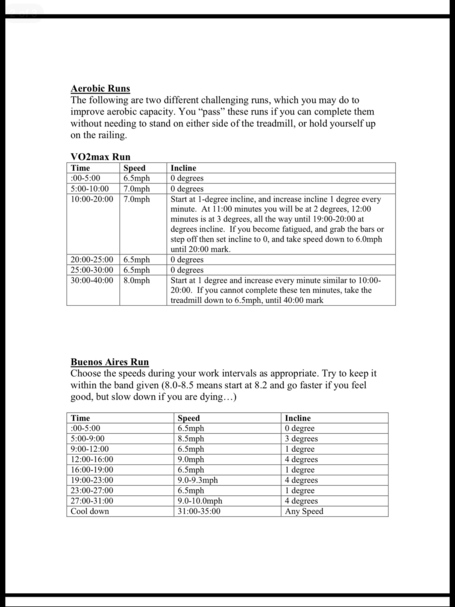 Even though they say "we certainly don't expect you to be in this kind of shape" at first I freaked out... and then I realized that absolutely nobody is going to expect a 45 year old man carrying 20 pounds more than he liked would be able to do one of these runs, so I had another riDQulous Blizzard (mmmm, Chocolate Extreme... why are the waists of my pants shrinking in the dryer) and decided to not worry about it.

The schedule arrived earlier this week and it looks great - workouts and luncheons and watching the Sounders first team train on Wednesday, Thursday, and Friday, and then all day at the Stadium on Saturday- with our big game at 10:30 on Saturday morning and then staying through the game vs San Jose that evening.

To say that I'm excited would be an understatement- I'm gonna be a Sounder!  Woohoo!  I just hope I don't get hurt, because I'd hate to miss the chance to walk out onto the pitch and play an actual game.

I'll try and keep a diary and take some pictures to share with folks.