Martins earns a "great" rating from Sounder at Heart readers for his two-assist performance in the May 7 win against Dallas.

Obafemi Martins earned the praise of Sounder at Heart readers for his play and two assists against FC Dallas in Seattle Sounders FC’s 2-1 win Wednesday night.

Martins teamed with Lamar Neagle and Kenny Cooper for the two goals in the win, with Martins doing the work to create great chances and Neagle and Cooper making intelligent runs to finish off the balls Martins sent to them along the ground. Cooper and Neagle finished with the third- and fourth-highest ratings for the game. Chad Marshall was second, earning a 7.33 from the more than 570 people who submitted ratings for the rare mid-week game.

The number of ratings submitted was down a bit from the more than 700 submitted in recent weeks. I’d guess that the weeknight game is to blame for the difference. People do have to work or attend classes during the week, after all.

Chad Marshall: 7.33 (7) +0.33 Chad is still basking in the glow of the magnificent game against Philadelphia May 3 from which he earned readers’ highest ratings of the season. I think his ratings for the foreseeable future could continue to be higher. Sounders supporters have learned how valuable he is following his recent spell of top-notch performances. As a person who does ratings I always wonder how such facts play in to my mind, and your minds, when we sit down and rate the next game.

Gonzalo Pineda: 6.69 (6) +0.69 I often have a hard time seeing what readers see on Gonzalo. The difference in scores here is not that great, but I don’t think my scores and the readers’ scores are ever very close on Gonzo. I haven’t gone back and done the math, but I’d venture the difference on his scores may add up to the highest on any one player over the course of the games so far. Perhaps I will do that math after Sunday’s match. In the meantime I’m curious, what do all of you look at, and look for, when rating Gonzalo’s play? Love to read some discussion on this.

Lamar Neagle: 7.09 (7) +0.09. It’s good to see Lamar rebound not just on the field but also in the eyes of readers. Lamar had a flawed game against Philadelphia. He had a very good game against Dallas. When Marco Pappa had his flawed game earlier this year, it seemed to take those submitting ratings an appearance or two to put his past foibles behind him. It’s as if we expected Pappa to underperform again. Those kinds of thoughts don’t seem to have followed Lamar, who continued his hot goal-scoring streak. He is an incredibly valuable part of the squad at this point, and I think that will grow in the next two months or so, when Clint Dempsey leaves to represent the USA in the World Cup.

Obafemi Martins: 8.09 (7) +1.09 I asked the question in my ratings for this game about what kind of score you give a player who has a few turnovers and such but makes a couple of game-turning plays. To me the answer was a "very good" 7. Readers went more than a point higher; slightly past an 8 that signifies a great appearance. I respect that decision. There is a question in my mind about how much an assist should mean in a ratings system – certainly something less than a goal. I think the community has answered that question by saying that the plays that make the goals are almost as important as the goals themselves. I can see that. It’s true that without what Oba did on Wednesday night there may not have been any Sounders goals at all.

Kenny Cooper (86th minute): 7.00 (7) 0.00 This is a tremendous score for such a limited amount of time on the pitch. Cooper’s great run and finish on the game-winning goal earned him a "very good" from readers, and from me, despite logging less than 10 minutes. I’m anxious to see how much more time Cooper will get while Dempsey is away, and whether he can turn that opportunity into even more great goals for this club.

And from Sidereal, a graphic look at the ratings. 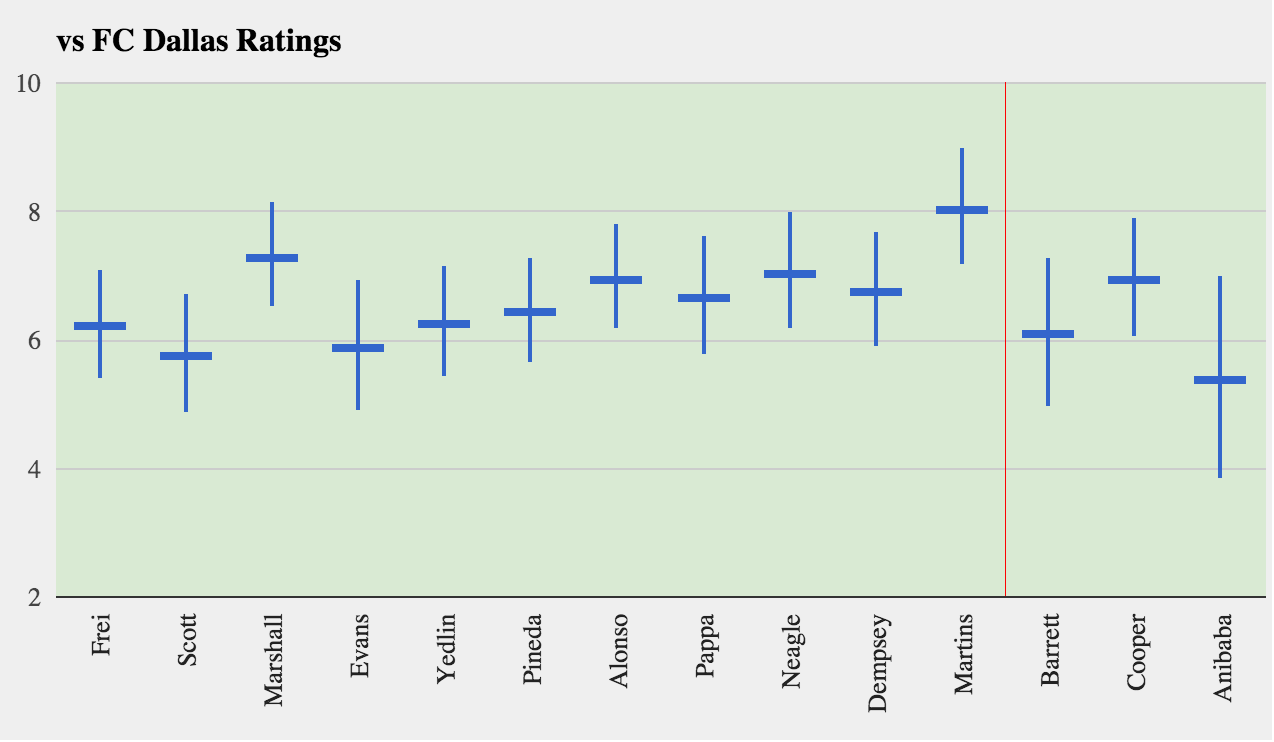