Stats Primer - When is a Pass Not a Pass?

Share All sharing options for: Stats Primer - When is a Pass Not a Pass?

Playing against the Philadelphia Union on May 3rd, the Seattle Sounders as a team completed 77% of their passes.

Whether you go to mlssoccer.com for your statistical needs, to whoscored.com, or to squawka.com, all these numbers are derived from data collected through OPTA Sports, the company that contracts with MLS for data collection. The number and popularity of websites coming up with ways to present and manipulate MLS statistics has increased - and that's a very good thing. I'm a big believer in the ability of a community to develop creative ideas more rapidly than a select few, so there's little harm and much to gain from giving the internet as much data as it can handle (little harm... unless the blogosphere achieves self-awareness, but there's little risk of that, right?).

One problem I've encountered recently - illustrated by the above example - is when disparate sites use different algorithms to present a statistic under the same label. 77, 81, and 82 are equally correct. 77% is the result from looking at raw "Successful pass" and "Unsuccessful pass" numbers from the mlssoccer.com chalkboard application. Whoscored.com derives 81% from the exclusion of "crosses" - long, attacking passes from the flanks to the center of the field (note that this is one of many statistics to introduce some modest element of subjective judgment) - and throw-ins. Squawka.com excludes other set pieces as well, plus goalkeeper- thrown passes for good measure.

When in doubt, consult the source

I would rather not take this space to describe every peculiar difference between the popular sites. Each source (with, perhaps, the exception of mlssoccer.com) has an extensive glossary. Citing a source or a specific process of manipulating the raw data when posting a statistic is good practice. Knowing the source, you can go to the glossary page to determine potential differences in calculation:

How much does it matter?

Let's take a look at the Sounders' first 9 games of 2014. Mlssoccer.com's chalkboard app tallies 11 numbers under the "Distribution" heading: successful and unsuccessful passes, crosses, and flick-ons; through balls, lay-offs, headers, key passes, and assists. Most of these labels overlap to some degree (a flick-on or a lay-off may or may not be a header). Throw-ins are listed under set pieces, but count as passes in the app. All descriptive labels mark events which are also tallied as a pass, EXCEPT for "successful crosses" - which are not. This creates a bizarre circumstance where a player who crosses often... say a designated corner kick taker, will have an artificially low pass completion rate even beyond his propensity to take low-percentage chances.

How does success rate vary with pass type? 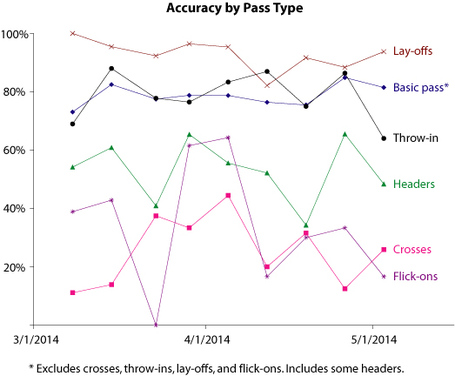 A team cannot simply dispense with a pass type. An offense that does not cross invites a defense to compress in the middle of the field, increasing the number of players able to make a play against any attack. Flick-ons may be high-risk, high-reward attempts to release a run behind the defense... or may simply be a defensive action in an attempt to push a clearance farther up the field. Just as clearly, we need to differentiate pass type in order to link stats to any clear understanding of player quality. Heading the ball, throwing the ball, and kicking it long or short all demand different skill sets and encounter different circumstances impacting completion rate. This is a major factor influencing how statistics vary by player role. Fullbacks usually take throw-ins. Centerbacks never cross. Forwards are forever in the attack. Cite statistics, but make sure to include such context.

Make sure to read the above glossary links when working with heavy statistical analysis. Additionally, keep the following, occasionally counter-intuitive features of the data firmly in mind. Feel free to add any I have missed in the comments, and happy stat-hunting!