Coming to you live from the visitor's locker room in CenturyLink Field....

The Sounders have really pulled out all the stops for those of us who signed up for Dream Camp.  They issued parking passes for the exclusive level of the garage, where the players normally park.  They escorted us back to the visitor's locker room and everyone's locker is labeled with their name and number.

A few things caught my eye; I've been in the back areas of the stadium before, but never into the locker room areas.  Upon entering the visitors locker room (where they set us up for the duration of the camp) there's a pretty noticeable poster about concussions; MLS is apparently taking the issue seriously, which is a good thing. 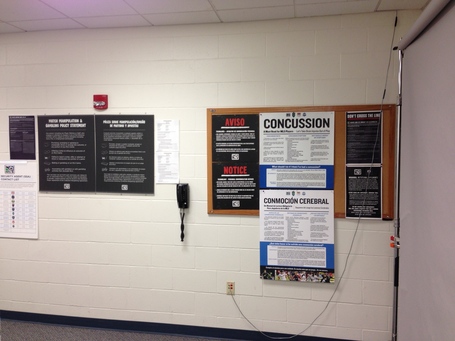 (There's also a poster about gambling and match manipulation, which ought to be interesting if MLS is truly looking at Vegas for the 24th franchise.)

We came in to find our locker.  It's labeled with our name and number (on a magnetized sign, which is a nice touch- it'll look cool on a lot of fridges at home) and some of the gear we're issued- a training top, some shorts, socks (which come in left and right- I don't know that I've ever had socks for specific feet before) as well as a couple of t-shirts and a towel for the showers. 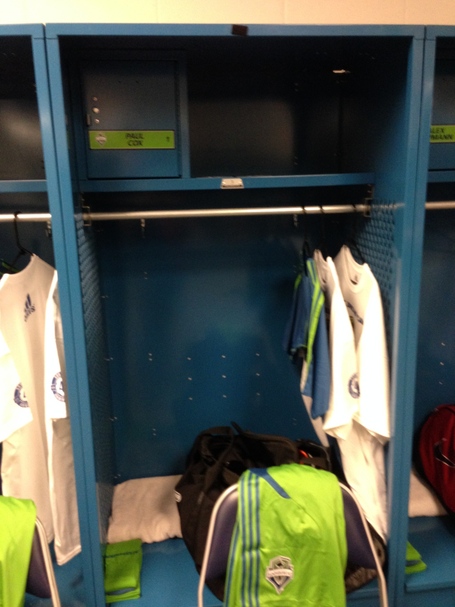 We had a short talk about where to find stuff and the day's agenda.  Then... surprise time!  We were called one by one into the interview room to find Coach Schmetzer (professionally attired in a very nice suit!) waiting for us, along with a standard MLS contract and our official Rave Green jersey!

There was a "signing ceremony" where the Coach joined me in putting our signatures on the bottom line, and then we posed for some photos before heading back to the locker room. 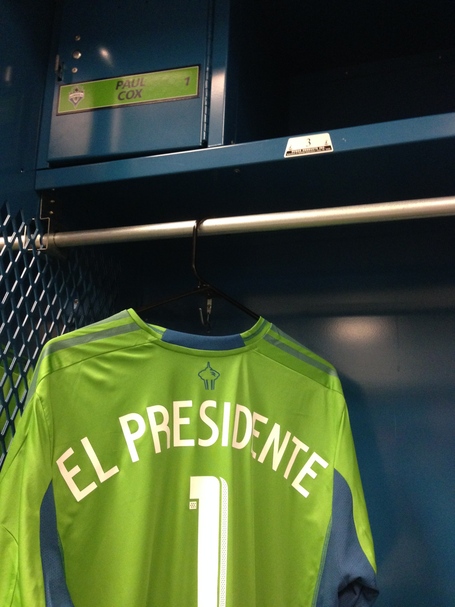 (I finally let my ego get big and asked for number 1, which is not normally my number - I usually use 19 - and "El Presidente" for my role on the Alliance Council.  Sue me, it's Dream Camp, and for 1500 bucks I'll put a goofy name on there if I want.)

The folks here are a variety of people- there's some dudes who look like pretty serious players (Schmetz said there's at least one guy who played with him) to people like me, recreational-at-best types who aren't really in playing shape.  Most look to be in their 30s and 40s, with a few 20-somethings and 50-plus as well.  There's also several women, including at least one that's a goalkeeper (in the locker a couple of spots away).

We got dressed and had one more quick talk from the camp's organizer.  The emphasis is on having fun; they asked us to avoid slide tackles and rough play, and reminded us of the range of talent.  (Nobody here is under any illusions of ever actually playing for the Sounders, which is nice.)

The Club has at least one trainer at all sessions, so if you pick up a little knock or need some ice for a creaky knee or ankle (and we have several of those!) they're ready to set you up.  The lockers have a mesh bag for washing your gear, just like the first time has, except ours don't have the customized fabric tags on there to denote who's stuff is who's- ours are just a plain old number.

Then, out to the stadium!  The field was set up just like it would be for first team training sessions, with all the normal reader and advertising boards (though they weren't turned on at the time).  It's pretty weird to be going to a practice and not having to bring our own balls, water or sports drinks, etc; the club has this all set up.  We had a little warmup kickaround, some stretching on our own, etc.

Coach Schmetzer (now changed into training gear) came out with Coach Tom Dutra, the Club's goalkeeper coach.  The camp's organizers also came out with some gear to lend a hand.  The goalies went off to do their mysterious goalie stuff and the rest of us had some warmups.

We started with basic passing drills- back and forth, then alternating the passes to our partner's right-then-left foot, then doing two-touch passing, etc.  We did some out-and-back drills with a simple turn/move to return.  Schmetz said that even at first team training, they'll open up and loosen up with these basic drills (that I know many people remember from past playing experience).

Then the coach broke us out and we did a half-field drill involving 8v8.  To "score" you have to get the ball into a 20-yard "end zone", and you can't receive a pass in there; if you do, you're offside.  It's a good exercise and helped us start to feel out our fellow players, their skills and smarts and movement, and we had a good time.

(I felt like I showed pretty well there; I'd be lying if I said there wasn't desire to do well and be considered by the coaches for a starting role in the final day of camp and the full game we're going to do.)

Finally, we went over to the other side of the field and played "goals in tight", which is a drill with GK and full size goals but on about half of the regular pitch.  There's players along the wing channels you can pass to but they can only take two touches, and then you also have a player on the goal line on either side of the goal you're attacking.  It's a very fast transition game with lots of shots and quick passing, and a lot of fun.  (I'm sure we didn't score as often as the real guys would.)

Final impressions from the first day?

Dream Camp is going to be a wild success for the Club.  They're doing it right- with gameday staff planning some stuff just like a full-fledged game, full locker room stuff, authentic customized gear, a trainer, first team coaching and more.

It's hugely fun.  The thrill of walking out onto the field, in the real gear, with all your teammates similarly outfitted, was awesome- and I get to do it again the next three days.

It's for everyone.  Yeah, most of the people have played at least recreational level soccer, but there were a few people who were pretty clearly not soccer players... and yet they're out there running around kicking at the ball and laughing and having a blast like everyone else.

And ultimately, once you start playing some soccer, it's still just soccer.  It FEELS bigger than the typical parks field, but it's really not, and it's still a game with 22 people and a ball.

I'm so happy I did this.  This was my main vacation bid this year, and I decided to stay home instead- and then this camp opened up and boom, I signed up right away.  Best decision I ever made.