Sounder at Heart readers responded to a poor performance by Seattle Sounders FC in a 5-0 loss at New England by handing out a slew of low ratings. No player received even a 5 – which means adequate – from the community. The highest average rating for a starter was a 4.69 for Clint Dempsey. DeAndre Yedlin received the second lowest rating of the season from readers with a 2.94.

Only Chad Marshall and Marco Pappa received higher ratings from readers than they did in my ratings Monday. And in those cases the differences were small.

Despite the low ratings, I think the community was right on, and probably if the players read this feature they would agree. It was a sub-par performance and one I know that no one wants to see repeated again. Fewer readers actually cast ballots this week too, only about 320. That can partly be blamed on the Sunday game, which meant the ballot was first posted on a weekday; late on Monday. But it may also be the case that many readers, like the first couple of commenters to my ratings thread, just stopped paying attention to the game when it got out of hand and didn’t watch enough of the game to feel comfortable giving a rating.

Stefan Frei: 3.44 (4) -0.56  I just want to point out that this is Stefan’s lowest rating of the season. That is true for all but one player this week, Marco Pappa. I won’t repeat it after every name.

DeAndre Yedlin: 2.94 (4) -1.06  This is the second-lowest rating given out this year by the Sounder at Heart community. Only the 2.73 that Pappa received in mid-March was worse. While some would argue that DeAndre isn’t always to blame for the gaps that develop on his side of the field – wanting the defensive midfielders to cover more and better – I think readers have grown tired of seeing this problem this season. It didn’t help that Sigi Schmid said in his post-game comments that he took DeAndre out in the 60th minute because he was not playing well.

Brad Evans: 3.87 (5) -1.13  I gave Brad a higher rating than the other starting defenders, mostly because of the work he did later in the game when switched to the right side. Readers weren’t as kind. They did not score Brad higher than the other defenders, in fact they put him lower than Chad Marshall. I don’t think Brad played well at left back, and I doubt he plays a ton more minutes there this season, unless in an injury emergency. He was just not helpful from that position and I completely get why readers rated him so low.

Clint Dempsey: 4.69 (6) -1.31  One interesting question that arises from the poor performance in Massachusetts is "how much do ratings reflect individual performance and how much team performance." Clint got below a 5 from readers while I gave him a "good" 6. A legitimate question asked in the comments with my ratings is "how in the world I could give anyone a ‘good’ rating when the team loses by five goals." I’ll just say that I have a system of rating and trying to remain consistent with it. One thing I did not do was just go down my score sheet and knock every player down for the team result. I tried to judge the players the same as I do in a win, with positive and negative plays jotted down in my notebook. Using that methodology, I had Clint at a score that earned other players a "6" in other games. I can understand why some people would think that is ludicrous given the team result, but that’s how I chose to do it even with this loss. Love to read your thoughts on whether ratings are for individual play, team play, or how you would weigh the two if you try to balance both.

And from Sidereal, a graphic look at the ratings: 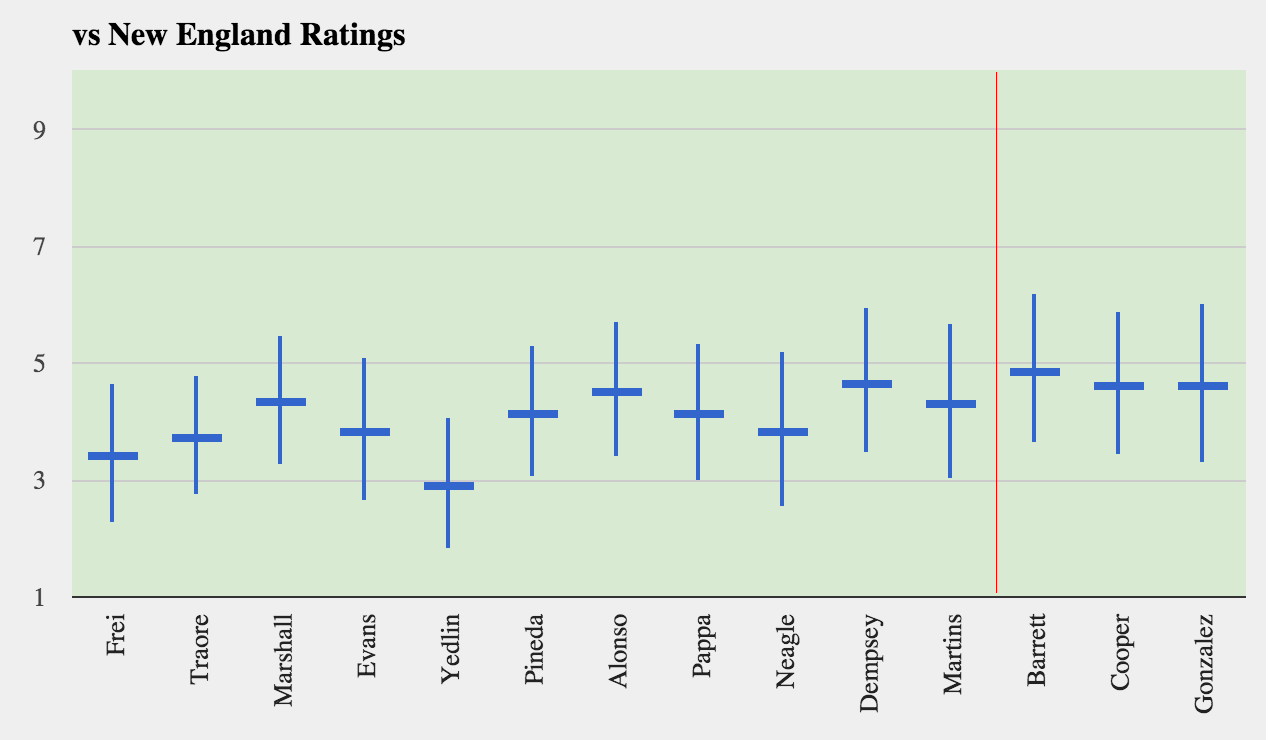