Osvaldo Alonso and Gonzalo Pineda had a terrible game on Sunday. And it was their poor play that was responsible for three goals scored against the Sounders.

Share All sharing options for: The Seattle Sounders blowout to New England is a case study in holding midfield catastrophes

The New England Revolution took it straight at the Seattle Sounders on Sunday, and while New England played to their formational strengths in defense and in transition play they got an incredible amount of help from quite possibly one of the worst holding midfield displays ever from the Seattle Sounders. It was clearly not Osvaldo Alonso's day and it wasn't Gonzalo Pineda's day either.

When defending in any situation, the most important key is to maintain compactness, both vertically and horizontally, closing channels and preventing opposition players from playing between the lines. Against the Revolution, neither Alonso nor Pineda played with any compactness, frequently were high up the field isolating the defense against too many attacking threats from New England.

Goal 1: Pineda pushes too high and forces the defense to be too aggressive 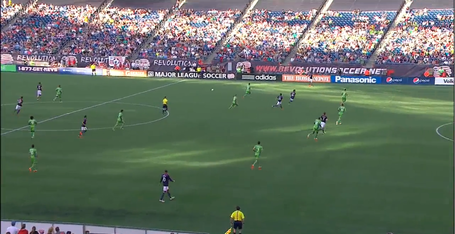 On the first goal, the defense breaks down immediately from the start. Pineda has pushed way out of position challenging up near the striker line. Furthermore this draws Alonso and Neagle higher up the field, allowing THREE Revolution players to set up shop between the defensive line and the midfield. 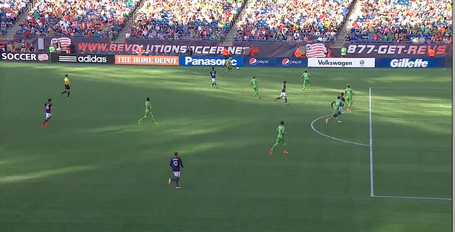 With Neagle still recovering, Yedlin is kept wide to deal with a potential breakaway from Revolution fullback Chris Tierney while Alonso has to mark the easy pass to Lee Nguyen, leaving a wide open outlet in the center of the park in Diego Fagundez. Ideally, Alonso would position to mark Fagundez, allowing Yedlin to compact and respond to the runner through defense. But Alonso is pinned to the center. He can't leave a free channel for the runner because Yedlin has to guard against an attack down the wing. 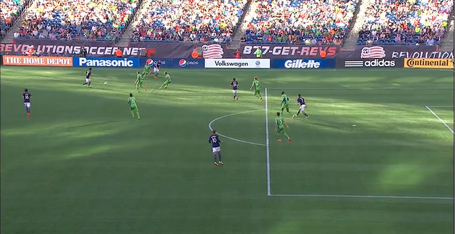 So when Fagundez inevitably gets dished, the Sounders are in a real bad spot. With no central midfield presence, Alonso pinned to the runner in Nguyen and Neagle dealing with flight down the wing, Yedlin is stuck between a rock and a hard place. Stay put and allow a completely free pass to any number of targets in a very dangerous area or press the opposition. The only issue is Alonso abandons tracking his mark forcing Marshall and Traore to scramble far out of position to cover Nguyen and Mullins. That Neagle gets burned so easily is a huge problem, but the systemic breakdown starting with the out of position Pineda and adding in Alonso's gaf leaves the Seattle centerbacks high and dry on what would normally be a clearance they could do in their sleep.

Goal 3: Alonso out of position forces the defense to be too aggressive 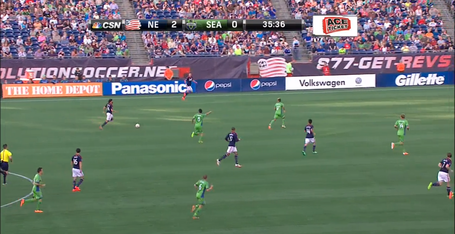 After a midfield recycle from New England, they found Lee Nguyen open on the left with a great outlet in Fagundez on the left. Just like in the last case, the horribly out of position defensive midfielder( in this case, Osvaldo Alonso) causes the Seattle defense to break down as soon as the play starts. With Pineda stepping to press Nguyen, the Revolution have two completely free options in the center of the park in Bunbury and Fagundez. 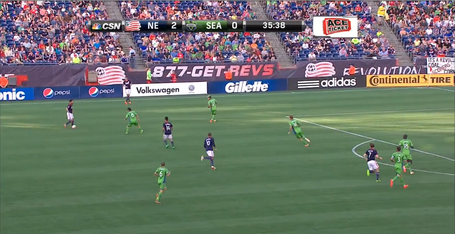 As Nguyen advances, Yedlin moves out wide to deal with Fagundez. In this case, Yedlin should have stayed compact with Marshall offering support in an area where New England had a huge man advantage. While under ideal circumstances, this is exactly what Yedlin should be doing, the lack of Alonso in holding midfield to address the New England presence leaves Chad Marshall high and dry with two targets on his own and his centerback partner covering his own man. 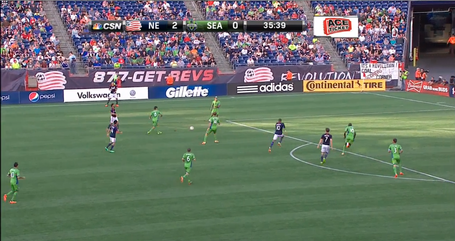 Responding to the threat posed by the New England midfielders, Marshall astutely recognizes the danger and steps to pressure the passer and force enough time for Alsonso to get back into position. Unfortunately, Lee Nguyen is really good and he slots a great throughball to Teal Bunbury who runs the now vacated channel before delivering New England's third goal.

Goal 5: Alonso out of position opens massive hole in central midfield forcing defense to be too aggressive 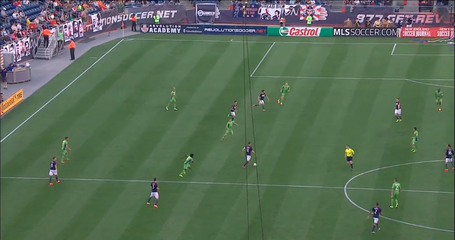 After a very poor longball out of the back from Chad Marshall finds Andy Dorman free, the Sounder are immediately in trouble again. Osvalod Alonso is far out of position, once again leaving multiple New England players between lines of defense very far apart to go along with a hole the size of Asia in front of the centerbacks, who are splayed wide apart and offer no support to each other 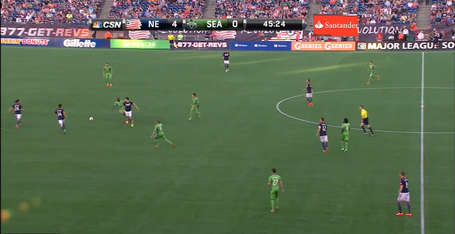 Dorman picks up the throughball to Mullins, who is immediately pressured by Traore. If Traore, doesn't pressure, it's 3-on-1 just outside the box which is odds so awful you should find the nearest desk and curl up under it. Without reinforcement from Marshall a massive hole opens for the two New England midfielders in Nguyen and Fagundez and Mullins obliges them with good dummy that sees the ball roll straight to the feet of Nguyen. That dummy takes Traore out of the play, but the time it takes gives Chad Marshall the opportunity to respond to the threat posed by Fagundez's central run. 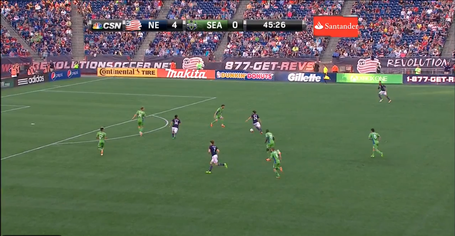 As Marshall recovers to respond to the run of Fagundez, Evans is forced to pressure Nguyen leaving the entire outside free for Teal Bunbury who makes no mistake in receiving Nguyen's inevitable pass and making his run on goal. While the shot took a deflection off Chad Marshall, that only added insult to injury, as once again the Sounders holding midfield issues left the centerbacks high and dry forcing them into risky actions.

While we've only looked at 3 of the 5 goals scored against the Sounders, the other two were examples of a flawlessly executed counterattack that we should all still be applauding, and a set piece transition goal. They really don't tell us much about the Sounders defensive woes issues on the day. Despite the hapless play of both Pineda and Alonso on Sunday, a lot of credit also goes to Jay Heaps and his 4-1-4-1 system. The presence of 3 central attacking options without a solid defensive midfield presence leaves the central defense at a man disadvantage that New England exploited to tremendous result in the first half. But on a different day, with Osvaldo Alonso on his game, this game goes quite differently.