The Great Midfield Disappearance of 2014

The New England Revolution bypassed the Sounders middle band en route to a 5-0 victory. How did Seattle lose it's defensive midfielders, and what ransom is needed to get them back?

Share All sharing options for: The Great Midfield Disappearance of 2014

As soccer fans, we have a tendency to focus on events that change the score line, rather than the 99.9% of trackable actions on the field that do not. It's easy to attribute the defensive errors that led to Sunday's defeat to isolated defensive errors unlikely to be repeated (after all, Seattle only concedes five goals once a year... right?). There's not much to add to Ryan's excellent breakdown of the defensive errors simply by running the numbers on the game... but we can ask the question whether those errors were isolated or reflected a systemic problem during the game, and we can ask another question: whether that problem is an established, exploitable weakness of the team. Let's place Sunday's midfield numbers in context with this season and with 2013. 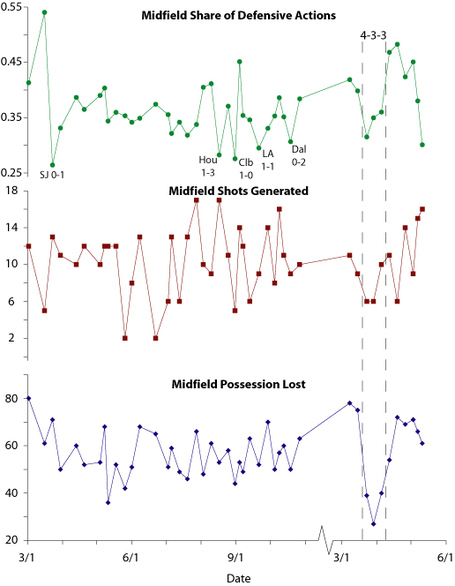 In 45 regular-season game, Sunday's mark of 30.1% is the fifth lowest share of defensive actions coming from Sounders midfield. Tying defensive numbers into goals conceded in this way is extremely difficult, but some negative impact on performance seems clear. The Sounders have won only once (the shorthanded bunker game last year against Columbus) in 6 tries with a midfield share below 31.5% (31.5 is the mark against Montreal this season, when the lead was never at risk due to the futility of the Impact's crossing). The list also includes two of the worst defensive performances of the past two years (1-3 vs. Houston, and last Sunday's drubbing). Still, Sunday's game does not seem to indicate a trend. Apart from the 4-3-3 experiment, the Sounders' midfield has taken a larger share of the defensive responsibility than their average 2013 performance. On, Sunday the midfield had trouble defending the Revolution, that failure contributed to the loss, and they're unlikely to perform as poorly when on their game.

...we may have a small problem to discuss with cause and effect.

Up to the second goal, the midfield, as a group, was building up typical 2014 numbers, and then fell completely out of the game. We may be able to cite these numbers for Seattle's failure to fight back into the game, but they are a poor target for the initial setback. What happened in the first 29 minutes to take a system and lineup that had been working and turn it on its head? The following table, covering the midfield defense up to 35:44, exhibits abnormal play.

I do not believe these numbers say much about the quality of defense being played, as there's no adjustment for opportunity (e.g., Neagle was indeed not having a strong defensive game, even relative to his midfield peers), but they do inform us as to where the attacking was taking place, and the difficulty Osvaldo Alonso and Gonzalo Pineda had in finding the game. In that stretch of time to 35:44, the two central midfielders accounted for two defensive actions (both Alonso) recorded in the defensive half. Only one came before the second goal. None came before the first goal. For the sake of comparison - in the first 30 minutes of the last three games, Alonso and Pineda were responsible for 6, 9, and 9 defensive actions in the Sounders' half of the field. The numbers suggest the breakdowns Ryan noted in the link above were a general feature of the early part of the game. Fortunately, the CM performance Sunday seems an aberration.

Is there a way - apart from rest and regression to average performance - for the Sounders to avoid a repeat episode of Sunday's loss? I haven't said much about the two other statistics plotted in the graph above. The Sounders have tinkered considerably with the midfield early in 2014, and overall the results have been promising. Shots generated (shots taken + chances created) have mainly been in line with the 2013 average or slightly better. Defensive share has been better than 2013, which likely leads to attacks starting from a better offensive position, along with the benefit of avoiding dangerous chances on defense. However, the returns for goals conceded are poor.

Looking at the numbers, I believe we can be certain the 4-3-3 is not a good solution. In its brief 2014 incarnation, it led to a strong trend of maintaining possession but poor chance creation, and still left the backline under high pressure. Sunday's game and others over the past two years demonstrate the need for at least two strong, fluid midfield defenders, whether nominally positioned wide or central. Long service and set pieces force either Gonzalo Pineda or Marco Pappa onto the field in any ideal formation... and we are left with the formation Sigi has used most often this season and the formation that failed on Sunday (Pappa/Alonso/Pineda/Neagle). The one attempt to improve defense wide (Brad Evans starting for Pappa against Philadelphia) stagnated the offense.

I do not believe there is one unique solution to the Sounders' goals conceded through the midfield. For whatever reason, the central midfielders were pulled too far into the attack on Sunday and failed to provide defensive cover that is, nominally, their role (it MUST be their role with two primary attackers on the wings). If fatigue is the excuse, the team needs to rotate in players to the wing and to central midfield while always accounting for the two indispensable defenders. With absences to the national team, there's no time to experiment like the time you're forced to do so.