Obafemi Martins' epic goal Saturday led him to by far the highest player ratings from the Sounder at Heart community this week. Martins scored 8.20 in the more than 450 ratings submitted by readers following the 1-0 victory by Seattle Sounders FC over San Jose. Marco Pappa was the next highest rated Sounder in the match at 7.13, more than a full point behind Martins.

Lamar Neagle’s performance received a wide-range of responses, including several twos and threes and a lone 1 on reader ballots. Perhaps it’s no surprise that his ratings varied so much given the discussion that followed my ratings when they were published Sunday. There seemed to be a high degree of disagreement. I had argued that if Lamar had scored on one of his two great chances I could have argued for him as man of the match over Martins. Obviously there is a big difference between that read of the game and the folks who thought Lamar was 3 "poor" or 2 "awful" in the game.

Zach Scott: 6.60 (7) -0.40 It might be worth noting that Zach’s rating here is as high or higher than most of the ratings Djimi Traore has received this season. I do wonder whether he will get another run as starting centerback soon. Readers scored him "very good" for this game and his play has something to do with the Sounders’ first clean sheet in a long time.

Osvaldo Alonso: 7.01 (8) -0.99 I’m a bit surprised that Ozzie didn’t earn an 8 from the community for his rock solid performance against San Jose. It’s fair to say that the Earthquakes were short-handed and weren’t the best competition. But I thought Ozzie was the key to the clean sheet, playing further back than he has in other games, and offering a lot of solid covering play. And he completed 90 percent of 81 passes attempted in this game. An interesting stat to add to your consideration of Ozzie in the future: Ben Jata, a senior analyst for Opta tweeted Monday that "Osvaldo Alonso averages 85.6 touches/game; most in MLS."

Marco Pappa: 7.13 (8) -0.87 As with Alonso, I rated Marco a lot higher than the community. I have been giving some thought to this and I think that it’s possible that some supporters weren’t nearly as satisfied with the 1-0 victory as I was. To me a 1-0 is a great soccer score, as long as your team has the "1." What the Sounders did Saturday was completely control an opponent, with San Jose having offering almost no threat to score then entire 90-plus minutes. That is a very difficult thing to do, even when you are playing an undermanned opponent. And it’s been especially difficult this season, when so much of the Sounders’ focus seems to be on attacking. To recognize a weakness and turn around that mentality is not an easy thing to do, especially in one week’s time. I’m sure all of us would have loved a 2-0 or 3-0 score line, but to me the most important part was the "0" for the opponent. Personally I’ll take a 1-0 victory over a 4-4 tie every time.

Obafemi Martins: 8.20 (8) +0.20 Based on the comments with the Sunday ratings ballot and story I expected Oba to finish lower than the 8 I gave him. A couple questioned why I was so high, and a couple others said they thought he actually played relatively poorly and got a bit lucky on the goal. I guess this shows there are a lot of folks entering ballots who aren’t jumping into the conversations. And let’s not underestimate the effect of that magical goal. It was a kind of goal you just never see. I’m not sure I’ve ever seen anything exactly like it when you consider the angle, the fact that first-timed it off a bounce and the fact it was done with a left foot (since most strikers are not left-footed like Oba). I’m not arguing it was the greatest goal ever, just that it was extremely rare. It should definitely be in contention for MLS goal of the year when the time comes.

And a graphic look at the ratings: 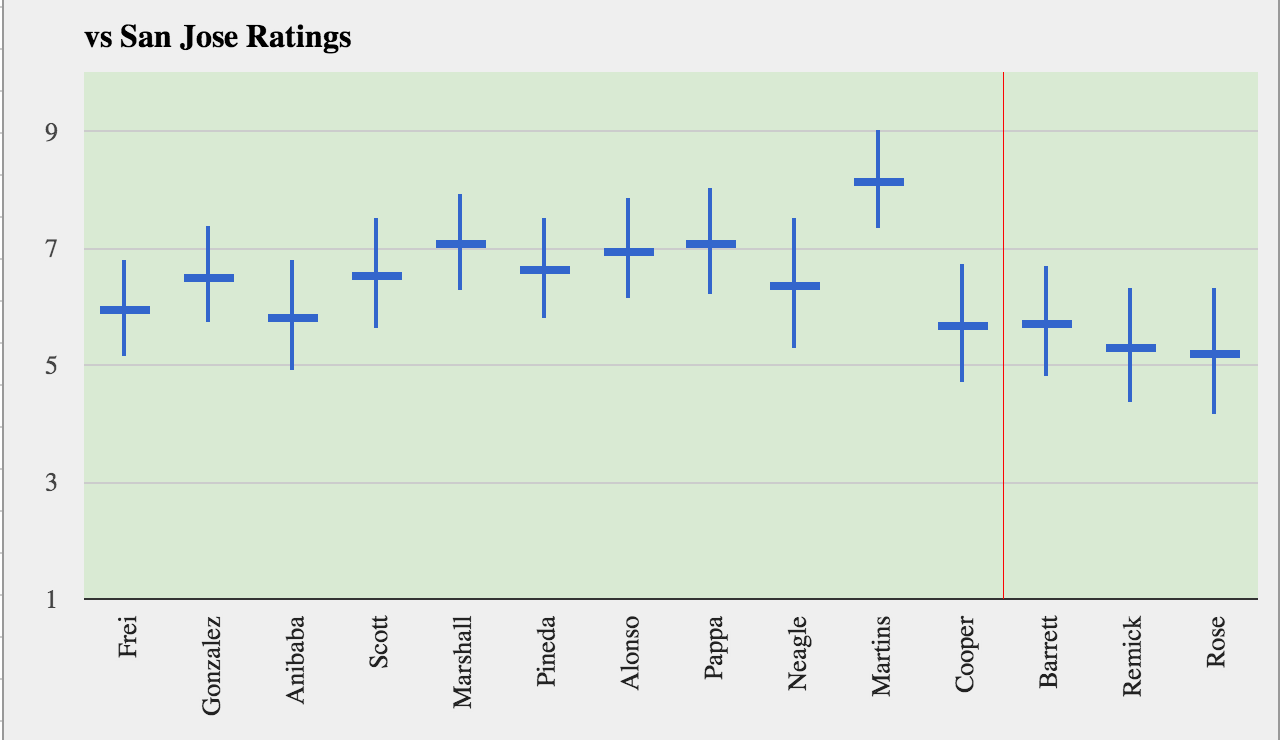