The running and gunning Vancouver Whitecaps welcome the Sounders to BC Place for the first time this season. I'm recommending a more defensive game than Seattle's used to playing this season.

For many fans, the ideal soccer match would consist entirely of players dribbling by each other at a hundred miles an hour and blasting in long, speculative shots. That's certainly an exciting spectacle. If that's your kind of game, the Vancouver Whitecaps might be the team for you. The attacking group of Erik Hurtado, Darren Mattocks (when healthy), and Kekuta Manneh is the fastest trio you'll find in the league. Woe betide the defense that lets them run by, or chooses to play too high a line, or just catches them on a good day. The Sounders certainly found that out late last season when Manneh had a career day in Seattle — the result that most contributed to Vancouver winning the 2013 Cascadia Cup.

And while dangerous, that really is the only dimension to their attack. Especially with onetime Canadian wunderkind Russell Teibert not getting playing time, the Whitecaps do not cross. . they're 17th in the league in non-corner crosses. They do not attack with their heads — they're last in the league at headed shots per game and are one of only two teams (with Toronto) without a headed goal yet this season. They do not dive into the attacking corner to spread the defense. Instead it's speed on the counter and chipped balls over the defense, over and over. They're second in the league in fastbreaks, first in one-on-ones with the keeper, third in chipped passes, and fourth in offside calls.

The other interesting statistical note is that they lead the league by a lot in shots from outside the box. Some of that is the fact that nearly all of their free kicks are shots (since they don't make much effort to cross them for headers). But mostly it's that if they aren't on a fast counter-attack, they don't have a lot of facility for the short passing necessary to create a close shot through a settled defense. Instead they just bomb shots from 20 yards out, which thus far have gone in at a pretty impressive rate. They've scored on 8.5% of their shots from outside the box, which is by far top in the league (Dallas is next at 6.4, then Toronto at 6.1). That is a rate that will almost certainly regress. But meanwhile it's important for the defensive midfield to close down on players on the ball in the 20-30 yard range so we don't see another performance like Diego Chara's for Portland. And they should be able to get help from the fullbacks, who won't be as troubled by the Whitecaps' narrow attack. 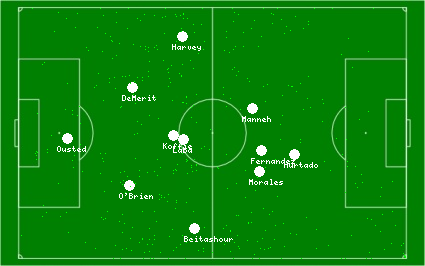 A deep defensive line seems like an obvious choice. Any crosses the Whitecaps want to drop in through the air should be easily dealt with by Chad Marshall against an offense with little aerial prowess. And a deep line with a forward press would create big holes in the Seattle midfield, so pulling back off the defensive line to let them pass around the back would help compress the space. Essentially it's a call for as close to a bunker as Seattle will ever play, which really just means an organized defensive midfield that doesn't get too ambitious about getting forward. That's specifically guidance for Osvaldo Alonso, who's left the defensive midfield more open at times this season in an effort to help become a playmaker in the offensive end.

There might be a little rust for Vancouver. They haven't played a league game in two weeks and any game at all in 10 days. The ideal situation would be getting on them with an early goal before they settle and then forcing them to work through a set defense to cut out the danger of their fast breaks.

With Alonso reined in to close space in the midfield and with DeAndre Yedlin off on World Cup duty (woohoo), leaving a much more conservative fullback (either Jalil Anibaba or perhaps the newly returned Brad Evans), the Sounders' offense would be much less potent than it has been at times this season. But given that the 1-0 win over San Jose felt like something of a relief — just due to the shutout — that's a mindset the team might be happy to take. It would leave the offense to: more magic from Obafemi Martins, grinding runs from Lamar Neagle or Kenny Cooper, good deliveries from Marco Pappa, and maybe something on a set piece. Which really is a pretty good arsenal, when you look at it.

The defense Seattle will be running against isn't full of stars, but defends well as a pack. With an offense predicated on scything runs at the defense and not much intricate passing, they don't even really want that many players in the attacking half, so their pair of defensive midfielders makes sense. One is the serviceable Gershon Koffie and the other is Matias Laba, who was cast out of Toronto so they could free a DP spot for their trio of big offseason signings.

That defense will notably be without fullback Steven Beitashour, who's off with Iran. He provides most of what little attacking width they have. In his absence they'll likely play veteran midfielder Nigel Reo-Coker, who's apparently fully recovered from his epic run-in with a bike rack. While he can replicate Beitashour's service, he's not really a fullback defensively and Seattle might get chances attacking the left wing with Pappa or Neagle.

This is, more than anything else, a game to be managed. Bombing forward to play in the attack is fun, but against Vancouver's counter it will almost certainly lead to a repeat of the New England game. And there will be temptations to push forward to make up for the lack of Clint Dempsey in the attack. Instead, a patient midfield that's able to hold its shape and not panic can frustrate the Whitecaps, and if that means a 1-1 or even a 0-0 draw, fine. Road draws will get us to the playoffs and, if we take care of games at home, to the return of the Cascadia Cup.