Sounder at Heart readers found Seattle Sounders FC efforts in Vancouver last Saturday mostly adequate to good, but nothing about the 2-2 draw inspired high scores in the weekly player ratings.

Marco Pappa ended up with the highest rating at 6.59, barely ahead of Obafemi Martins at 6.45 and Gonzalo Pineda at 6.41. Ozzie Alonso, who some commented had an amazing second half, was fourth in the ratings at 6.21.

Stefan Frei recorded his lowest rating of the year from the community with a 3.59 as many bristled at the poor decision-making that led to Vancouver's second goal. Djimi Traore also finished below 5, receiving a 4.52 for his limited minutes in defense before getting injured.

Here's the full look at the community ratings for this game. Reader scores follow the player's name, followed by my ratings in parenthesis and then the difference between those two numbers in italics.

Stefan Frei: 3.59 (5) -1.41 It's fair to say that Sounder at Heart readers were disturbed by Stefan's giveaway goal. His decision to leave his box and then clear the ball back to the center of the park is really not explainable. In the comments on Sunday's ratings thread many people also said they thought his distribution was very bad, especially the numerous times he kicked the ball out to touch from goal kicks. I believed his four saves helped make up for those factors enough to earn him a 5 "adequate" score, but I can understand why readers felt strongly they did not.

Djimi Traore: 4.52 (5) -0.48 I don't think much more needs to be said about the community's trust in Djimi's play then the fact that readers are now posting fan posts about possible centerbacks available in the summer transfer window. There has been a deterioration in his performance from last year and it has many readers questioning whether he is an automatic start in the center of defense any longer.

Gonzalo Pineda: 6.41 (6) +0.41 Of the Sounders starting 11, only Gonzalo, Alonso and Martins finished higher in reader ratings than in mine. I don't know what to attribute this too. It's not much of a difference, mind you, but still these are the only three with a plus sign in the comparison. Those of you who saw Alonso and Gonzalo at a 7 or better would you mind sharing your thoughts in the comments below? Love to hear them.

Marco Pappa: 6.59 (7) -0.41 I named Pappa my man of the match, and he received the highest score from readers. Still, it's telling what people thought of this game that the highest score was a 6.59. There were a couple of comments in the thread of the Sunday piece that pointed out that Marco's influence on the game seemed to decrease later in the second half. I agree with that. My notebook was chock full of Marco moments in the first 45 minutes, especially from minute 10 through 45. Not so much in the second half. But it was that kind of game. I think we should all be pretty pleased with the point on the road in this one. 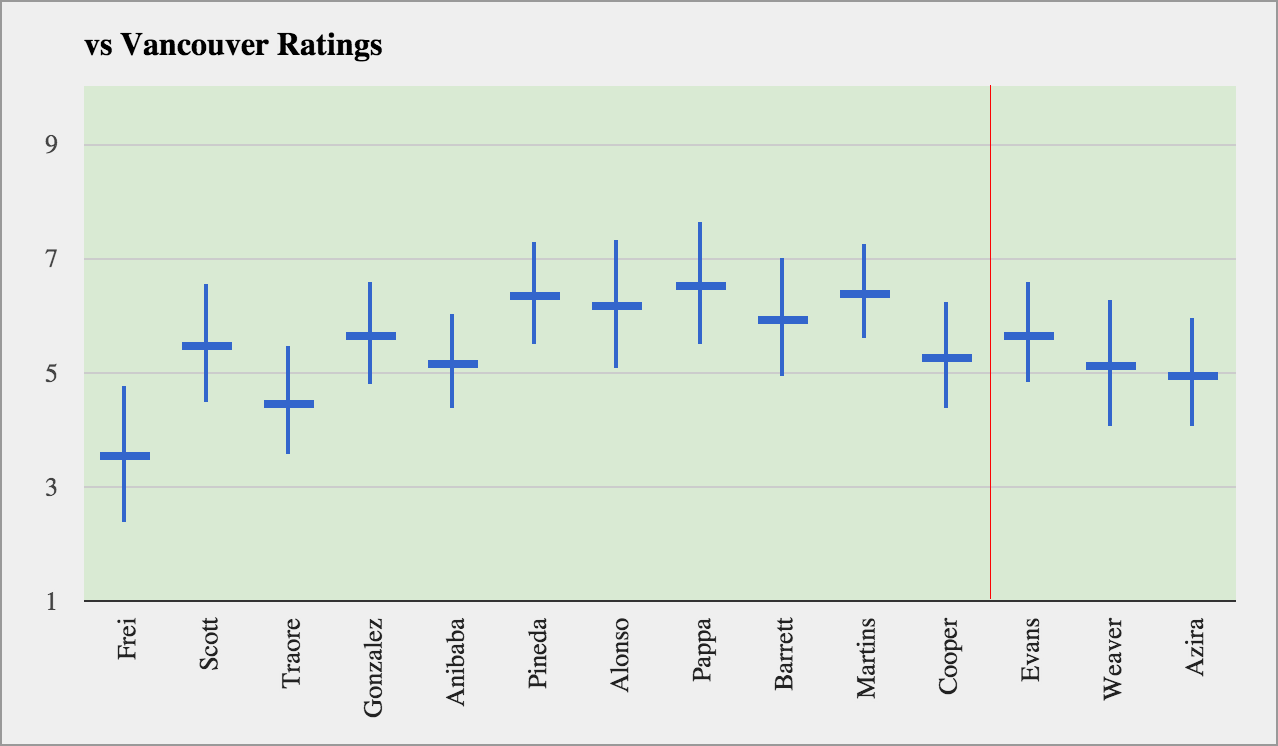