What Is Gonzalo Pineda's Midfield Role?

12 games into his Sounders' tenure, Gonzalo Pineda's ideal role - and how he fits into a consistently performing midfield - remains poorly-defined.

Share All sharing options for: What Is Gonzalo Pineda's Midfield Role?

Back on May 16th, referring to the New England Revolution debacle, I wrote this, concerning the performance of the Seattle Sounders midfield in the first half:

In that stretch of time to 35:44, the two central midfielders accounted for two defensive actions (both Alonso) recorded in the defensive half. Only one came before the second goal. None came before the first goal. For the sake of comparison - in the first 30 minutes of the last three games, Alonso and Pineda were responsible for 6, 9, and 9 defensive actions in the Sounders' half of the field... Fortunately, the CM performance Sunday seems an aberration.

Now that this particularly rare circumstance has come twice in three games, I'm still more confident it won't happen again so soon. Let's take a look at the midfield defense through the first half of the 2-2 draw in Vancouver. 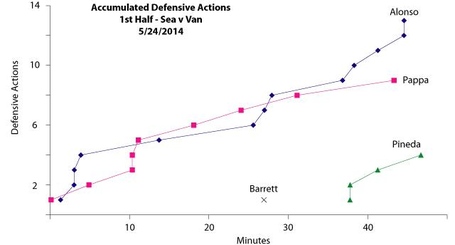 Osvaldo Alonso didn't lose track of the game, exactly, though his registered defensive actions are recovery-heavy, and his 1v1 defending was uncharacteristically weak, particularly on the first goal. Pineda, on the other hand, failed to register a defensive action until an interception/recovery couplet in the 38th minute. Chad Barrett was defensively nonexistent on the right - his one registered action being a failed tackle in the 27th minute. Vancouver generated 11 shots in the first 38 minutes of the game, 4 of them coming from inside the penalty area, and only 1 required a save. Marco Pappa tucking inside (partly by design) helped salvage the defensive midfield, but that role isn't exactly a recipe for long-term success. Pappa proved stronger in defense than is commonly believed, but he's neither a very strong nor a very agile tackler, and a defensive role takes him far away from the opposing goal.

I've pointed out before how statistics can be used to differentiate midfield roles. We've had 12 appearances to look at Pineda's play. How do these performance compare to other Seattle midfield roles, and to one another?

Pineda very likely needs a break. Andy Rose, after putting in a reasonable shift against Montreal, has scarcely been seen.

Still... all this may be the wrong way to look at the issue. A Gonzalo Pineda who is not Seattle's second central defensive midfielder nevertheless remains the possession-holding central deep-lying playmaker Shalrie Joseph should have been in 2013. He doesn't have the pace or range to do Alonso's work, and trying to fill that role would likely take away from his other strengths. If he is to take a lesser role on defense, however, Seattle may need to account for that in other personnel more effectively than was done against Vancouver.