Chad Marshall surpasses Dempsey with the highest score given by readers so far in 2014.

Chad Marshall's outstanding defensive effort and game-winning goal led to the highest rating of the 2014 from Sounder at Heart readers. Nearly 760 reader ratings were cast following Seattle Sounders FC's 2-1 home victory over Philadelphia. Marshall ended up with an 8.96 from readers, slightly higher than the 8.84 Clint Dempsey earned the week before.

Obafemi Martins was second in readers' minds, with a 7. 45 - fractions ahead of Marco Pappa, who finished with a 7.40. The rest of the team was somewhere between the 4.88 that Lamar Neagle received and the 6.87 earned by Dempsey.

Here's the full look at this week's community ratings. Reader scores follow the player's name, followed by my ratings in parenthesis and then the difference between those two numbers in italics.

DeAndre Yedlin: 5.93 (7) -1.07..I pondered the difference between my rating and the community's for a while and came to the conclusion that I am perhaps more concerned with Yedlin's defensive performance than I am what he adds to the attack. I thought he had an almost flawless game on defense and that led me to a higher score than what readers saw. Yes, I love what he brings to the attack. He is perhaps a singular talent in MLS in terms of his ability to make right back into an attacking position. And I'm always glad when he is flashes that ability, but not at the expense of defensive positioning and locking down his side of the field, which it seemed to me he did pretty well against Philly.

Chad Marshall: 8.96 (9) -0.04 A quick count showed more than 180 of you gave Chad a perfect 10 for his six-block, game-winning-goal performance. Obviously some of you gave him an 8 as well, and a there were a handful of 7s recorded, which led to the community rating just a hair below 9. Marshall has quickly won over Sounders supporters. I even read in some of the threads he's earning nicknames like "Air Marshall" and "Beast Mode." That's fun, of course, but the important thing is that his performances have been rock solid all season. Given what the Sounders went through at the end of the year last year, when the defense and goalkeeper seemed to fall apart at once, it's easy to see why Sounder at Heart readers are so pleased by what Chad has added. And this was a magnificent performance. I have been straining my brain for a couple days now trying to remember any performance by a center half as good in the Sounders 5-plus years in MLS and I just can't remember one.

Lamar Neagle: 4.88 (4) +0.88. I find it interesting that the community rating for Lamar was nearly a point higher than mine this week, especially given the conversation that went on in comments under my ratings. There were some pretty harsh words said there, and some defending of Lamar as well. I agree with one point made - the Sounders are so much more skilled now as a squad that a player of Lamar's caliber occasionally looks worse than he is. Harken back with me, if you would, to the time when only Alonso, Keller and Montero seemed to have above-average skills for the Sounders. That is no longer the case. Martins, Dempsey, Alonso, Marshall, Yedlin, Evans, and probably Pineda, could start for any team in MLS. We are blessed to be watching this squad, but I think the comparisons hurt Lamar at times. The guy has been good most of the games this year. He has goals, assists and is a danger that opponents must worry about in the final third. Is he Clint Dempsey or Ozzie Alonso? No. But honestly wouldn't you rather have Lamar than Philly's Sebastien LeToux? Seba is a legend to me and many others, especially from the pre-MLS Sounders days. But I think Lamar is a better soccer player despite a rough outing against Philly, and I expect he will continue to perform well over the course of a full season.

Obafemi Martins: 7.45 (6) +1.45..Hmmm. I'm not sure what happened with the ratings here - why mine and the community's are so different. Despite his goal, I thought this was one of Oba's lesser performances so far this year. Obviously Sounder at Heart readers disagreed, scoring him second-highest in the squad against Philadelphia. I'm interested to hear more from those of you who scored Oba an 8 or higher in this game.

Marco Pappa (51st minute): 7.40 (8) -0.60..It appears that Marco has finally played his way back into the good graces of Sounder at Heart readers after a rocky start this season. A lot of the discussion in this week's ratings thread was about how he has earned a start. I imagine we will see one this week given two more games on the schedule. It will be interesting to see how he does in a full-90 performance. Will there be lags or mistakes in judgment? The performance against Philly seems to suggest not. Marco simply changed the game and was a key reason the Sounders won.

And from Sidereal, a graphic look at the ratings. The roster is roughly ordered from front to back, with subs at the end. The horizontal line is the mean player rating and the vertical lines extend to the standard deviation in each direction. 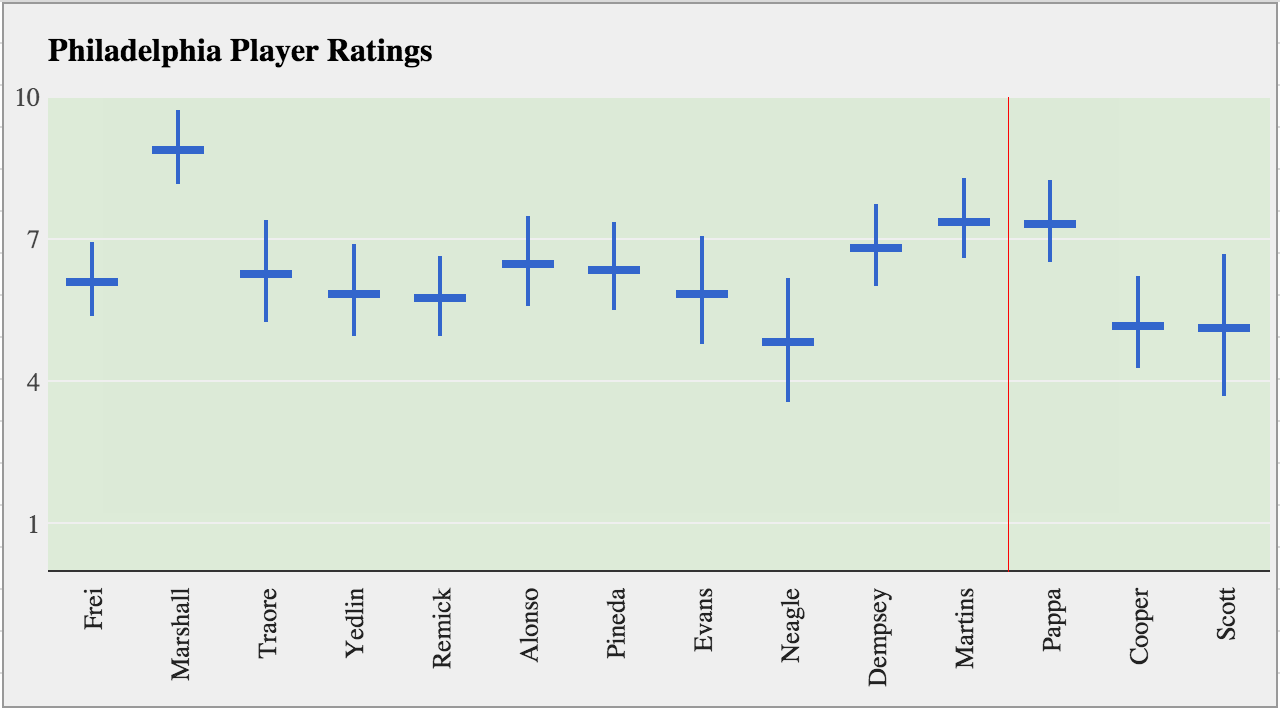