Frei earns highest rating of the year as his saves preserve the road victory for Seattle.

Stefan Frei received his highest rating of the season from the Sounder at Heart community in Seattle Sounders FC's 2-1 win in Chicago.

Based on three really great point-blank saves, Frei was Man of the Match for the first time as a Sounder as he single-handedly preserved the victory in what was a pretty messy performance.

Still, SaH readers were pretty forgiving of the players after earning the three points on the road, with only Jalil Anibaba and Chad Barrett finishing below a 6 on averages from the more than 400 reader ratings ballots cast.

Here's the full look at the community ratings for this game. Reader scores follow the player's name, followed by my ratings in parenthesis and then the difference between those two numbers in italics. Look for a story sometime in the next 10 days talking more in-depth about how the ratings have gone so far this season.

Stefan Frei: 7.48 (7) +0.48 Stefan has had doubters this season and his ratings throughout the year have reflected that. But he left no doubt in this one with three magnificent saves on point-blank shots that could have cost the Sounders three points on the road. Readers rewarded that effort.

Jalil Anibaba: 5.61 (7) -1.39 I guess it shouldn't be much of a surprise that Jalil's rating from the community here is significantly lower than mine based on the comments with Sunday's ratings story. As I promised in that thread I went back and re-watched Jalil's actions on both goals and on the three spectacular saves that Frei made. On second look I understand the complaints about the time he didn't clear the line with the rest of the defenders on a short corner, instead deciding to man-mark Bakary Soumare, which resulted in Jalil holding two players onside that would have been offside had he stepped up. I'm not sure about his decision making in that case. On the other hand I saw nothing wrong with his play on either of the two goals nor on the two other great opportunities Chicago had. If I go back and look at my impact plays notebook and subtract a mark for the decision not to step up on the short corner I still have him at plus-5 for the game, which still leads me to a 7 rating for the game. Love to read some more discussion of what others think about that. Am I missing more? What did y'all see that you think I have missed?

Lamar Neagle: 7.01(7) +0.01 It's no longer surprising to read in every ratings thread that someone thought Lamar was poor. But I think maybe this week's community rating shows that people have better defined their expectations of Lamar. A good game for Lamar almost always includes some giveaways that you wish he didn't have. A "very good" 7 game has a couple of those, but also includes a goal and some threatening runs, as this one did, especially in the second half.

Obafemi Martins: 7.15 (6) +1.15 Oba had two goals and a red card in the first half. I think the community score here, the second highest given by readers, speaks as much to what readers think of the refereeing in the game as it does about how to score someone who gets two goals and a red card. I believe, based on the rating and comments in the game thread and other threads, that the majority of Sounder at Heart readers believe Oba didn't do anything to deserve the red card. That's fascinating to me. None of us has seen an visual evidence of what did or did not happen. Is it just that we all like Oba and doubt he did anything to deserve the red? That may be part of it, but I think more than that we all just assume the referee screwed up and made a bad call. That really says something about the trust people have in MLS refereeing, I think. We don't know for sure, but we just assume they made the wrong call.

Kenny Cooper (66th minute): 5.49 (7) -1.51 If I understand what people were saying about Kenny when they made this rating they were pretty concerned about two runs Kenny made with the ball that were pretty poor, especially one where he probably should have run the ball into the corner to kill time but instead just gave up possession easily. To be honest, neither of those runs even made it into my notebook. They seemed rather inconsequential. What was of consequence to me was the great header he made to a wide open Lamar Neagle that ended up winning the game for the Sounders. That header and a couple other nice moves earned him the 7 from me, but I do understand why others went so much lower. 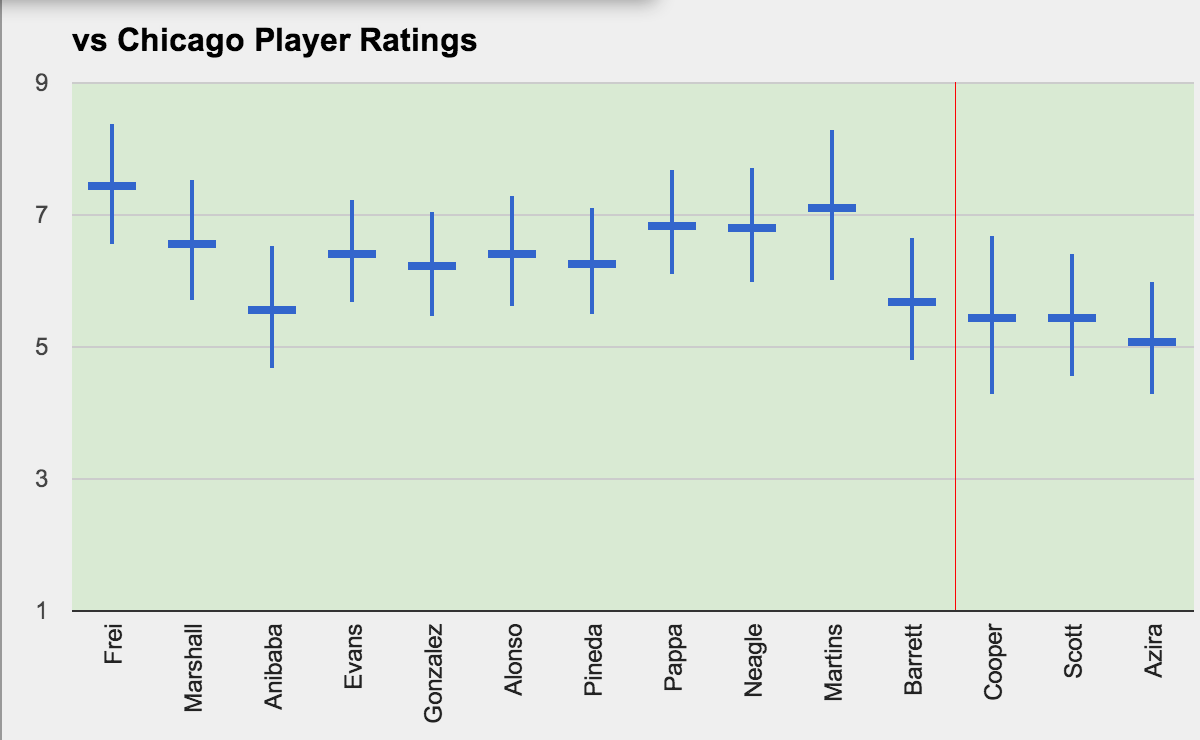