There's also some World Cup related stuff you should read.

This isn't really soccer, but it's pretty big if you are a cord-cutter or have WiFi devices in a high density area. Comcast just granted you access to the routers of their subscribers. It supposedly won't slow the subscribers bandwidth, nor threaten their home router security.

Some Turkish site thinks that Oba's going to leave Seattle. But you've seen all the hugs and love he has for the area. Are you going to believe a random Turkish site or OBAFEMI MARTINS?

I hope to stay in Seattle Sounders for long term...❤️ the fans

The team is taking time off. Alonso went to Hawai'i and Pineda is in Legoland.

They'll be back at it next week, because Starfire is coming.

D.C. United is in first in the East thanks to Luis Silva. It's not just because the East is weak, they sit on 25 points and are 2nd in the Shield race.

Draw City did their thing. It took a couple reds for Dallas, but the mighty fallen trees pulled even. They are now 1-1-7 at home. Less of this and they'd probably win more often.

San Jose won their match at Kezar Stadium 2-1. The gamewinning goal was scored by former Sounder Cordell Cato, of course. That means that they will face the winner of Sounders FC and PSA Elite.

Houston beat the Laredo Heat but had an odd thing happen. Their backup keeper earned a red. Their third keeper is cup tied. Good luck in that next round!

.@AlsaddSC have reportedly entered negotiations with Barça/Spain star Xavi who, he himself, welcomed the offer. #QSL pic.twitter.com/hhBWJ1DGue

Al-Sadd is supposedly losing Raul to the Cosmos. You may know of them because you stalk me, or because they won the AFC Champions League a couple years ago.

Let's do this quick - Belgium got scared (of traffic), Landon's going to commentate, the field in Manaus sucks and Timmy Chandler was held out of practice. This is supposedly precautionary.

USSF/PRO referee Mark Geiger will be at the World Cup.

Geiger, who has officiated professionally since 2004, will be the first American referee to participate in the World Cup since 2002. Geiger is guaranteed to referee only one game; which one won't be decided until a few days in advance. On the basis of that initial performance, he may be invited to continue working as the tournament progresses. He partially attributes the honor to a fitness regimen designed to help him keep up with the world's best players.

SPOILER - He runs a lot.

This soccer thing is pretty big. It's also actually global, and that's probably why World Cup adverts are already more shared than Super Bowl ads. This one from Hyundai didn't get shared a lot. 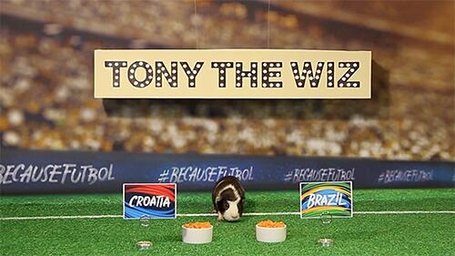 Sepp Blatter spoke yesterday. You didn't like what you said, but probably don't quite hate him. He was more dislikably funny (that's a word!). There's a reason for that. Hate is really powerful. If people hate Sepp they might actually act against him. You can also use hate as your guide to the World Cup. Which nations should you hate? ALL OF THEM.

Another way to watch the World Cup would be by drinking the beers of the nations participating in the day's match. I'm not trying this while at WoB-Renton (where I'll host the Day One World Cup Open Thread), but that's mainly because popular beers look pretty awful.

We're looking for a new links post person. The real/non-SaH world is calling Randy's name so he's focusing on that now. I'm going to miss the crap out of his input in the SaH group as we tried to improve what we do and his writings about trialists helped me learn.