With a two month gap in the publication of a depth chart there is a bit of clarity. Both MLS matches and Reserve games are taken into account. So is the rise of someone who can only be called a local star.

Share All sharing options for: Depth Chart: 3 XI - Revelation of the Year

Back in April the thought was that Seattle Sounders FC seemed to be settling into a 4-3-3. That experiment lasted just three matches and the Reserves never used it, nor did the Academy  (they are in 4-2-3-1 or 4-1-41 most often).

A few other things have changed in the weeks since that chart came out. Playing time for Kenny Cooper faded away. Lamar Neagle's time has not faded. He's a key cog to the Rave Green machine, a head of the hydra. He and Marco Pappa (not yet quite a head) are listed on the right and the left. That's basically meaningless as they switch so much that an average position map puts them in the middle. But that's not true for the secondary wide players. Cooper and Okoli play on the right. Barrett, Bowen and Kovar on the left. It shouldn't be a surprise, but when depth is tapped fluidity decreases.

Lamar's been awesome. I've doubted, but at some point performance has to trump projection. I'm at that point.

The next thing you are going to notice is that Brad Evans isn't listed as a starter within the Ideal XI. That seems kind of absurd as whenever he's healthy and present he starts. There is no reason to think that doesn't remain true. The difficult part of B-Rad is that it is no longer possible to project. He's started at right back, left back, right mid and center mid within the last full season. He's also got some time as a centerback. In previous years he's been a forward. Evans will be right at 1500-1800 MLS minutes this year without a locked in starting spot.

That brings up something else. A request was made to try to indicate what a player's primary, secondary and tertiary roles are. That's now on the depth chart. Evans has four roles (and could be more but wide mid and fullback aren't broken out by side). The other two with more than two roles on the club are David Estrada and Aaron Kovar. Both have significant Reserve time as an outside back, but when they play there they get forward as much as a Yedlin or a Remick. Kovar's future may be as a modern deep-playmaking left back even (yes, I'll get a full post on that).

Here's the chart. A legend is included. 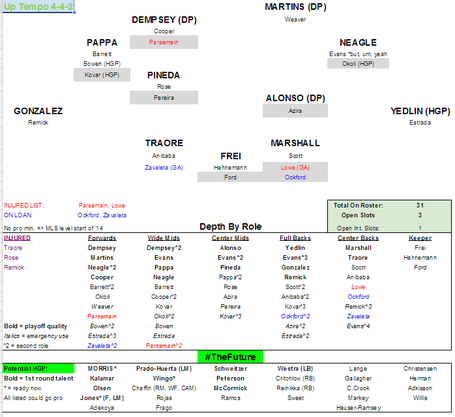 Let's talk about The Future for a bit. There are indications now for multi-position guys. Adjustments and additions were made for kids that have multiple calls to the Reserves. Jordan Morris is also called out even more than in April. He's ready and a "lottery pick" to borrow from other US sports. When he plays for the U23s he changes the game. Henry Wingo was also bumped up to ready now status. He's started one Reserve game and appeared in two more. He showed well. It is unlikely that he signs before college, but if Seattle had a USL PRO team right now he's ready.

The backline down in the potential future is a bit weak. Every CB has questions. Only one of the fullbacks seems like a first round talent and he's the youngest on the chart and therefor the least likely to meet his potential.