Without a traditional target forward Sunday Jurgen Klinsmann changed his lineup up and leaned on Sounders forward Clint Dempsey in a different way.

Share All sharing options for: Clint Dempsey displays new side as hold-up man

The role of the target forward is rather familiar at this point. They are generally a big body with two primary purposes - hold-up play to get midfielders into the attack, a head to score goals. Without Altidore the United States has zero men that fit that billing. And yet Jurgen Klinsmann went with a single forward set. That forward was Seattle's own Clint Dempsey, as Sounders fans have learned their target man doesn't need to be a big body. Instead strong ball skills can give the rest of the team time to enter the attack. 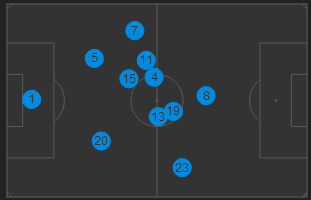 He was on the island, exactly as the revealed formation should play. High and alone his back to the Portugal defense he would be forced to try things in a different manner. Unsuccessful at take-ons (2 for 7) it was his backwards passing that was stunning. Whether short flicks to Michael Bradley or wide balls to Graham Zusi and Fabian Johnson Clint succeeded. The creative forward completed 93% of his passes. Yes, most were square or to the rear. Portugal's Ronaldo tried passes in similar fashion, and wasn't as good at it (73%). 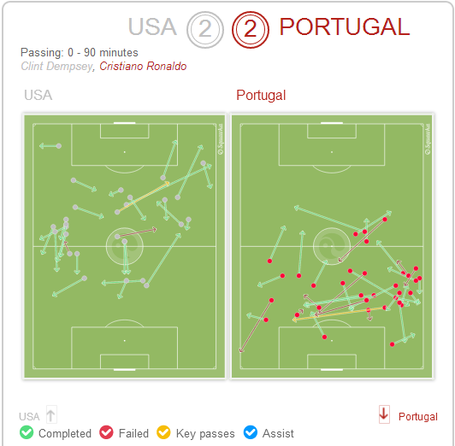 The Americans needed to change how they attacked when they chose to go with a single forward. That choice went two ways - Dempsey as the hold-up man and Fabian Johnson as an attacker.

In some ways it is similar to how Seattle plays, but with better overall players. A smallish, non-traditional target man that works flicks with a deeper, creative partner (Oba to Clint) and a right back the surges up the right so much that he's basically a midfielder.

Clint took on a new role. He scored. He still took five shots. He linked his island with the other key offensive pieces. His role on Thursday may be different again.