Seattle Sounders FC players were very good in the 4-0 win over Real Salt Lake last Saturday. In the player ratings this week, 9 of the 11 Sounders starters received nearest to 7 from Sounder at Heart readers, when the averages are rounded. Seven is the figure that we label "very good" in our word descriptions of the ratings we give out.

Marco Pappa, at 8.25, finished significantly higher. Only goalkeeper Stefan Frei was lower, finishing at a 5.89 average, closest to a "good" rating of 6.

I guess that’s what happens when you dominate a team. Everyone was good in this game and the Sounder at Heart community rewarded that effort.

Here’s the full look at the community ratings for this game. Reader scores follow the player’s name, followed by my ratings in parenthesis and then the difference between those two numbers in italics.

Leo Gonzalez: 6.50 (6) +0.50  Leo’s score showed the biggest difference between the community and what I put down. I think it’s fair to say that Sounder at Heart readers really appreciate what Leo does on a week-to-week basis. There are so few legitimate scoring chances that come down his wing. My scoring system probably doesn’t recognize that kind of play enough, honestly. I need to work on that some so that rock solid play gets as rewarded as the flashy impact plays I jot down in my notebook.

Marco Pappa: 8.25 (8) +0.25  Marco was man of the match for the second week in the row, in both my ratings, and in those of Sounder at Heart readers. Can we all take a second to remember when people were arguing about whether he should get another shot in the lineup following his two-goal-creating-mistakes game earlier this year? He is really rolling now, shining particularly in the absence of Clint Dempsey as he becomes a bigger part of the goal-chance creation. And as I mentioned on Sunday, his defense in this game was the best we have seen from him. Two great weeks from Marco in a row. Here’s hoping he lays down another stellar performance against his old team in Chicago this weekend.

Chad Barrett: 7.04 (7) +0.04  I was surprised to read a couple negative comments about Chad in the thread below Sunday’s player ratings story. I thought he was fantastic. I’m not sure Chad will ever be the kind of player who can score a 10 – with stellar passing, goal-creation, goal scoring, etc. But I thought he put in a very, very strong effort Saturday and am pleased the readers’ average rating recognizes that as well.

Andy Rose (90th minute): 5.39 (incomplete) ~  A quick note here. Someone asked in the other thread what we do with the zeroes that pop up when readers vote for "incomplete." We go through the spreadsheet and remove them, replacing them with blanks. The difference is often startling. Before I removed the zero/incompletes for Andy this week his average score was 1.70. As you can see those that did place a vote for Andy gave him a 5.39. The majority of people chose the zero/incomplete option, which makes sense to me for a guy that played only a couple minutes and was basically subbed in to kill some time. 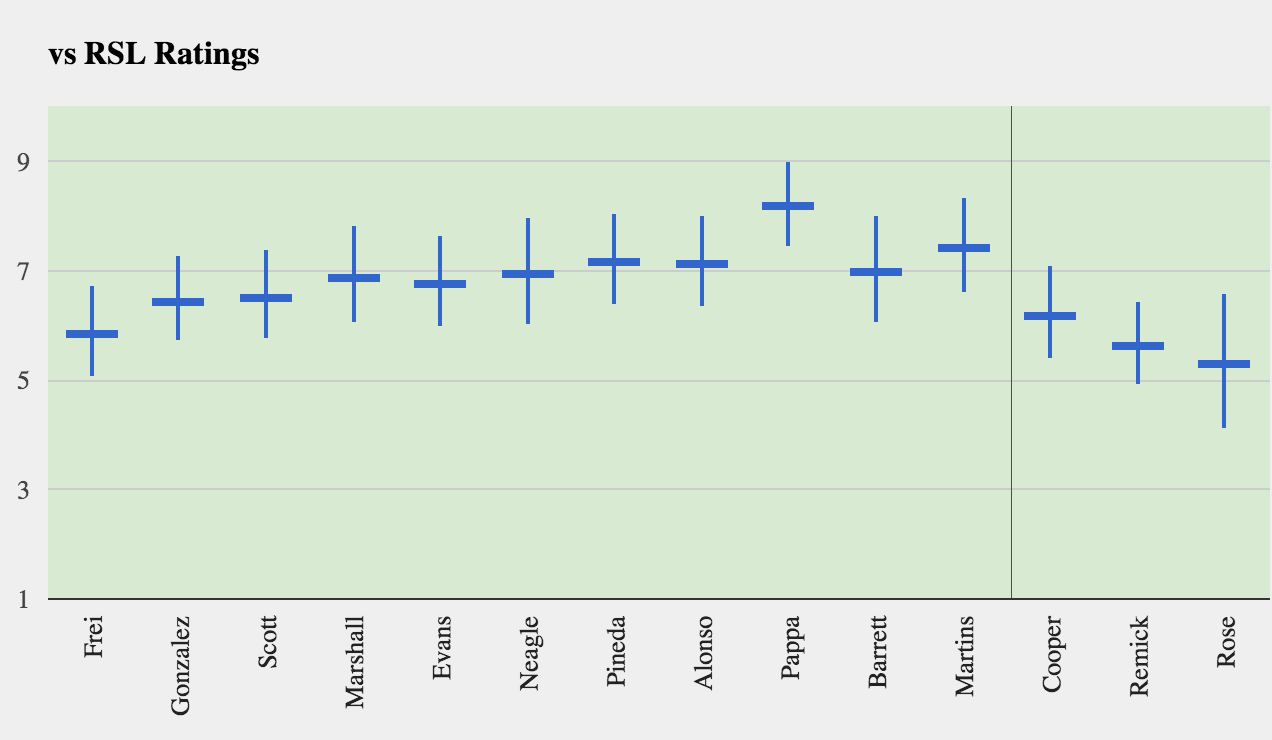