The Sounders once again travel to the Eastern Conference, hoping for a better result this time in the last match before the long World Cup break.

Hello, friends. It is usual when preparing a scouting report to focus on the most recent game played by the opponent so as to get a look at their freshest ideas and lineup. But Chicago's most recent game was a reserve-laden 0-0 midweek draw with Colorado that even a Hot Time in Old Town commenter described as "quite possibly the worst played game I have ever seen". We are not good enough friends that I would subject myself to that. Like most of the rest of the civilized world, I will proceed as if that game never happened.

To be fair, it isn't unreasonable for the Fire to go into the midweek game with a defense-first approach. Before the match they hadn't earned a shutout all season. So needing to see some defensive solidity on the road in the middle of a three game week, Frank Yallop deployed a lineup with four defensive midfielders, one box-to-box shuttler, and a lone forward extricated from the reserves — and proceeded to get no shots on goal and get out with the 0-0 draw he was playing for from the first minute. So would Chicago do that again, at home against Seattle in the final match before the World Cup break? I really doubt it. Instead we should see the return of the starting contingent that guided the team to 6 draws in their first 7 games.

The Fire seem to be in the midst of a tactical transformation. Their stats are artifacts of their early season, when they played as you'd expect a team to play under Frank Yallop: Architect of the San Jose Earthquakes. They still lead the league in accurate corners, in headed goals, and are tied for the league lead in PK goals. They're one of the top teams in set play attempts and free kick crosses, all hallmarks of the Earthquakes Way.

What makes that style slightly awkward for Chicago is that they don't have the tall, physical forwards to create danger in the box. Their best header is probably DP Juan Luis Anangonó, but for whatever reason (that a closer follower of the Fire could probably explain to you) he's almost exclusively a sub. Their best attacker this season is Quincy Amarikwa, who's had a sensational start to the season but isn't particularly well suited to the role of target man. Mike Magee was supposed to be their attacking talisman, but he's been out injured (and is questionable for this match) and is an even worse candidate for target man.

And the other consequence of that style is that it pushed their best supplier of crosses — homegrown rookie Harry Shipp — out to the wing to do his best Brad Davis impression. It's a role he's thrived in despite his tender years. His 4 assists leads the Fire and his 3 goals is — setting aside penalties — second only to Amarikwa.

But perhaps due to the awkwardness of playing head tennis without a target man and perhaps due to a desire to get Shipp even more involved in the run of play, over the last few games Yallop has moved the rookie into a CAM role behind Amarikwa in a 4-2-3-1. The double defensive midfielder line of Jeff Larentowicz and Chris Ritter has helped stabilize a leaky defense and the offense has transformed to one predicated on Shipp spraying through-balls to the wingers and forward.

The Fire only have 1 goal in the two games they've tried in the new setup, but they've also only allowed 1. So it remains to be seen whether Yallop considers that a fair tradeoff or whether he tries to move Shipp back out to the wing to pump in more crosses. 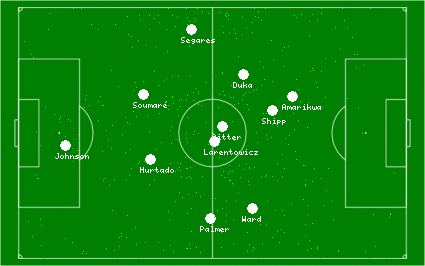 Regardless of the setup, there will be familiar faces on either side of the halfway line. In the offseason, Seattle traded Jhon Kennedy Hurtado and Patrick Ianni to Chicago for Jalil Anibaba to free up cap and roster space. Of the three only Hurtado is likely to start and he should have plenty of opportunities to re-acquaint himself with Obafemi Martins. And the Sounders will almost certainly be deploying Marco Pappa, who was a Fire mainstay for years before transferring to Europe and who very nearly became a Fire again, if they had been able to work out a deal with the Sounders for the top allocation spot in the preseason.

For Seattle, there's no reason to expect any major lineup changes. This is the last match before the long break so there are no fitness concerns, and the current lineup has certainly been successful. The only significant questions are whether Zach Scott will continue to fill for the injured Djimi Traore and whether Brad Evans will continue to play at right back. In both cases, the most likely replacement would be Anibaba, but I suspect he'll start this one on the bench. Scott is a solid player in the air, which isn't necessarily a great matchup against the Fire roster, but it seems to be a great matchup against Yallop's preferred style. And moving Evans out of right back and into the midfield would disrupt the very good play that Lamar Neagle, Pappa, and Gonzalo Pineda have produced recently.

For all the advantages Seattle has on paper — and they have many — it's important not to forget that this is a road game in the Eastern Conference. Last time Seattle traveled to the far east it was to get pummeled by the Revolution and look listless the entire game doing it. The Fire do not offer much of the same kind of challenge that New England does, especially since speedy winger Patrick Nyarko is out injured, but there are still lessons from that game about the wear and tear of travel and the dangers of underestimating an opponent.

The focus here has to be getting a good result to rest on for the next few weeks. Because stewing over a bad road loss would be an awful distraction from the World Cup.