Mascherano tore his "anus". Messi is a dog. Seattle is America's top soccer city. When Turkish scouts are human traffickers.

Share All sharing options for: Major Link Soccer: Down with Timbers Week edition

It's officially Down With Portland Timbers week, and there's no better way to start out the day than with a steaming cup of Timbers fan tears.  Sure, you can go read the match thread on Stumptown Footy from Wednesday night and browse through the howling and histrionics.  But on a subtler but even higher level, reading this recap from our sister site with it's dry tone and lack of adjectives is so satisfying.  Yes...let the sadness flow through you.

Getting the Open Cup out of the way, here is Hot Time in Old Town's recap of their own quarterfinal victory over the Atlanta Silverbacks (or, how they "survived" the game).  Might be interesting reading as we look forward to the August 13th matchup with CF97 back at Starfire.

The Sounders U-23's round up the PDL season with two home games in the next week: Sunday against Victoria at 3:30 PM and Wednesday against Kitsap at 7 PM.  Both games are at Sunset Stadium in Sumner and tickets are available here.

Former scab replacement referee Alan Kelly will be the man in the middle at the CLink this weekend.  Lets hope his whistle is warmed up.  At least Diego Chara is having a time out.

Speaking of buying tickets to see soccer players in rave green, if you're planning to purchase either the 4-match package or tickets to the individual Tottenham game OR Sunday's Timbers game, check out these promo codes courtesy of Washington Youth Soccer.  Use the codes and you're entered to win signed Sounders merchandise or a VIP Tottenham "experience" which includes a meet and greet with players and such.  You're welcome.  You just have to invite me along as your 'seeing eye person' if you win.

Need more ways to troll your favorite Portland fan this week?  Here's the link you need.  US Youth Soccer has used Brackify to match American cities head to head in a tournament format to determine America's top soccer city.  Over 20,000 votes later, and, well... just click the link.

If you're like me and don't live in Seattle anymore, you rely heavily on your laptop (or Apple TV, etc.) to watch your beloved Sounders.  MLS Live is a lifesaver in that regard, and you can still pick up a pass for the rest of the season for just about half price.

MLS teams are predictably shaking up their rosters as we enter our mini midsummer silly season.  The folks at MLSSoccer.com think the Sounders are one of six teams that should be looking for a center back.

Chivas USA have somewhat puzzlingly waived longtime backup goalkeeper Tim Melia.  The Goat Parade considers what the logic might be considering  he wasn't really breaking the bank at around 70k in salary.

LA Galaxy have terminated their loan of Samuel and sent the Brazilian packing back to parent club Fluminense.  Or maybe the Brazilian club was tired of Samuel not seeing minutes and called him home to grieve with his nation?

Sometimes when your team is going through a midseason slump, you have more questions than answers.  If you want to remember what that feels like, check out The Bent Musket's question and no-answer session.

Virginia Cavalry FC's debut in the second tier of US soccer is delayed again.  They will now (maybe?) be joining up for the 2016 season.

NASL Commisioner Bill Peterson is talking the state of the league.  TLDR? More Canadian teams.  Miami and Hartford are other possibilities.  Split Season.  Much more at the link.

Tab Ramos has named his roster for the US U-20 National Team's upcoming NTC tournament in California.  (7 MLS-ers.  No Sounders.)

15 years ago yesterday, the USWNT (and every gosh-darned citizen of this fine country) became world champions.  Remember this pivotal moment in US Soccer history.  Goosebumps.

Javier Mascherano is a brilliant and tough player.  So tough, in fact, he is not afraid to say straight-faced: "I tore my anus."  to a roomful of reporters.  That is all.

Can you sum up how an entire country feels about the performance of their national team at a World Cup finals?  Can it be done in three words?  Thanks to data, yes: 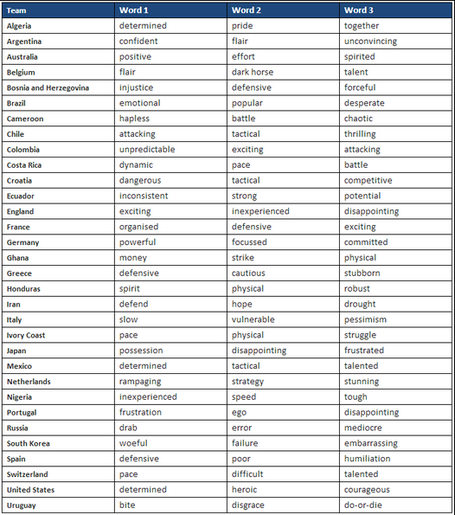 Here's some nice pre-final reading.  How did Argentina defend their way through the knockouts?  Pictures and heatmaps and analysis and other stuff we like.

Ray Whelan, an executive from the World Cup's hospitality services firm who is accused of lining his pockets through various under-the-table World Cup ticket sales, probably isn't guilty.  Although he did, you know, sneak out the back door of his Rio hotel and disappear into the night, according to this report.

Alexis Sanchez to Arsenal is official.  One imagines that the bitey one from Uruguay will be headed Barça's way shortly.  More transfer stuff here from Soccer by Ives.

TIME.com has shared a photo story by Jason Andrews called "Nowhere to Go" that chronicles the dark side of scouting for the next soccer stars in impoverished parts of West Africa: human trafficking.  Poor families are charged large fees by unlicensed agents to send the young players to Istanbul with the promise of a soccer career, but the young men are abandoned without help.  In other words pure evil.  But check out the amazing photographs.

This video is a little long, but stick with it.  An old man narrates an endless highlight reel of Lionel Messi's unstoppable desire to put the ball in the net.  It's about his dog.  It's about Messi.  It's about the history and culture of the sport.  Messi is a dog.  I was hooked.  [Note: Turn on the subtitles.  It's the little "cc" button.  There you go.  Yeah I didn't know that's what that was either.]

Finally, because even though some of us might be hardened, bitter, misunderstood soccer fans, we can still laugh at the sometimes-ridiculous side of the sport, here is a brilliant little video about flopping in real life: