We have a winner in the World Cup challenge! And the Fantasy Cup starts in Round 20, so it's a good idea to start buttressing your squads.

What an exciting week we have in MLS Fantasy, with eight (8!) teams posting double game weeks. But before we get to that, we have a champion in the World Cup challenge. The mysteriously-named agentpebble topped the Sounder at Heart league with 410 points, correctly picking Germany over Argentina in the World Cup final. agentpebble's quarterfinals were rock solid -- he only missed one result, which was having Uruguay in the quarters instead of Costa Rica. Check it out: 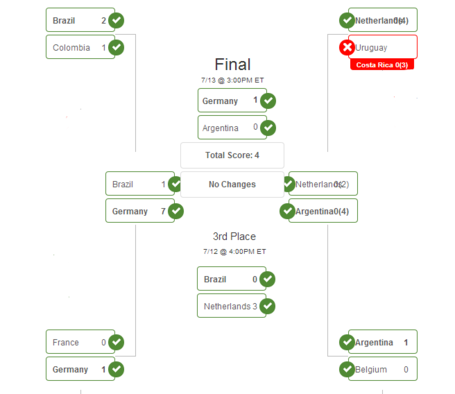 In the classic league, Paul V's -Eternal- notched 64 points last round to stay atop the leaderboard. Remarkably, his team value + bank clocks in at an absurd $131.8m, which probably explains why he's got better players than the rest of us.

In the head-to-head league, Friberg Tacos FC has won five straight en route to a 14-0-4 records. But that is nothing--NOTHING--compared to yours truly (FC Okoli Dokoli) who has been punishing competitors to the tune of nine straight victories. We play one another this week in a derby-like atmosphere that will be sure to have the contributor league buzzing with excitement.

Back to the DGWs. Columbus, LA, New England, New York, Philadelphia, Sporting KC, Toronto, and Vancouver all play twice this week. With that in mind, here are a few players I think might help your squads.

Andy Gruenebaum, GK, Sporting KC ($4.4): Looks like Eric Kronberg out for up to two months, so in goes Gruenebaum.

Steve Clark, GK, Columbus ($5.3): If you're not going with Gruenebaum, perhaps you should consider Clark--the Crew are the only team to play their DGW at home.

Matt Miazga, D, New York ($4.5): The Homegrown defender has gone the full 90 in each of the last four matches and makes a good speculative play at a great price. Franco Panizo reports he's a good bet to start Wedensday despite having a rocky game this past weekend.

Ray Gaddis, D, Philadelphia ($6.3): Ray Gaddis continues to be a reliable member of the Union's back line and combined nicely with Conor Casey for the opening goal against the Rapids.

Erik Hurtado, MF, Vancouver Whitecaps ($6.3): Vancouver gets a tough roe to hoe with TFC and RSL away, but Hurtado's become a 90-minutes/game attacker for the Caps.

Dom Dwyer, FW, Sporting KC ($8.4): Another brace over the weekend. Is he American? Can we make him American?

Personally, I'm staying away from the Galaxy this weekend. They haven't scored more than one goal in a match since May and Robbie Keane's chance creation numbers are way down, according to Benjamin Baer.

Do you think any of those players will succeed? Feel free to chime in with your selections in the comments.