Seattle Sounders vs. Portland Timbers | First half tactical stalemate gives way to all out attack

The Sounders Timbers Cascadia Cup clash was a first half stalemate as neither team gave an inch. In the second half, they both went full throttle. Portland blinked first.

Share All sharing options for: Seattle Sounders vs. Portland Timbers | First half tactical stalemate gives way to all out attack

After facing each other for 120 minutes five days prior in the US Open Cup, the question was always going to be which team came out with a different look for their Cascadia Cup match on Sunday. With the return of Clint Dempsey to the Sounders fold and Obafemi Martins recovery from injury likely the smart bet was always going to be on the Sounders to throw a new dimension into the second match.

The sole change for Portland was the introduction of Darlington Nagbe for Gaston Fernandez while Sigi Schmid opted to bring in Marco Pappa on the left side of midfield from the start and use Clint Dempsey underneath Chad Barrett in a strike partnership. Neither move paid dividends in the first half

Timbers focus on eliminating Dempsey while Sounders block out Johnson 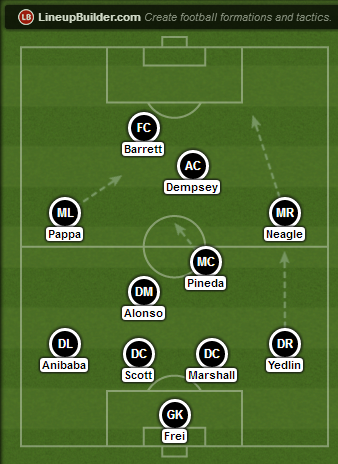 The entire first half from the Timbers consisted of one major defensive theme: man-mark Clint Dempsey. While the predominant effort came from Will Johnson, both O'Rourke and Jewsbury also stepped in from time to time to aid the Canadian. It was largely an effective strategy as Dempsey was forced to drop deep into midfield to find the ball leaving large holes in attacking midfield. This left a large amount of the creative attacking play on the shoulders of Chad Barrett and Marco Pappa who were frequently isolated from many of their counterparts as they advanced the attack deeper into Portland territory.

On the flip side, the Seattle Sounders opted to contain the main part of Caleb Porter's possession game, namely building from deep using Will Johnson and Jack Jewsbury. In games past the Sounders press upfront has been a large component of forcing opposition turnovers and generating quality chances. In this match, Dempsey and Barrett pressed the centerbacks conservatively opting instead to clog the passing lanes connecting the relatively green pairing of O'Rourke and McKenzie with Johnson and Jewsbury, while pressing aggressively when either of the holding midfield duo found themselves with the ball. Farther up the pitch, Diego Valeri and Darlington Nagbe's predispositions to drift centrally played into the hands of the Sounder defensive midfielders who set up shop quickly in front of the centerbacks, denying them the opportunity for time on the ball and restricting space for Adi. Without muchsupport through the center, Portland's newest DP had to resort to banging away at Chad Marshall. That results were the same as they were on Tuesday: namely to no avail (Adi won only a single aerial duel in the entire match). 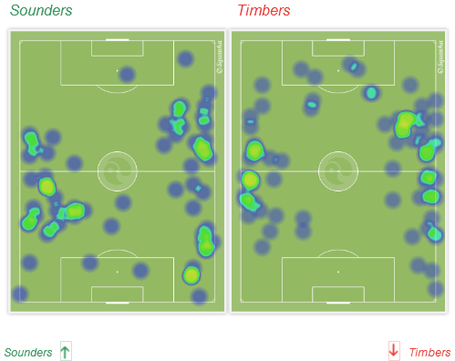 Fullback Heatmaps - First Half - via Squawka

With both sets of offenses well neutralized through the center, the onus from both sides in attack ultimately fell to the wings, and largely the fullbacks. A large reason why both teams ended the first half with a combined 9 shots, is that neither side committed their fullbacks to any sort of attacking. The deep runs at blistering pace we've come to expect from DeAndre Yedlin and the dangerous attacks of Jorge Villafana for Portland were rare and infrequent in the first half. Their counterparts on the opposite side in Anibaba and Harrington were even less proactive in their movements.

Both sides saw a need for drastic change at the half which they gladly obliged us with.

Unshackle the fullbacks and Hail Hydra 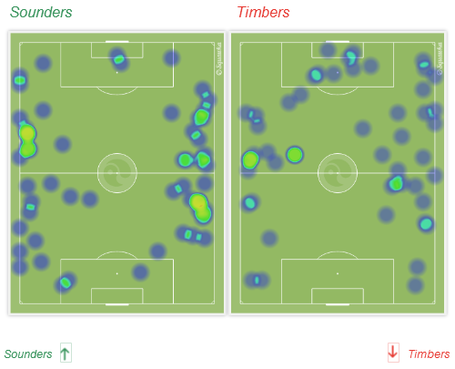 Fullback Heatmaps - Second Half - via Squawka

Bringing Obafemi Martins on for Chad Barrett early in the second half coupled with having Neagle and Pappa swap sides, succeeded in unlocking Clint Dempsey immediately. Using Pappa and Neagle as inverted wingers crashing the box gave both Johnson and Jewsbury too many targets to handle at once. Unable to man mark Clint Dempsey without conceding dangerous amounts of space, the Sounders attack interchanged and flowed at will. Obafemi Martins ability to drop deep further compounded the issue as the Sounders repeatedly targeted the Portland goal. Coupled with a brilliant move to ask Jalil Anibaba to attack on the left (given the acres of space conceded by Nagbe/Valeri) the Sounders attacked wide on both sides and recycled possession, sustaining pressure and penetration in the Portland half.

However, that same new found attacking ability came with a price as the relatively quiet Steve Zakuani found his legs in the game as an outlet for the pressure on the counterattack. While Zakuani was threatening at times, without any help from the invisible Adi the threat was relatively minor despite some very close shaves. As the minutes ticked by, Darlington Nagbe shifted out wider on the right bringing Michael Harrington into the counterattacks as well. This shift also had the intended effect of giving the Timbers some instances of sustained possession in the Sounders half. However, again without any effective help from Adi, the Timbers were relatively toothless in front of goal.

Through the 71st minute, the Sounders pounded away at the Portland goal while the Timbers counters presented real dangers to the Sounders. Rodney Wallace's introduction for Steve Zakuani change virtually nothing as he and Villafana put together a couple of excellent attacks down the left.

The 71st minute goal from Clint Dempsey was pure poachers instinct from Clint Dempsey coupled with Will Johnson switching off like a light bulb for 3 seconds. However, like any goal is want to do, it changed the complexion of the match. Now chasing the game and with the Sounders happily enjoying the bulk of possession, Caleb Porter brought on Gaston Fernandez for Diego Valeri in a move designed to increase the bite of Portland's counterattack. It was largely an effective move from Porter but it came with the caveat of completely ceding midfield to the Sounders.

Fernandez playing high off the shoulder of Adi, gave Alonso and Pineda a ton of room to work with, putting enormous defensive pressure on both Johnson and Jewsbury. While Johnson was able to cope,and still provide some attacking assistance from deep, this was too much to handle for Jack Jewsbury who wilted in exhaustion.

Porter goes big, Seattle eviscerates him for it

Ultimately, it was Caleb Porter who gave up the final goal to the Sounders. Bringing on Alhassan for Michael Harrington, Porter shifted to a 3-man backline, dropped Nagbe into the middle and gave the Ghanian free reign on the right. It was a go big or go home style of move.

And it backfired spectacularly as Neagle and Dempsey repeatedly ran straight down the throat of a wide open Portland defense (aided by an exhausted Jewsbury) in the stretch of three minutes. Marco Pappa had several bites at the apple before he scored the second goal of the game for the Sounders. Sigi Schmid immediately shut up shop bringing on the defensively oriented Michael Azira and Dylan Remick just to make sure a repeat of last Tuesday''s late equalizer would not be happening again.