Breaking down the Sounders' breakdowns

This wasn't fun and it wasn't pretty, but hopefully the Sounders can learn from their mistakes against the Galaxy.

Share All sharing options for: Breaking down the Sounders' breakdowns

Let's just put this out there to start: The Seattle Sounders played their worst 45 minutes of the season on Monday. That first half was a complete train wreck and no one is immune from criticism. The defense found itself misshapen and out of position. The midfield could not hold the ball. The forwards could barely find it. I could look at any number of plays and find faults.

But we're going to focus on the goals because those are most illustrative of the problems the Sounders had. And, boy, were there problems on all three goals. 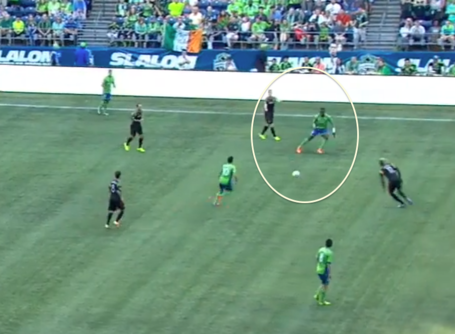 It all starts with Jalil Anibaba getting sucked deep into the offensive half. I'm not entirely sure why he was there, but he compounded the issue with a bad giveaway. Marco Pappa initially retains possession, though, only to give it right back, which puts the Sounders in scramble mode. 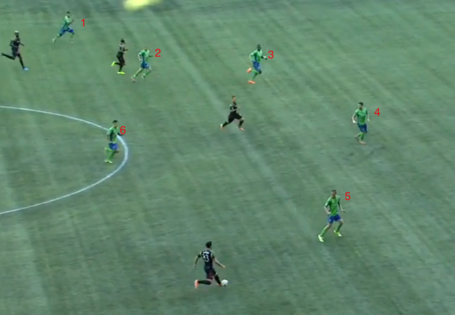 It's worth noting that even though they are scrambling, the Sounders seem to have the numbers to cover as there are six defenders to effectively cover four attackers. 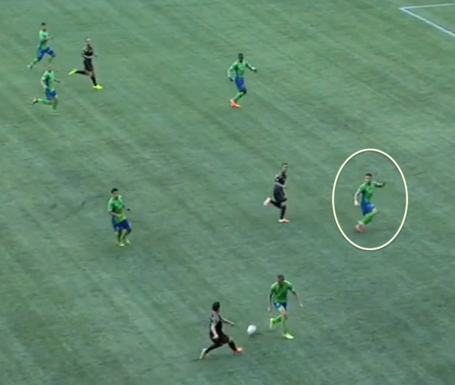 Where the breakdown starts to really happen is right here. Zach Scott appears to playing the wide pass, but Stefan Ishizaki cuts it in behind Dylan Remick. This puts Scott on his wrong foot, forcing Jalil Anibaba to make a decision about following Marcelo Sarvas or sticking with run of Landon Donovan. 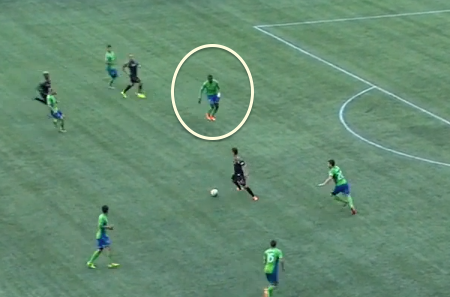 Anibaba doesn't really choose either, instead kind of hovering in the space, neither closing down the ball or staying with Donovan.

Failing to cut down the pass or properly track Donovan, the pass gets behind Anibaba. He's able to nearly recover, but not enough to keep Donovan from controlling the pass. Donovan sees that Gyasi Zardes has been allowed to run free as neither Scott nor DeAndre Yedlin follow the trailing runner. I circled Yedlin here just because I hate that he's standing there with his arm raised. Of the four defenders, all of whom could have done something to break this up, he might be the least at fault but he's the one people will be most annoyed with because of this.

Anyway, we know how it ends.

While the first goal was a classic example of how bad things can happen when a defense is on its heels, the second goal is just annoying because it's just a classic case of a defense falling apart. There's no great move or spectacular pass -- and make no mistake, Sarvas made a great pass to open up the first goal -- it's just players failing to do the stuff they work at everyday in training.

What crazy is that it all looks so tidy when this play really starts to break down. There are seven defenders plus the goalkeeper all in positions to have an effect. The Galaxy only have six players in the offensive zone. Once Marco Pappa gets into position, the Sounders should be looking good. 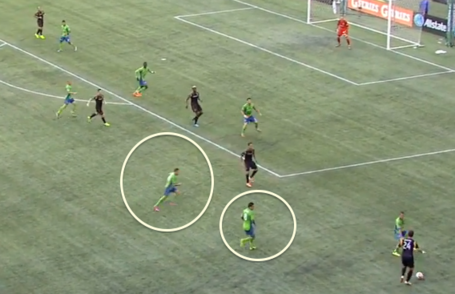 But Pappa doesn't really get into position, or at least he fails to communicate with Gonzalo Pineda as to where he's going. Pineda looks to be getting to double team the ball, a reasonable decision. Pappa's best bet is to go to Sarvas and stay there. 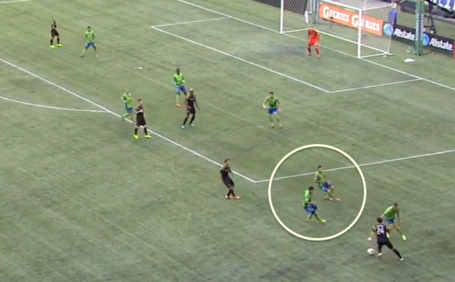 Instead, he flies past Sarvas, essentially mirroring Pineda's movements. Suddenly, the ball is triple-teamed and the Sounders are no longer in an advantageous numbers situation. 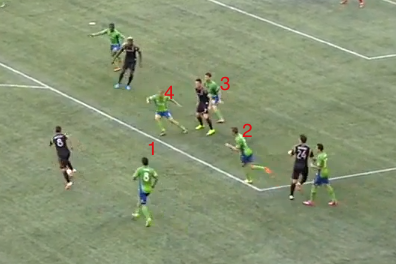 Ishizaki is able to beat the triple team and Sarvas is allowed to roam free at the top of the penalty area. There are four defenders near him, but no one is in a position to really make a play. 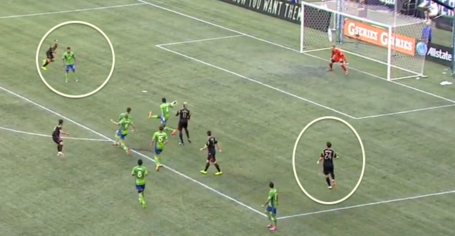 Still, Sarvas shooting from 20 yards out isn't the worst thing. What is problematic is that the Sounders are in horrible position to defend any rebound. If Stefan Frei does anything other than catch this shot or somehow manage to push it out of bounds, the Sounders are in serious trouble. Ishizaki is completely unmarked on the right and Yedlin is effectively ignoring Donovan coming in behind him. Papp, it should be noted, essentially has forgotten about Ishizaki, the man he was in so much of a hurry to triple-team a second earlier.

Donovan scores on the rebound, of course, and Yedlin will get the bulk of the blame here because it was on his side, but any number of players are guilty of bad defending on this.

The final goal starts with another bad giveaway. Pineda compounds his physical mistake with a mental one, spending a precious moment complaining about not getting a foul -- there doesn't appear to have been one -- that allows the Galaxy to break the other way. 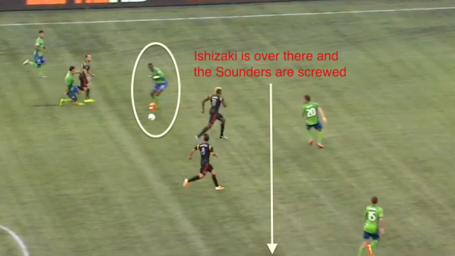 Anibaba is again guilty of slow decision making and being pulled way out of position. He doesn't really stop the ball and he doesn't get into a position to close out any passing lanes. Once Sarvas has it in the middle, the Sounders are in deep doo-doo. Scott is going to be forced to make a no-win decision, either following stepping to the ball or following Zardes and hoping Remick can get to to Sarvas. The only problem is that Ishizaki is completely unaccounted for either way. 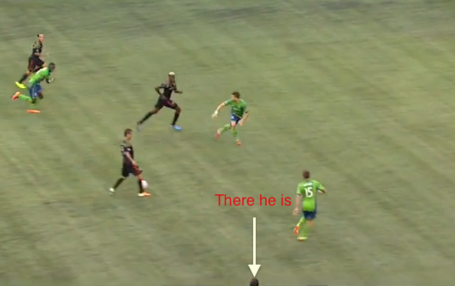 And here we see just how bad the situation is. Scott is attempting to split the difference on his defending, but it doesn't matter. Sarvas sees Ishizaki and he has a clean look on goal that he buries. Getting caught like this simply can't be allowed to happen, especially in the first half when there's plenty of time to get back into the match.

Not reflected here, but also problematic was the complete lack of linkage between the various units. The defenders had an awful time getting it to the midfield and the midfield could hardly find the forwards. The good news is that this was probably the first time we've seen that this year. For now, we can only hope it was an aberration.

Sounders v LA Galaxy - It's on Monday night, ya know