MLS Teams are making moves ahead of the transfer window. Besler has one foot in Europe. Mexico loves the letter "O." Suarez and Sanchez prepare to bathe in cash.

Share All sharing options for: Major Link Soccer: Klinsmann and Donovan speak up, the World Cup of arm folding

Has it been weeks since the USA v Belgium game?  Because it feels like it's been weeks.  The last two days I found myself flipping on the TV in the morning out of some sort of Pavlovian instinct, only to find the talking heads of Sportscenter or The View instead of tiny men running around on a green background.  It takes a while to shake off the dust and clear the head after stepping off the Kingda Ka-level rollercoaster ride of the US team's fortunes in Brazil.  But we have to be strong and stumble on, because there is plenty of action ahead, World Cup and otherwise.  Onto the links!

While the rest of the country bids goodbye to their USMNT favorites (for the most part), we in Soundersland are lucky, welcoming back our nation's captain AND its newly-famous speedy supersub and preparing to root for them in different colored shirts.

Buy shares of Dempsey and Yedlin now, because their stocks are on the rise.

How long Yedlin will be wearing rave green is an interesting question.  One report out of Belgium suggests that R.S.C Anderlecht are interested in signing Seattle's native son.  I mean, the standard huge caveats apply, but Yedlin does share an agent with former D.C. United phenom Andy Najar, who made the jump to Europe recently... where did he go again?  Oh yeah, Anderlecht.  Either way, the international attention won't be stopping there.

Whoever wants him is going to have to make it rain.

Back in May, the PASL (Professional Arena Soccer League) and the MISL (Major Indoor Soccer League) joined up, Captain Planet-style, to save the Earth form a new league for arena soccer, the Major Arena Soccer League.  The Tacoma Stars were already on board, but now Seattle will have a representative in the competition as Seattle Impact FC have announced they'll be joining the MASL in the upcoming 20-match season.  Home games will be played in Kent at the Showare Center, and open tryouts will start July 19th.

FC Dallas winger Fabian Castillo found out what happens when you sprint off the field to confront the assistant referee after the final whistle, "bumping" him in the process.  Four-match ban from the Disciplinary Committee.  No touch-y the officials.

Chicago Fire have given up on designated player Juan Luis Anangono and his four goals in 28 games, at least for now.  The Fire have agreed to a six-month loan of the striker to LDU Quito, a top-flight team in his native Ecuador.  Keep an eye on the Chi when the transfer window opens.  Hot Time in Old Town takes a musical angle in considering the best way forward for a struggling Chicago team who are officially the draw-iest team in MLS with 15 points through 15 games.

Sporting Kansas City face a "Post-World-Cup Transfer Crisis" of their own, because Matt Besler also gained plenty of attention for his rock-solid performances on the backline for the USA.  According to Sporting, there has been "enormous interest" in Besler from overseas (and also in his teammate Graham Zusi).  Besler's agent says to expect action on the center back in the next 10 days.  They're not exactly thrilled over at The Blue Testament, but also recognize it's pretty much now or never for the 27 year old to hop across the pond.

Is Real Salt Lake in a "tailspin?"  No, according to Matt Montgomery at RSL Soapbox.  They've had short strings of bad results before.  I'd go easy on the team if I were an RSL fan until Nick Rimando and Kyle Beckerman return, 'cause lets be honest -- those two have been known to keep them in games.

As D.C. United, how to score without Fabian Espindola?  My solution: kick the ball hard at Eddie Johnson's Grown Ass Head.  For a more nuanced take, here's Black and Red United's thoughts after their loss at home to our very own Sounders.

Red Bull New York spends a lot of money on players.  One place you don't want to see those expensive players is on the bench.  NY currently has about a third of the salary cap's worth of "talent" riding that pine right now, and Once a Metro takes a look at what to do about it.

Burgundy Wave gets some inside info about new signing Carlos Alvarez.  They have to hope his ceiling is worth more than was Nathan Sturgis' experience after the trade with the smoldering husk of Chivas USA.

The Montreal Impact have signed Ignacio Piatti as their newest designated player.  Piatti is a 29-year-old Argentinian offensive midfielder with Ligue 1 and Serie A experience.

Jurgen Klinsmann had plenty to say yesterday about what happened during the World Cup run and where the team goes from here.

Despite Klinsmann's pre-match smoke and mirrors, Jozy Altidore was not ready to return to the field against Belgium.  Altidore's injury and subsequent absence from the starting lineup is "definitely not an excuse, but definitely it had an impact."  No word on why there was no like-for-like backup on the bench for such an important player.

For his part, Altidore knew (from past experience) the moment his hamstring gave out that he would be out for at least a month.

Get ready to see a lot of young, unproven US players in upcoming friendlies.  To no one's surprise, Jurgy is already excited to see who is next for the first team:

"The experienced players, or the older players, we can tell them for the next couple of months, ‘Go play in your club environment, we know you inside out anyway, we know what you bring to the table. But right now maybe there’s time for the next couple of friendlies that come up and over the next year that we want to see the young players grow and see how they can make it.’"

Colorago Rapids fans can look forward to their RapKids possibly being a part of that future.

After all, apparently Klinsmann doesn't hate MLS after all?

Landon Donovan finally let it all out and engaged in some armchair quarterback, hindsight-20-20-type action yesterday, questioning Klinsmann's tactical choices at the World Cup.  He noted he would have been "disappointed" had Klinsmann walked into the locker room and announced the team would be coming out in a 4-5-1 with Dempsey playing up top.  I trust Donovan on this, as I see him as one of the top experts in "being disappointed."

On the other hand, DeAndre Yedlin sat down with Sports Illustrated and shared his vote of confidence for the US coach, among other comments: [Flash video]

Grant Wahl shares US Soccer President Sunil Gulati's thoughts on the World Cup, FIFA, Yedlin and just about everything else after Gulati had a formal chat with a small group of journalists in Rio.  (Before you ask -- no, he hasn't made any progress in his attempt to get FIFA Executive Committee members to reveal how much money they make from FIFA. Oh, you weren't going to ask and you're not surprised? Ok.)

Illegal ticket sales have been going on at the World Cup, netting somebody over $1 million for every match.  After an investigation that has gone on for months, Brazilian police are claiming that "someone at FIFA" was involved in providing the thousands of tickets that were changing hands off the books.

If you were as entertained as I was by the "turn to your left and cross your arms" routine acted out by every single player for their lineup portrait, you will appreciate this Slate article that asks the important question: Who won the World Cup of arm folding? The author provides many GIFs and does crown a winner, who is definitely not pictured below.

Seven German players are suffering from flu-like symptoms ahead of today's match with France.  No, Joachim Low won't tell you which ones.

In more serious news, an overpass collapsed in host city Belo Horizonte onto the highway below, killing at least one.  Lets hope this is this is the only such incident, considering the rushed nature of the pre-World Cup infrastructure building.

FIFA is considering allowing a fourth player substitution in future World Cups, but only when a match goes to extra time.

QZ.com has crunched the numbers on Facebook posts about soccer goals around the world, and here is a chart of how many extra "O"'s we add to our drunken, all-capped posts during matches: 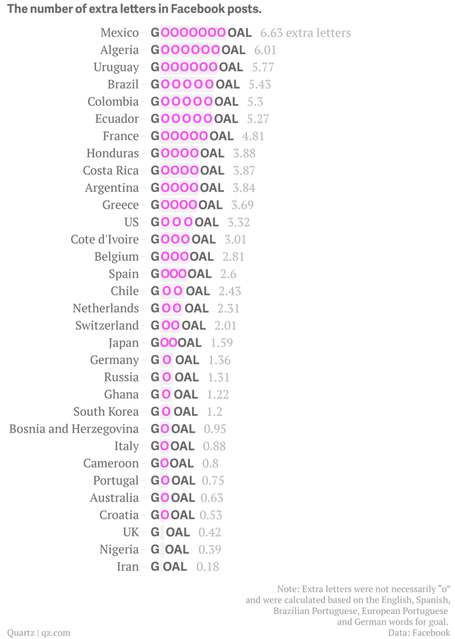 Luis Suárez will be allowed to have a medical examination for the purpose of a transfer, likely to Barcelona, despite his FIFA ban.  Any doctors involved in such an examination will be avoiding the phrase "open your mouth and say 'ahhh.'"  Sorry, couldn't help it.

Chelsea has confirmed their purchase of Spanish striker Diego Costa for a lot of money.

Arsenal has made a bid for Chilean star Alexis Sanchez, the man who I think would truly prefer to play in a Speedo if they would let him, given his propensity for pulling up his shorts to ridiculous levels at every stoppage.

If you really want to know all there is to know on the current Sanchez and Suarez transfer rumors/news (full disclosure: I really don't), luckily some Redditor has done the work for you with lots of links.

And who doesn't love clicking links?