CenturyLink's turf looked awful, here's what the Sounders had to say about it

Team says no more rubber was added to the field than is normal, but that a quick turnaround and warmer than normal temperatures contributed to the turf's appearance.

Share All sharing options for: CenturyLink's turf looked awful, here's what the Sounders had to say about it

As anyone with eyes could see, the CenturyLink Field playing surface looked like a bit like a garbage dump for Sunday's nationally televised match between the Seattle Sounders and Houston Dynamo. But as bad as it looked in person, it looked even worse on high-definition television screens across the country. 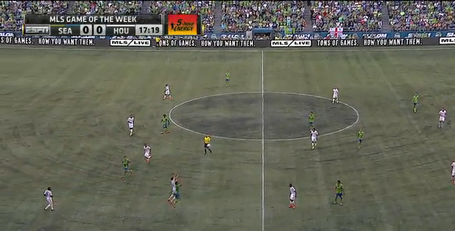 The visible blackness is, of course, the rubber pellets that are added to all FieldTurf fields. Usually, they are only visible when players kick them up, as they normally lie beneath the blades of plastic. The pellets are supposed to help make the field behave more like a natural surface.

The state of the turf was a significant talking point during the ESPN broadcast and at one point they apparently showed pellets being laid.

A team official insisted that the grounds crew didn't do anything out of the ordinary in preparing the field, including the amount of rubber pellets: "It's a multi-use stadium. There was a corporate event on Saturday. Field crew wanted to ensure field was in a safe and optimal playing condition. The quick turnaround plus very warm temperatures resulted in the rubber being overly visible. Extra rubber was not added to the field. We feel that the field was in very safe playing condition for the players."

That corporate event was apparently an Amazon company picnic, at least according to Reddit users and several Sounder at Heart commenters. Among the activities the field was used for was apparently some Quidditch matches.

The event that used the field a day prior to the Sounders-Houston match: Quidditch. pic.twitter.com/IX60FJCq5V

Although there's no timestamp on that photo, which was also shared on Reddit, it does appear to have been shot recently as the ads in the north end were recently changed. UPDATE: Turns out it wasn't Quidditch, but rather something called "broom ball," a game Amazon claims to have invented.

Whatever the cause, the players definitely noticed.

"The body feels better playing on that though, it's a little bit softer when they bring the rubber up.

Added defender Djimi Traore: "Straight from the warmup I didn't know what was going on. I hope they can do something for the next game. To be honest, I know [the Seahawks season] starts soon, and we know it will be very, very hard turf."

While the raw passing numbers don't paint a complete picture, it should be said both teams completed more than 80 percent of their passes. The Sounders basically matched their season average of 81 percent, while the Dynamo actually had one of their better passing games of the season.

Still, it's hard to get around that this was a bit of a black eye. On a night when more than 50,000 people were inside the stadium a few hundred thousand more were probably watching on TV, it's a real shame that so many people were fixated on the turf. But this has been part of a slowly growing narrative this year, which started when the decision was made not to replace the already two-year-old turf at the start of the season. The Sounders had dealt with similar issues in 2011, which was the third year of that FieldTurf.

While the use of FieldTurf may be an unavoidable reality as long as the Sounders are using a multi-use facility like CenturyLink -- and it should be said the pluses still dramatically outweigh the negatives -- keeping it in optimal playing condition has to be more of a priority than it seems to be now.