Seattle native will remain with the Sounders at least through the 2014 season.

Share All sharing options for: DeAndre Yedlin's transfer to Tottenham Hotspur is official

There was always a sense that the Seattle Sounders had DeAndre Yedlin on borrowed time. Just how limited that time is became a bit more clear today.

The long-rumored transfer of Yedlin is now official, with Tottenham Hotspur securing the Seattle native's signature as confirmed by both teams. The transfer is apparently worth about $4million (although Ives Galarcep is sticking by his $3.5 million figure), but it's unclear when the Seattle Sounders would have access to any allocation money windfall. Although MLS rules give the Sounders a 75 percent cut of Yedlin's transfer fee as a Homegrown Player, only $650,000 of that could be converted into allocation money.

"We are extremely proud of what DeAndre has accomplished in his young professional career," Sounders FC Owner and General Manager Adrian Hanauer said in a team release. "His success is a reflection of his individual ability as well as soccer development in Washington State and the continued commitment to progress the sport in this country. DeAndre is and always will be a special member of the Sounders FC family, and we are excited to have him in Seattle for the remainder of the season." 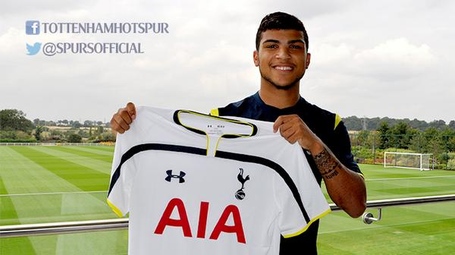 Potentially complicating the allocation math is that Yedlin will remain with the Sounders at least through the 2014 season and possibly beyond. Hanauer told reporters on Friday that the deal is not structured as a sell and loan back, but as more of a delayed transfer.

"I first want to thank everyone involved in my development," Yedlin said. "From my family to youth coaches to the Sounders, I am lucky to have such a strong support system. I'm excited to have the opportunity to play with Spurs in the English Premier League, and I look forward to helping the Sounders win a championship this season."

Tottenham's official release said Yedlin would join Spurs ahead of the 2015-16 season, which means he may stay with the Sounders until next June or possibly be loaned out to another club following this season. The reason for that delay may be the little matter of obtaining a work permit. Players who have appeared in 75 percent of their national team's competitive matches over the past two years are guaranteed to receive one, but if they fall short the club can file an appeal based on the player being an "extraordinary talent." Yedlin has only appeared in 3 of 20 competitive matches over the past two years. Even if he plays in all six Gold Cup matches next summer, Yedlin will still only have played in 9 of 14 (65 percent) competitive matches over the previous two years.

The Gold Cup is scheduled to start right around the time DeAndre Yedlin would join Tottenham in preseason, but he might need the CONCACAF tournament to bolster his work-permit case.

The road to White Hart Lane is also currently blocked by 24-year-old right back Kyle Walker, who many regard as a more polished version of Yedlin. Walker was England's starter through most of World Cup qualifying and was expected to the starter in the World Cup until an injury left him out.

Despite all of this, Tottenham apparently sees a good deal of promise in the 21-year-old and seem to believe he can continue his meteoric career trajectory.

It's sometimes easy to forget that Yedlin didn't really get onto the national radar until switching to the Sounders Academy from Crossfire during his senior year in high school. From there, he was able to snag a scholarship to Akron, where his move to right back was really cemented by then head coach Caleb Porter. After a couple solid seasons with the national title contenders, the Sounders signed him to a Homegrown Player contract.

Little was expected of the then 19-year-old, especially with Sweden international Adam Johansson blocking his path to playing time. But Yedlin impressed enough during his initial preseason that he made Johansson expendable and opened the season as a starter.

Yedlin went on to be named to the MLS All-Star team -- something no rookie had accomplished in seven years -- and even found himself starting for the United States in the U20 World Cup.

Around that time Yedlin's name started to come up in interviews with USMNT manager Jurgen Klinsmann, who mostly refused to talk about the youngster until he actually called him into the full national team.

That call came during the January 2014 training camp, when Yedlin was one of the more surprising additions. Yedlin made his senior team debut against South Korea, a mostly nondescript performance that gave little reason to believe he was anything other than an extreme long shot to make the World Cup roster.

Yedlin was eventually called into the pre-World Cup training camp, but of the 30 players he seemed the least likely to go to Brazil.

Yedlin didn't just earn a ticket to Brazil, he ended up being one of the United States' standout players. Still just 20, Yedlin made three appearances off the bench and injected new energy into the squad each time. Against Belgium, Yedlin ended up playing almost 90 minutes and even held his own against the likes of Eden Hazard.

While it's true that Yedlin has never quite fulfilled all his obvious potential with the Sounders, his tools are blatantly obvious. Not only does he have world-class speed and solid on-ball skills, but he's able to work the entire sideline and his work rate is unquestioned. Under the right tutelage, there's every reason to think that he can be a cornerstone of the USMNT and be a significant part of Tottenham's EPL fortunes.

And if it doesn't quite work out, the Sounders will surely welcome him home with open arms. In the meantime, enjoy him while he's here.

DeAndre Yedlin heading to Tottenham after 2014