The Seattle Sounders struggled against the high line again, while RSL's diamond midfield continued to be a dominant force. However, the Sounders ability to unlock their opposition in the second half gave plenty of hope as we approach their next clash in September.

Going into the Sounders 2-1 loss to RSL on Saturday, the main narrative was how  both sides  would fair with some of their most potent attacking threats missing (Obafemi Marrins and Marco Pappa for Seattle, Alvaro Saborio and Javier Morales for RSL). The answer was unfortunately a pretty mixed bag for Seattle Sounders fans, which sounds exactly like many clashes with RSL game over the past three years.

So much has been written about the RSL diamond 4-4-2, here and elsewhere on the Internet that I'm not even going to bother recapping how the system works. It's almost intuitive considering it hasn't changed for nearly half a decade. The players are still the same and the ideas are still identical. However, on Saturday they deployed a high line system as has become the recent tactical vogue when facing the Seattle Sounders.

As LA Galaxy showed, playing a high line and compressing space in the midfield greatly slows the Seattle attack, especially when one of Obafemi Martins or Clint Dempsey is missing. However, where LA was lethal against the Sounders because of their ability to generate quality midfield turnovers via the press, RSL showed almost no interest in high pressing the Sounders to generate any similar effect. Instead they were content to let their superior midfield numbers dictate control of the game.

Saturday was no different as the space shrank between the RSL centerback pairing of Borchers and Schuler and the compact 3-man holding midfield of Beckerman, Mulholland, and Grabavoy in defense. This restricted Dempsey's and Cooper's options making them ineffective outlets, not only for jump starting the offense but in relieving pressure in the opening half of the game. 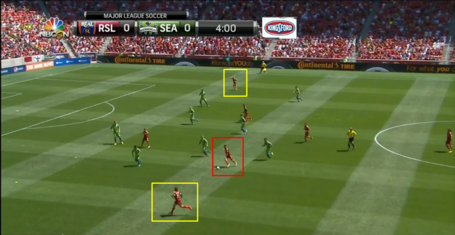 Another side effect of the RSL high line was a necessity to neuter Seattle's speed on the wings. It's always a part of RSL's gameplan considering the inherent weakness of the diamond 4-4-2 in wide positions, but against a Sounders side employing Lamar Neagle wide left and DeAndre Yedlin on the right it becomes even more critical. In possession, RSL pushed both Grabavoy and Mulholland extremely wide and far up the pitch functioning almost as wingers. Aided by an extremely aggressive Chris Wingert on the left, RSL was able to fully pin back Seattle in their own half for the opening exchanges of the game. Meanwhile on the opposite side of the pitch, Leo Gonzalez's rock steady game was enough to shut down Mulholland and Beltran.

However, as the half wore on the necessity of being overly aggressive on the wings against the Sounders wings ended up being the problem for RSL. With Gil swapping sides, combining with Plata and the carilleros, RSL were able to serve extremely dangerous balls into the box almost at will. However, without any secondary midfield runners (and few primary targets), this left the Sounders centerbacks and holding midfielders with ample time and space to win the ball. When they were able to effectively relieve pressure, which itself was rare for the Sounders in the first half, the Sounders enjoyed spells of toothless possession against RSL.

Andy Rose changed the complexion of the Sounders attack

Throughout the first half, Brad Evans had a particularly weak game. Considering he's still carrying enough injury concerns to warrant a preemptive removal, it's not surprising. However, Andy Rose' introduction immediately altered the complexion as DeAndre Yedlin suddenly had a fit partner who could also push the game against the aggressive Chris Wingert. With a suddenly more attacking right side of midfield, Beckerman and Schuler were not free to focus their attention on stopping both Clint Dempsey and Kenny Cooper. The introduction of Chad Barrett twenty minutes later added a secondary dimension to that attack, as he came into the game immediately pressing high to win the ball back from RSL and presenting himself as an utter nuisance to the RSL backline. Cooper shifting out to the the left for the departed Lamar Neagle gave Beltran fits as Cooper's technical ability with the ball at this feet turned Beltran inside out on more then one occasion, including the sequence leading up to the Sounders only goal of the match. Ultimately despite many quality attempts as the match wound down, the Sounders were never able to put more then two shots on targets. Multiple shots whistled just wide of the posts, or just over, but the Sounders were never able to find the elusive shot on goal.

Overall, while it was refreshing that the Sounders were able to effectively break down the RSL diamond midfield. That's something which they've really struggled with over the years, especially without two of their most potent attacking threats. However, their extremely weak performance in the first half continues to underline their recent tactical struggles in attack against compact defenses playing a high line. Unlike in their losses to RSL or It was just a matter of a single set piece where Joao Plata was able to work a few meters of space and a horrifying defensive turnover from Zach Scott that doomed Seattle to a loss at RSL's hands. With the imminent return of each sides powerhouse attacking talents (and RSL's new Argentine striker Sebastian Jaime), their third clash of the season in September at Centurylink Field is looking like it could have all the markings of a tactical masterclass from both coaches.