Now all they need to do is qualify.

After years of resisting calls to tie CONCACAF Champions League matches to their season-ticket packages, the Seattle Sounders have done just that. Assuming they actually qualify for next year's tournament, the Sounders will include both CCL group-stage matches in all season-tickets, the team told current account-holders on Tuesday.

The Sounders can qualify for the 2015-16 tournament by winning the U.S. Open Cup final on Sept. 16 at the Philadelphia Union's PPL Park. They could also qualify by finishing atop the Western Conference's regular-season standings or by winning MLS Cup. 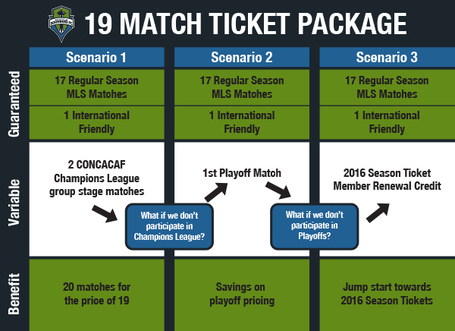 The Sounders are hoping to send a message to their fanbase with this new package.

"We've got a lot of work ahead of us but the best chance to win that is to have our fans engaged, behind us, enthusiastic, supporting us and making sure our home-field advantage is a true home-field advantage. That was part of the thinking on the 19th game and Champions League."

The Sounders have qualified for CCL three previous times and have never been able to match the crowds they normally see for regular-season matches. Their CCL crowds bottomed out in 2012 when they drew just a shade over 15,000 combined for their two group stage matches against Caledonia and Marathon.

Assuming the Sounders can match this year's season-ticket base (about 35,000), it's entirely possible that any one match in 2015 will outdraw the combined total of all three CCL matches in 2012 (about 23,000 attended the quarterfinal match against Santos Laguna earlier in the year).

"The whole technical side of the club has been and will continue to prioritize this tournament," Hanauer said. "We want to win it. It is a tournament that we believe in for long haul in this region. We want to get our fans more and more engaged in it. Perhaps you could say we're shoving it down their throats in a way, but that's what we're willing to do in order to make it a priority. It's really important to the technical staff and we want this place jamming and loud for those games."

Once the additional game(s) are added factored into the package, Hanauer said most fans will see a price increase of about 4 percent per game. The "blended" increase is supposed to average out around 9 percent for the entire package over 2014. To help offset this increase, the Sounders have also added a payment plan that allows season-ticket holders to spread payments over five installments.

"We worked with the Alliance Council closely, tried to make sure that we weren't doing anything egregious," Hanauer said. "Our objective is to keep ticket pricing as low and affordable as possible, while giving our club as much ability to win championships as possible."