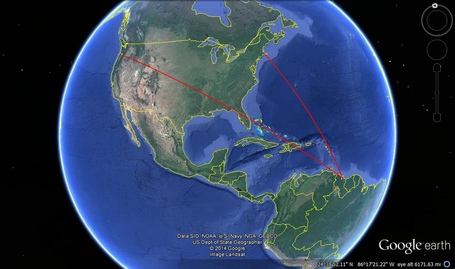 From a Sounders perspective you will want to cheer for the Rapids.  The Galaxy are seven points behind the Sounders but they have a game in hand.  Anytime the Galaxy, RSL and now Dallas drop points is a good thing.  Other than that it depends on your attitude towards cheering other MLS teams on in CCL.

I had to stretch to find National TV Listings for this post.  Fox Soccer Plus is not exactly a channel that a lot of people have.  Univision Deportes is probably going to end up being your best bet if you want to follow CCL.  Most games are also available to stream on Fox Soccer 2 Go.   Not to shill for Fox Soccer, but the Fox Soccer 2 Go app currently has a 7 day free trial if you are so inclined.