The Sounders are on a trend of increasing narrowness.

Share All sharing options for: Lack of attacking width is becoming a serious problem for the Sounders

Last night at halftime, Sigi Schmid noted that there were issues in the Sounders play and that they were increasingly becoming too narrow. Specifically he noted that he needed Jalil Anibaba to overlap on the outside to provide that width. 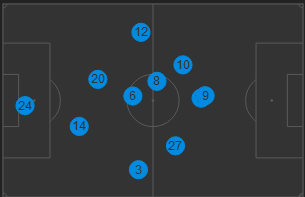 But more than in just last night's game, the Sounders are doing something incredibly worrisome. Their width is disappearing. Look at the three heat maps to the right. The first is the 4-0 annihilation of RSL earlier in the season. There's a caveot to choosing this game considering RSL were without some of their best players, but even so you see a Sounders side playing with width. The fact that the Sounders use inverted wingers is always going to compress average position maps, so take some of this with a grain of salt, but moving forward in time we've seen them compress directly into the center of the field. 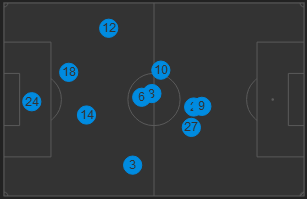 The 2-0 win over Houston shows the evolution of this issue. It was a game in which the Sounders had trouble breaking through the center of a compact high line for much of a very frustrating first half. Inverted wingers causing a pinching in of the average position map and a more narrow approach that, while ultimately successful, was also fraught with uncertainty. While the game itself was unremarkable compared to those preceding it in this regard, it serves as benchmark in the trend that the Sounders attack has followed. Their 3-0 drubbing at the hands of the LA Galaxy? Same story. The games in which the Sounders have struggled the most have been those where they have played the narrowest. 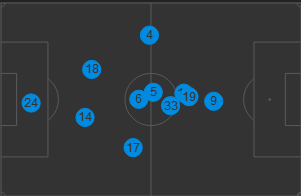 However, last night's 1-1 draw was perhaps the culmination, as their average position map resembles a bean pole (or a battering ram considering their 24 shots on goal). The Sounders outshot San Jose 24 to 10, but the blocked shots statistics says everything you need to know about the game. On the evening San Jose blocked 12 shots, exactly 50% of all total attempts by the Sounders. While that's not an uncommon occurrence, the sheer volume of attempts tells us that the Sounders spent most of last evening firing shots on goal through traffic. That's not a recipe for long term success, especially when coupled that with the fact that 14 of the Sounders 24 shots came from outside the box.

In some ways, it's not hard to really identify the biggest reasons why this is happening. A big part of it is how Marco Pappa was asked to operate for almost two months in the absence of Clint Dempsey. He was asked to play a free role swinging underneath the strikers and was given license to creatively dictate the game on both sides of the pitch. On the opposite side, Lamar Neagle was asked to play higher cutting in alongside the strikers giving Obafemi Martins creative license. With two free floating highly creative players drifting through the middle, the Sounders were tactically flexible and a dangerous team. They had trouble against sides like DC who were strong though the middle, but they didn't appear anemic. With Clint Dempsey back in the fold, those tactical abilities become fantastic weapons for the Sounders, but it also has the potential to cause very serious issues for the Sounders if they're not addressed. With two players diving into Clint Dempsey's area, along with Clint Dempsey himself, the Sounders are narrow and easy to defend as the spell of recent results has born out. Toss in an exhausted Clint Dempsey who's not interchanging and moving well and you start to get games like last night against some dramatically inferior competition.

As the Sounders showed last night in brief flashes when they bring width to the attack, not just from the fullbacks but from the wide midfielders, they can bring serious pressure and quality chances raining down on oppositions. However, by no means should every attack be strictly wide though too. Attacking the middle with numbers when an opposition central midfielder is caught up the pitch is a fantastic way to break through a defense and the Sounders should retain that ability. The Sounders are out of balance in the attacking phase right now. The only question is can they work to find tht balance again before they start dropping points when there's no more wiggle room in the games played category?

Sounders v San Jose Earthquakes - Getting back on track