This is it. Everything the Reign have built this season has been towards hosting the playoffs, and tonight they host their first playoff match against the Washington Spirit.

The next step has arrived in Seattle's emphatic turnaround from first season disappointment to one of the best seasons in US pro women's soccer history. Their first ever playoff run begins tonight as they host the Washington Spirit at Memorial Stadium.

The Reign's regular season against the Spirit was good, of course — they had a winning record against every team in the league other than Chicago (who were particularly adept at grinding out results but mercifully failed to make the playoffs). In their first match in April Seattle got off on the right foot with the Kendall Fletcher backflip goal off a set piece and went on to win 3-1 at home. Then in May on the road Seattle came back from a goal down to win 2-1 thanks to Sydney Leroux's first goal of the season. In their last regular season matchup, Seattle had already clinched the shield and was resting players for the playoffs, but came back from a deficit to draw 1-1 after bringing Kim Little into the match late.

But despite that run of good results, the Spirit are dangerous. Their offense is led by Englishwoman Jodie Taylor, whom the Reign traded the rights for to Washington in the offseason as part of the deal that got Nikki Marshall, who was then traded to Portland for draft picks that. . . look, the Reign offseason was very complicated. Anyway, they got her rights from Laura Harvey and she's rewarded them with 11 goals, tied for 3rd in the league. She has been bolstered at forward by the addition of tempestuous Australian Lisa De Vanna, but word on the stret is De Vanna has not traveled with the club and won't be joining them at all in the postseason, which is both surprising and not entirely shocking. Taylor is also just returning from the same England-versus-Wales World Cup qualifier that Jess Fishlock played in on Thursday. So the wear and tear of that travel should balance out for both teams.

Stepping back from the forward(s), Washington's real strength is in midfield. Canadian Diana Matheson and last season's Reign rookie of the year Christine Nairn (who was traded for the rights to Kim Little) team up to create dangerous deep runs out of midfield. And behind them is Ali Krieger, still one of the best fullbacks in the league at both ends of the field.

So the Spirit absolutely have the talent to pull off an upset, but the way Seattle has been playing this season and with the Reign as healthy as they've been all season, it would taken an off game from Laura Harvey's group at home, which seems unlikely. And if they hold form and get through, it's off to host the NWSL Cup final at Starfire against FC Kansas City next weekend. 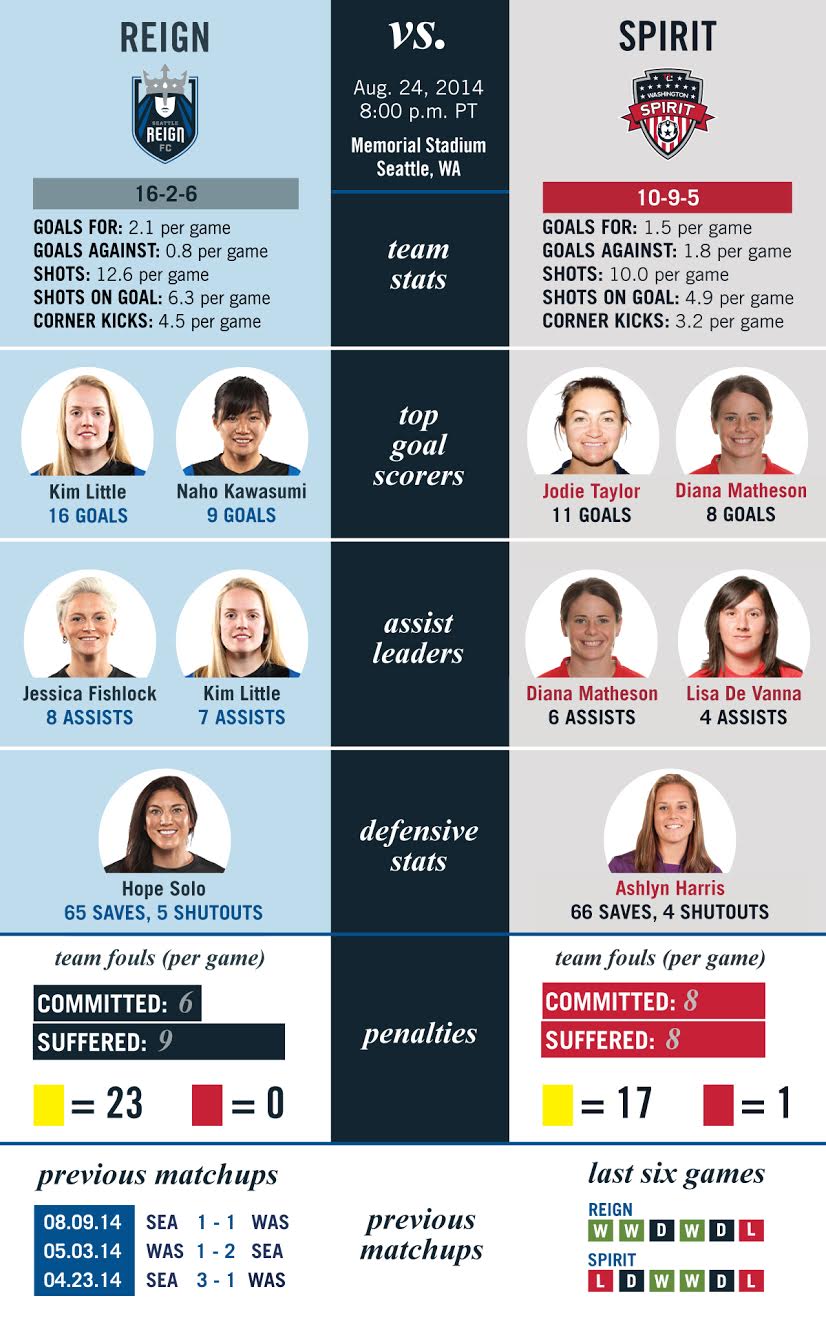