Hope: A Memoir of Trophies Denied

The 33-year-old Hope Solo has built her game and her career from the dry fields of Richland, Washington through the false starts of American pro women's soccer to the peak of the international stage. But through it all, one thing she's never done is win a championship with her club.

Share All sharing options for: Hope: A Memoir of Trophies Denied

I would be the first to admit that I'm biased. I'm an American and a Seattleite and a Husky (and beyond that I grew up in the Columbia Basin and my parents separated when I was young, so I share biography). That said, and with all due respect to Hedvig Lindahl and Nadine Angerer and Brianna Scurry, I think Hope Solo is the greatest female goalkeeper to have ever played. And it's a small tragedy that she has yet to win a club championship.

That's not to say that her trophy shelf is bare. She has won consecutive Olympic gold medals with the United States. And in the women's game the Olympics include the full senior squad and are second in prestige only to the World Cup. But that missing Cup looms large. The USWNT has lived in the shadow of the "99ers" for 15 years and will continue to do so until they win a World Cup again. So even on the team with which Solo has won titles, there is pressure for more.

The last time Solo won a title with anyone other than her national team was in high school, when she led the Richland Bombers to a Washington state title in her senior year to culminate a 109-goal-scoring career as a forward. She transitioned to goalkeeper with the Washington Huskies and became the best keeper in the program's history and one of the best in the college game. She was the first keeper to ever win Pac-10 Player of the Year and in her senior year was the only keeper on the Hermann Trophy watchlist.

But the Huskies only made the NCAA tournament twice during the Solo era, and both times were knocked out of the tournament by the Portland Pilots before ever coming close enough to glimpse the national title. And then she moved on to the pro game. 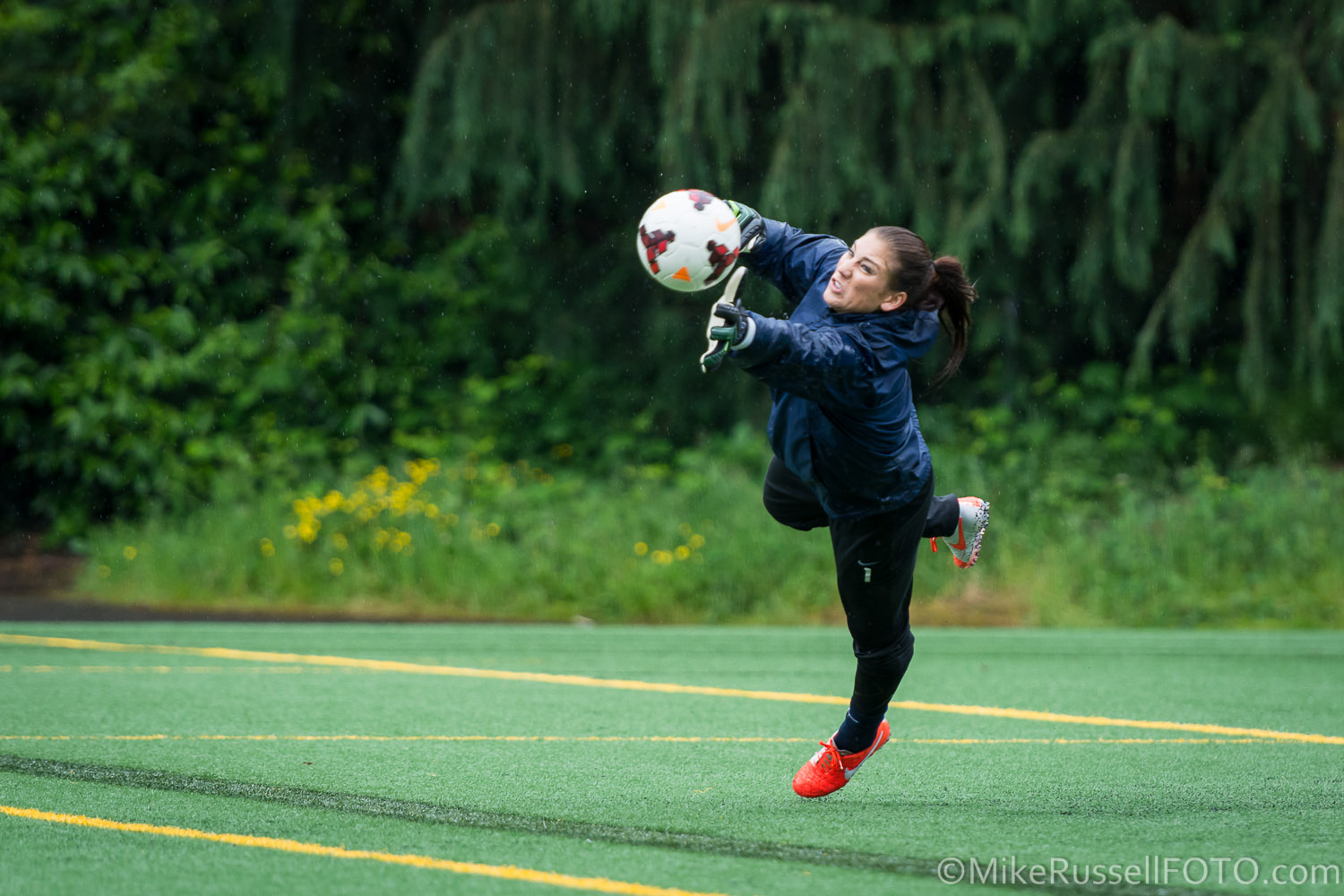 The story of Solo's club career is the story of the fragile, unstable world of women's soccer in the US — where it is played on football fields and college campuses far away from the media glare of the World Cup and the Olympics. It's a testament to that instability that Hope's nascent two-year stay with the Seattle Reign is the longest she's ever been with a single club. Some of that is in the nature of the pro game in the US. A lot of it is just bad luck.

After graduating, she was drafted in the first round by the Philadelphia Charge of the Women's United Soccer Association and spent most of the season as a backup or injured. The Charge finished that 2003 season 8th out of 8 teams. A few weeks later the league folded.

With no pro soccer in the US, Solo joined the diaspora of Americans who left to find jobs in Europe in 2004. She first joined Swedish side Göteborg, then French side Lyon for half a season. Göteborg finished in 4th place. Lyon finished 3rd the year she played for them and the next. Then they won the league and haven't stopped winning since, having now won the title eight consecutive times. But that was all after Solo's time in France. She left club soccer in 2005 to focus on the national team ahead of the 2007 World Cup.

She stayed without a club until women's pro soccer briefly returned to the US in 2009 in the form of WPS — the bluntly named Women's Professional Soccer. She was allocated to St. Louis Athletica for the inaugural season. Half a continent away in her hometown, the Seattle Sounders were hamming it up in their new digs in MLS. St Louis had a pretty good season, too. Solo finished 2nd in the league with seven shutouts and Athletica finished second behind Los Angeles. Then in the semifinal they were upset 1-0 by Sky Blue FC to end the season. 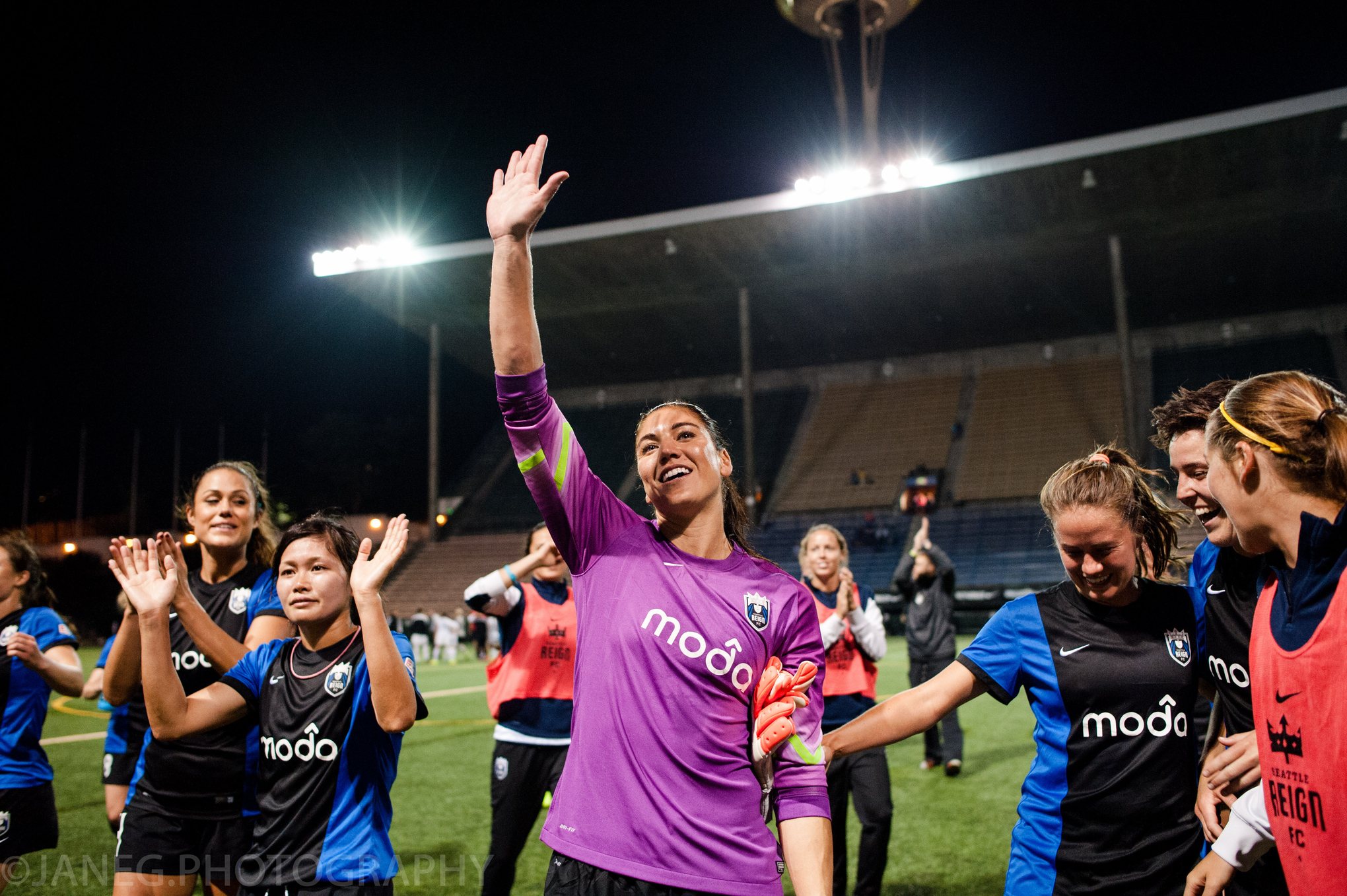 Now it's 2010. For the first time in her club career, Solo was returning to the same team after an offseason. The team deservedly expected to compete for a trophy in Year 2. Then in May — six games into the young season — owner Jeff Cooper announced that the team was folding. The Athletica players became free agents and a few days later Solo signed with the expansion Atlanta Beat. They won five games all season and finished in last place. Then for the 2011 season she signed with Dan Borislow's now-infamous magicJack.

If Athletica's midseason collapse was the second-biggest disaster in the history of the women's pro game in the US, the 2011 magicJack season was the first-biggest — and Solo had a front row seat to both. She missed most of that season recovering from shoulder surgery and then playing in the 2011 World Cup, and ended up only playing 360 minutes for the team. They finished in 3rd place out of 6 and then lost 2-0 in the semifinal to Philadelphia — a match for which Solo was out injured. But the on-field results are almost a side-story compared to what went on with the team off the field. I'll not regale you with the entire Borislow saga here. If you really want to explore it, maybe start here. Suffice it to say that by the end, the lawyers were making more money than the players, the team was kicked out of the league, magicJack threatened to keep its players and become some kind of touring soccer Globetrotters, and finally — maybe mercifully — the league folded. Soccer winter had come again.

Now the 2012 World Cup was impending and there was no pro league. Rather than spread out over Europe, many of them chose to play together (for no salary) for a little W-League team in the rainy northwest called the Seattle Sounders Women. There was Solo and Alex Morgan — who had a romantic interest on the Sounders — and Sydney Leroux from BC and Stephanie Cox who lived here anyway and Megan Rapinoe and Keelin Winters who graduated in nearby Portland. This might sound like a Lebron-to-Miami Heat situation. More than that, it sounds like a "bring 6 international quality ringers into my amateur league and coast to a title" situation. But the reality was more complicated. The team was a sensation at the gate, but thanks to national team camps and friendlies those star players only played a handful of games with the Sounders. In the end they succumbed to the Western Conference titans Pali Blues (who literally play in a building named Titan Stadium). The season ended with a 1-0 playoff loss that didn't include Solo or any of the national teamers other than Cox. Still, even though she hadn't played it would have counted. A W-League title was something.

In 2013 a new acronym arrived: NWSL. Like Sisyphus, we were going to try again. Solo was — probably flying in the face of all reason — willing to try pro soccer in the US again, and was allocated to her hometown Seattle Reign. You know how this goes. They earned two points in their first 11 games -- all without Solo -- finished 7th of 8 teams, and everyone was disappointed.

That is the painful, meandering trail of history that led across two continents, over the rubble of two failed leagues, and into the lights of Memorial Stadium for Sunday night's NWSL Semifinal match. Specifically it is the 78th minute and the referee has just reminded everyone that this is an NWSL game by calling the second handball penalty of the match.

The team has already won a trophy — the NWSL Shield. It's the first club hardware Solo's won since she was 17 years old and playing forward in high school. But she will want more. The real title is on the line — a real championship. And in the late minutes of a taut game the referee has awarded a penalty that would put the Spirit up and likely end the Reign's season.

Being Hope Solo, Hope Solo saved Diana Matheson's kick. Then she gave us this: 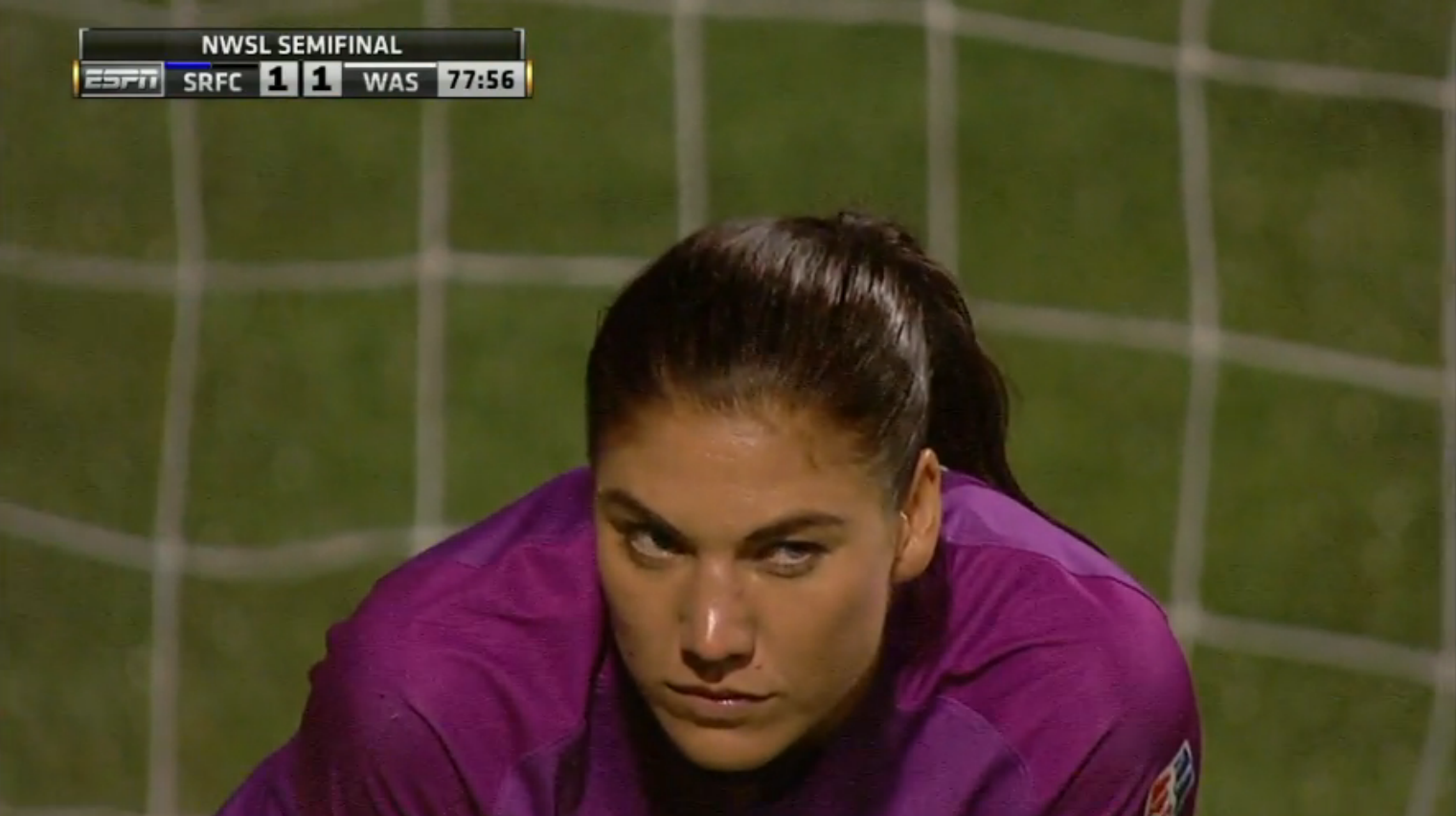 It is important to note here that this is Solo's expression after she saved that penalty. It is a moment when a keeper's typical reaction is to celebrate or — if she's feeling particularly intimidating — maybe bust out a fist pump and a barbaric yawp. That's what you'd have seen from Angerer or Karina LeBlanc or Ashlyn Harris across the field. Hope's reaction was cold fury.

The proximate target of that hell-stare might have been the ref. Or maybe Matheson. I'd check the tape but I don't think it matters. Because I suspect the ultimate target was life. Real life and soccer life had once again teamed up to try to fuck with Hope Solo and she was having none of it.

That is the context of this weekend championship match at Starfire. Some of it anyway. That game is the culmination of a lot of stories and a lot of contexts. But among those other things it is Solo's chance to — for the first time in her professional life — end her season with a win. To go into the locker room with her teammates in her home town and throw around champagne or Fanta or whatever and relax, instead of brooding over what they could have done differently and thinking about next year — a next year that she knows as well as anyone may never come.