Bill Belichick doesn't know who Jermaine Jones is. Kamara is a free agent. Jordan Morris is so hot right now.

Share All sharing options for: Major Link Soccer: Who is Jordan Morris?

Who is Jordan Morris? Oh he's just one of the several highly talented individuals collectively known as The Future who has made his way onto the national radar (specifically, Jurgen Klinsmann's radar).  In fact he's the first collegiate player to be called up to the senior USMNT since Ante Razov in 1995.  In case you missed it.  That's pretty great.  I mean not to get too crazy about it, but depending on who you ask, he might be the second-best player in the college game right now. 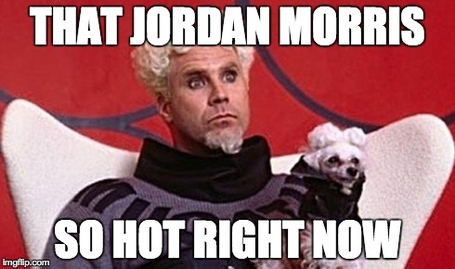 Is Bill Belichick coach Lasso?  It's entirely possible.  The coach of the team that shares a stadium with the New England Revolution has never heard of Jermaine Jones, but that's because he doesn't even know the rules of soccer, nor does he worry about anything but winning football games.  Uh, you know, real football that is.  To be clear, I'm not surprised at his answer given his job and I think the fact that a reporter even asked him about the JJ signing is hilarious.

Danny Mwanga is out on loan to the NASL's New York Cosmos, but the Colorado Rapids can recall him any time before the MLS roster freeze.  Presumably he will see more action in the next few games in the lower league than he would have against MLS opponents the Sounders tomorrow.

MLS disciplinary committee has retroactively suspended Norberto Paparatto for one match after his dangerous elbow to the head of Chad Marshall in the collision between the two players last week.

Former Sporting Kansas City star Kei Kamara is a free agent after he and Middlesbrough FC mutually agreed to cancel his contract.  Will he return to MLS?  One assumes he would go through allocation if that were to happen, but one just never knows, does one?

"It’s a situation of professional soccer in this country that we don’t have promotion/relegation. Teams have to sort of buy their way in to whatever level they want to be at," he said. "We don’t look at ourselves or consider ourselves as second-division. We look at ourselves as a professional league that’s in its fourth season and is doing quite well on the field and off the field. We focus on continuing to grow that league."

Oh, so the Champion's league draw happened.  Will Fredy Montero be a champion of the champions?  You never know.  Here's the Guardian's story.

Whatever happened to all those former stars in their late thirties who we all thought had retired or signed up to big vanity contracts?  They all signed up to big vanity contracts in India, where rich folks are putting some real money into drawing interest in a domestic league.  I'll give you exactly one guess as to which former Sounder is on that list of ancient players...