Friday night's match against RSL could give Seattle more breathing room in the Shield race, or it could make things even more complex. The 7:30 PM match is on NBC Sports net and is at basically the same time as the Mariners game. Avoid traffic by taking mass transit, that or get to SoDo very early.

Did you know that Real Salt Lake has never faced a Seattle Sounders offense when both Obafemi Martins and Clint Dempsey started? Friday at 7:30 PM they'll have the first opportunity to see the most potent heads of the hydra. Sigi's men also haven't faced RSL's emerging version of the hydra. It could be an offensive explosion, except that both defenses are also pretty good.

It's really no surprise that these two sides meet on national TV. They are the two best teams since 2009 not named LA. They play attractive soccer with stars on both sides. Let's check in with Randall at RSL Soapbox and ask a few questions about his Cobalt & Crimson.

SaH: RSL's attack just rapidly redeveloped. Who starts/sits and what do they bring?

RSLSB: It is a difficult task to guess who will start this match as Alvaro Saborio is just returning from injury and might not be ready for the full 90 minutes. Joao Plata is returning from national duty with Ecuador so he might be fatigued. Sebastian Jaime just arrived in the United States a couple weeks ago and had twins on September 10th so he might not be available, and if he is I'm sure he will be sleep deprived. As for Robbie Findley and Omes Garcia, they should be ready if called upon. So needless to said there are a lot of moving pieces.

I would agree with owner Dell Loy Hansen when he recently stated that he has never been as pleased with the forward corps at RSL as he is right now. There is a lot of talent deserving of minutes. Saborio is the number one option if he is ready as he is a proven scorer in MLS and consistently scores 10 to 15 goals a season. Plata has been on fire in 2014 so he would be the likely second option. He is quick, creative, and deceptive with the ball. Jaime, the little that I've seen from him, looks like he can score a variety of ways so he should be dangerous. Findley and Garcia are both very gifted athletically. If I had a gun to my head, I think Saborio and Plata start this match.

SaH: If you were designing the offense to go against Salt Lake what would your primary path to goal be?

RSLSB: It would not be through Chris Schuler, that is for sure. When he is on the field, Real Salt Lake loses at a much lower rate than when he is on the field. He is arguably the most underrated defender in the league. He is very gifted and actually was going to be called up to the U.S. Men's National Team camp earlier in the year if not for a much needed surgery. I kind of like that is a well-kept secret, however.

If Seattle, or any team for that matter, can get set piece opportunities, that is where RSL is the most vulnerable. For some reason, a lot of goals scored by RSL opponents happen on corner kicks or free kicks. Beyond that, speed on the counterattack is another area where Salt Lake is weaker than I would like them to be. They got exposed by Dallas a couple weeks ago with their bunker then attack-as-quickly-as-possible strategy.

Really though, probably one. 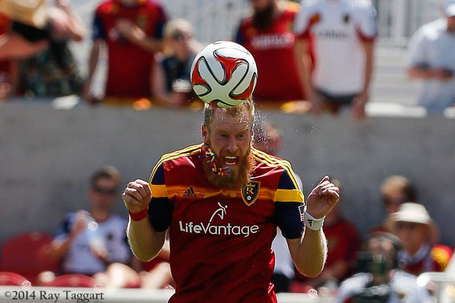 He's that tiny and the beard is that big.
Original Photos via Real Salt Lake/Ray Taggart and Kevin Kuo/USA Today Sports - shopped by Likkit, because mine was horrid.

RSLSB: Is Clint Dempsey living up to expectations and is he worth his salary?

SaH: Living up to expectations is hard to do when Sounders fans are to the point where the only thing that will satisfy a large swath of the fanbase is MLS Cup. Clint needs to be the man to lead to that for that broad element. His individual quick-look numbers don't seem to be good enough. He only has 11 goals, only good for a tie with three other players (Plata is one), but like most players in that group he hasn't played as much as the league leaders.

Dempsey still changes games though. He attracts double-teams that most in MLS do not need, and he has the vision to pass out of them. Yes, Clint and Martins play within a few yards of each other quite a bit. When they do this suddenly one will burst through and be in on goal. If Dempsey didn't have another top talent alongside him he may not be worth the money, but together they are exponentially better than they are alone.

Off the field his marketing power is clear. He is in national TV ads and the cover man for FIFA 15. On the XBox versions of the game he's even in the Rave Green of the Sounders.

RSLSB: Are the Sounders going to have one eye on the Open Cup final when we look at the roster on Friday?

SaH: Nope. Sigi Schmid always tries to win the next game rather than one down the road. The number of times with Seattle that he's benched a non-injured player to save them for a future game can be counted on a single hand. He just had the opportunity to rest Dempsey against Chivas USA. He did not. Sigi's goal Friday night will be simple - extend the lead over RSL. Saturday morning he'll wake up and focus on Philly and earning a fourth Open Cup trophy in six years.

RSLSB: Is there an area or two that you think RSL has the upper hand in this match?

SaH: Salt Lake clearly has the better keeper. Rimando can take over a game in such a way that it doesn't matter how good the rest of his team is doing. Seattle could dominate every aspect of the game and still manage a zero-zero draw, just because of Nick Rimando. That sucks to think about, but it is the reality of Salt Lake.