Sounders have clinched a playoff spot

There's no scenario in which five Western Conference teams can pass the Sounders in the standings.

Share All sharing options for: Sounders have clinched a playoff spot

UPDATE: Shortly after publishing this story, the league website now reflects that the Sounders have clinched.

A few different Sounder at Heart readers had pointed out that the Seattle Sounders' win over Real Salt Lake had effectively clinched a playoff spot. They made a pretty compelling case. But I felt compelled to really talk it through and make sure it's right, since the league office hasn't made any official announcement.

Here are the standings as they look today: 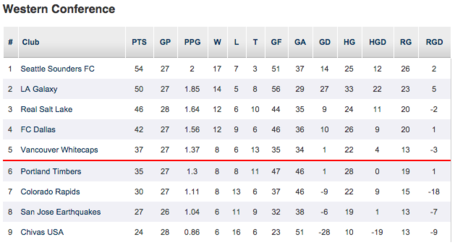 The Sounders have 54 points. In order to miss the playoffs, they would need to be passed by five teams. The Rapids and the two teams below them in the standings can not get anymore than 51 points, so for these purposes the only thing we need to worry about are the top 6 teams in the conference.

The Whitecaps can theoretically get to 58 points, the Timbers to 56 and Dallas can still get as high as 63. So, simple, right? The Sounders have not clinched.

But the reality is that all three of those teams play each other and thus aren't all capable of maximizing their point total.

So let's look at their schedules and see where they might drop points by simply playing one another.

Dallas: vs. Vancouver, at LA Galaxy, vs. Sounders, at Vancouver, vs. Galaxy, at Colorado, vs. Portland.

Vancouver: at Dallas, at Portland, vs. Real Salt Lake, vs. Dallas, at Seattle, at San Jose, vs. Colorado.

Since all three teams would need to pass the Sounders, let's assume these teams manage to win all of their games that aren't against one another.

But the Whitecaps would also need to win at least two of their remaining games. So they could beat Dallas once and tie another to get them to 53, but they'd also need to beat Portland to get to 56 since they won't win a tiebreaker on 54, which would leave the Timbers with just 53 points.

So, it would, in fact, appear as though there's no scenario in which all three teams can pass the Sounders' 54 points. Yes, the Sounders have effectively clinched a playoff spot.