Goal breakdown: Re-living the goal that gave the Sounders their fourth US Open Cup

The deft movements of Obafemi Marints and Clint Dempsey, combined with one mistake from Philadelphia, gave the Seattle Sounders their fourth US Open Cup.

Share All sharing options for: Goal breakdown: Re-living the goal that gave the Sounders their fourth US Open Cup

In the 101st year of the US Open Cup, it was fitting that the winning goal came in the 101st minute. After 100 minutes of back-and-forth and to-and-fro in a highly entertaining duel, the Seattle Sounders finally found the goal that earned them their fourth US Open Cup. That the goal also came from Clint Dempsey and earned him his first club silverware as a professional player made it all the sweeter. 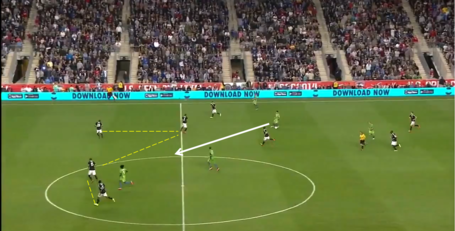 The play starts with a clearance following a Philadelphia Union attack that Lamar Neagle neatly controls on the right before dishing to Gonzalo Pineda in the center of the park. From this position Philadelphia are in theory sitting pretty with 4 defenders back and their two midfielders between the ball and the defensive line. The ball is in front of the majority of their team and Seattle only has two attacking players. As Pineda controls the ball the Philadelphia defense is shifting to protect against the wide option in Lamar Neagle while Carlos Valdes stays high to pressure the oncoming Pineda. While Neagle does not have the speed of say DeAndre Yedlin, with both Dempsey and Martins in the center any move that dragged away the fullback and resulted in a cross was going to be extremely dangerous for Philadelphia.

Despite addressing that weakness, Seattle has the advantage in the center as well as Philadelphia are currently set up with their two fullbacks and a lone center back in the middle of the park. With Nogeuria just coming into play and Edu still far behind the ball, there is very little effective defense between the developing midfield line and a weakened defensive line. 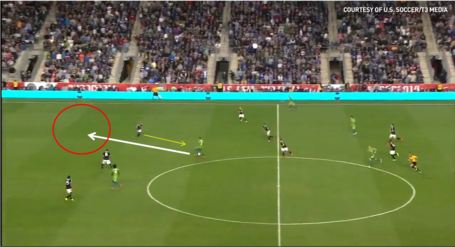 Recognizing the window is closing, Pineda threads a brilliant pass through the Philadelphia defenders hitting Clint Dempsey in stride. From here out, it's all down to the brilliant runs of Martins and Dempsey as the Sounders move toward the Philadelphia goal.

Rather then compacting and cutting off the throughball, Raymon Gaddis decides to move laterally to pressure Dempsey on the ball. While choosing this course of action isn't wrong considering leaving Clint Dempsey alone in midfield with acres of space might qualify as ritual suicide, it does end up being a major component of Philadelphia giving up the goal. This action by Gaddis opens a massive hole for Obafemi Martins to run into which Dempsey hits perfectly. 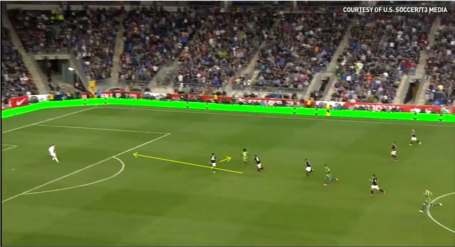 With Martins skipping on past the only remaining Philadelphia center back, it's all on Sheanon Williams to stop Martins or he's waltzing in on goal. As the right back Williams slides left while center back Ethan White heads back into the center. However with the on-ball skill of Martins the choice is either a) mark far post or b) drop in close to aid Williams so Martins doesn't beat him 1v1.

White chooses the later option which, while a) not wrong b) helps to define the play. Recognizing the space allowed by White on the far post, Dempsey adjust his run towards it. 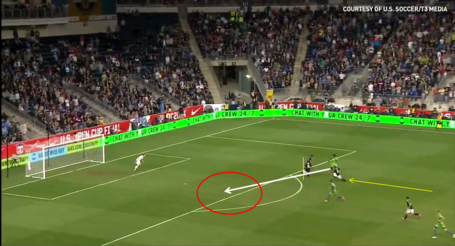 In intervening seconds, here's where Raymon Gaddis makes the crucial mistake on this play. Rather then recognizing his defensive partners have his back he turns off pressuring Dempsey and sprints directly for Martins rather then tracking Captain America. Martins deftly checks his run as Williams steps, and as Gaddis commits, he hits Dempsey going far post. Already at full sprint, and to his credit trying to atone for his error, Gaddis nearly catches Dempsey. However with the speed of the Seattle counterattack and MacMath far off his line, the choice by Gaddis to leave Dempsey leaves the Philadelphia goalkeeper positionally compromised. Protecting his far post leaves too much room on the near post and he's stuck in the middle.