FIFA 15 will be available in stores on Tuesday, but EA has been release various ranking lists in the run-up. One of the latest is the Top 20 players in MLS and the Seattle Sounders are as well represented as anyone else.

Topping the Top 20 list is Clint Dempsey, who was given a rating of 81. That's one point better than Toronto FC duo Michael Bradley and Jermain Defoe. Dempsey rates strongly almost across the board, with shooting (80) and dribbling (82), being his standout metrics. 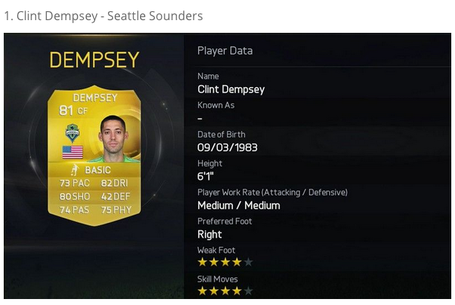 Joining Dempsey in the Top 20 are Sounders teammates Osvaldo Alonso and Obafemi Martins. Alonso comes in at No. 12 with a rating of 76, putting him on par with the likes of Diego Valeri, Pedro Morales, Ignacio Piatti and Federico Higuain. Alonso is one of just three primarily defensive players to make the MLS Top 20 and is the highest rated of those three. EA gives Alonso strong marks in pace (82) and physicality (80). 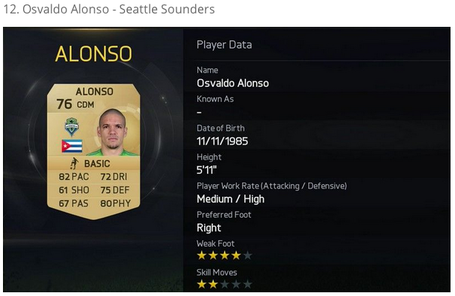 Martins does just a little better, coming in at No. 7 with a rating of 76 (yes, that's confusing, but I don't have an answer). Martins get a huge boost from his pace score (93), which actually puts him among the Top 20 fastest players in the game. His "weak" foot also gets a five-star rating. 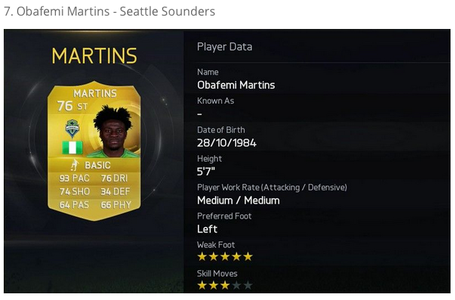