Plenty of blame to go around on FC Dallas winner

The Sounders were in great position to at least get a point until several defensive breakdowns allowed FC Dallas to grab the game winner.

Share All sharing options for: Plenty of blame to go around on FC Dallas winner

Contrary to popular opinion, the Seattle Sounders were actually playing reasonably well on Wednesday. Well, they played pretty well from about the 15th minute until about the 75th. Before that, it was pretty ugly -- and they predictably gave up a bit of a fluky goal. After that, it wasn't so much ugly as just really disjointed -- and two defensive breakdowns in particular sealed their fate.

The third goal was simply a matter of Djimi Traore losing his mark on a set piece and Stefan Frei failing to hold onto a shot that was in his arms. Those are regrettable mistakes, but all you can do is hope they don't happen again. Similarly, the first goal was a matter of a weird bounce falling perfectly. All you can do is hope that doesn't happen again.

But the second goal was a good-old-fashioned instance of players getting beat when they really shouldn't. It starts up at the edge of the offensive third when Andres Escobar and play a simple game of one-two. This shouldn't be a huge problem, being as the sideline is a pretty good defender in this situations. But Lamar Neagle lets Escobar get goal-side and everything from there are in is based on how the Sounders react. 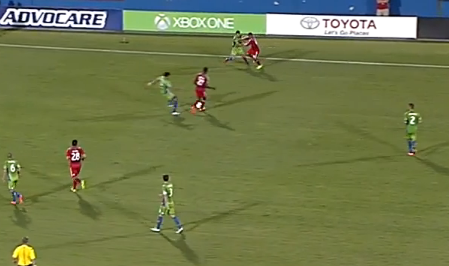 Neagle is now stuck chasing his man, but it doesn't have to a killer. The Sounders still have numbers and should be able to handle a guy racing into the box. 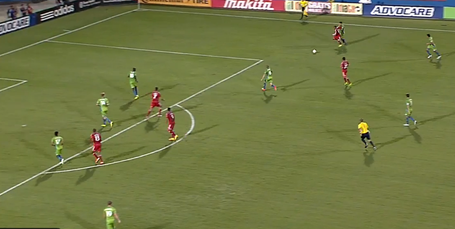 Even cutting out Neagle, there are four defenders marking four dangerous players. If Osvaldo Alonso can just cut off the ball, the Sounders should be in good shape. But he doesn't.

Traore now needs to make a decision. Does he help on the ball or does he stay with Blas Perez? He goes to the ball, meaning three defenders are now occupied by Escobar. Now the Sounders are in trouble.

Dallas now has the Sounders in full-blown scramble. Traore's best asset here is the end line. He needs to force Escobar there. Instead, he goes to ground in an attempt to tackle the ball away. 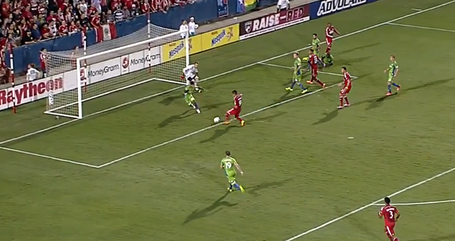 But his tackle fails and even though the cross deflects off of his back, it goes right to the fit of David Texeira, who DeAndre Yedlin never really picked up. It's an easy finish.

Here it is in its entirety:

While Sigi Schmid is right that individual mistakes were to blame, it's worth pointing out that several individuals made mistakes here. Neagle's was possibly the easiest to overcome, but also the one that shouldn't be happening. Alonso simply can't get beat like that in the penalty area. Traore needs to be smarter in when he decides to go to ground. And Yedlin needs to be minding the back post run instead of being so focused on the space right in front of the goal.