Zach Scott at 300: Epitome of Improbability

Frank MacDonald is a Seattle soccer historian, this story first appeared on his website and has been republished here with his permission.

Share All sharing options for: Zach Scott at 300: Epitome of Improbability

When seen racing back to cover, to be first to a loose ball, the lasting impression is of arms and legs furiously pumping, his chest bowed and practically a step in front-more than anything else. He's giving everything he's got. That epitomizes Zach Scott.

He appears to have broken through one brick wall and is prepared to lay waste to another. And another. Whatever it takes.

To know Scott's story is to know how unbridled determination and belief can undo all those laws of probability. It has taken belief in one's self and the providential belief of others in him to reach this point, this moment, when he becomes the first Sounder to reach 300 appearances.

First, a word about 300. It's not some random number; it defines a rarity. Only 23 players have surpassed 300 appearances in the first 19 seasons of MLS. Furthermore, of those 23 only Cobi Jones did so for one club. Going back 40 years, only Bob Lenarduzzi's 312 matches for Vancouver are greater.

Then there's the Zach Factor. Jones and Lenarduzzi were national teamers for the US and Canada, respectively. This guy, Scott, was a longshot to play the game at the college level, let alone the pros. He was a walk-on at Gonzaga, a trialist for the USL Sounders and further defied the odds in winning (and keeping) a place in MLS with Sounders FC. 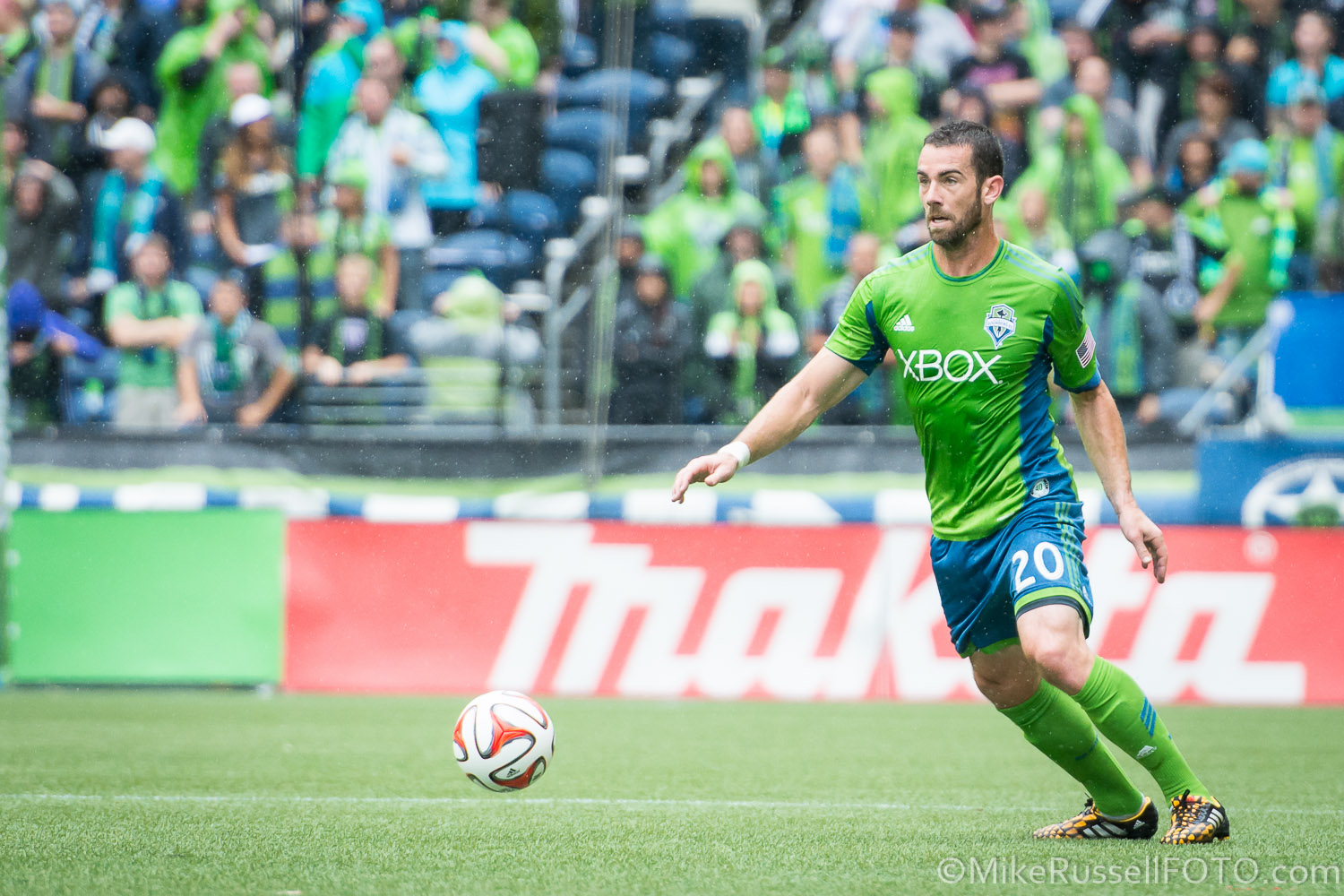 The fact that Scott comes from the land of shaka signs and surfer dudes only serves to ratchet the odds of his accomplishment into the stratosphere. Even his college coach, Einar Thorarinsson, had low expectations, if any at all. 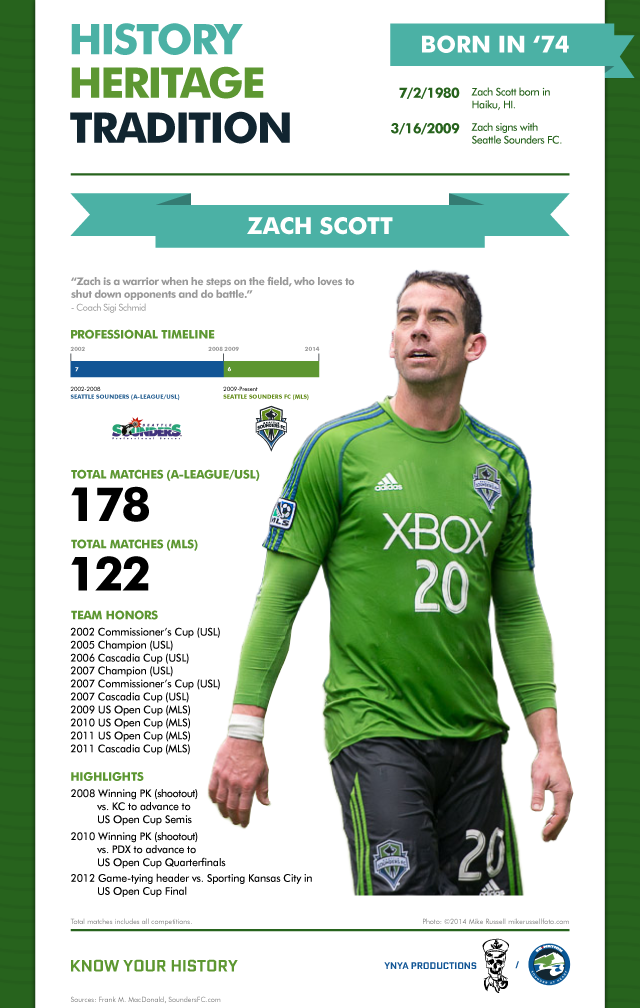 Click on the headline to get a bigger version.

Two years prior to his arrival, Gonzaga had discovered a diamond in the rough near Diamond Head. Brian Ching came to GU from the relative island soccer hotbed of Honolulu. Maui's soccer scene was far more modest. Ching would go on to stardom in MLS and the U.S. National Team. To be clear, Ching was recruited by Thorarinsson. In Scott's case, he recruited the Zags.

"The minute he came on campus, he changed all that (thinking)," remembers Thorarinsson. "He was so competitive, so hungry to learn and eager to play. He just soaked it up, like Ching had done. Every single day he was ready to play, very week you could see him getting better and better."

Scott soon won a starting spot for Gonzaga. He began with basics, a couple stock moves. He would learn something one day, use it then next and build from there. His coach preferred him playing in the summer. But Scott went back home to work as a construction laborer. Nevertheless, in August he returned to Spokane as the fittest of them all. There was no stopping him, says Thorarinsson.

Marking and tackling were his bread and butter. But his 2001 Senior Day performance went over the top. With the Bulldogs hosting nationally-ranked Loyola Marymount, Scott made Soccer America's national team of the week, hammering home three headers, all off free kicks, for the first hat trick by a GU defender in a 4-1 upset. 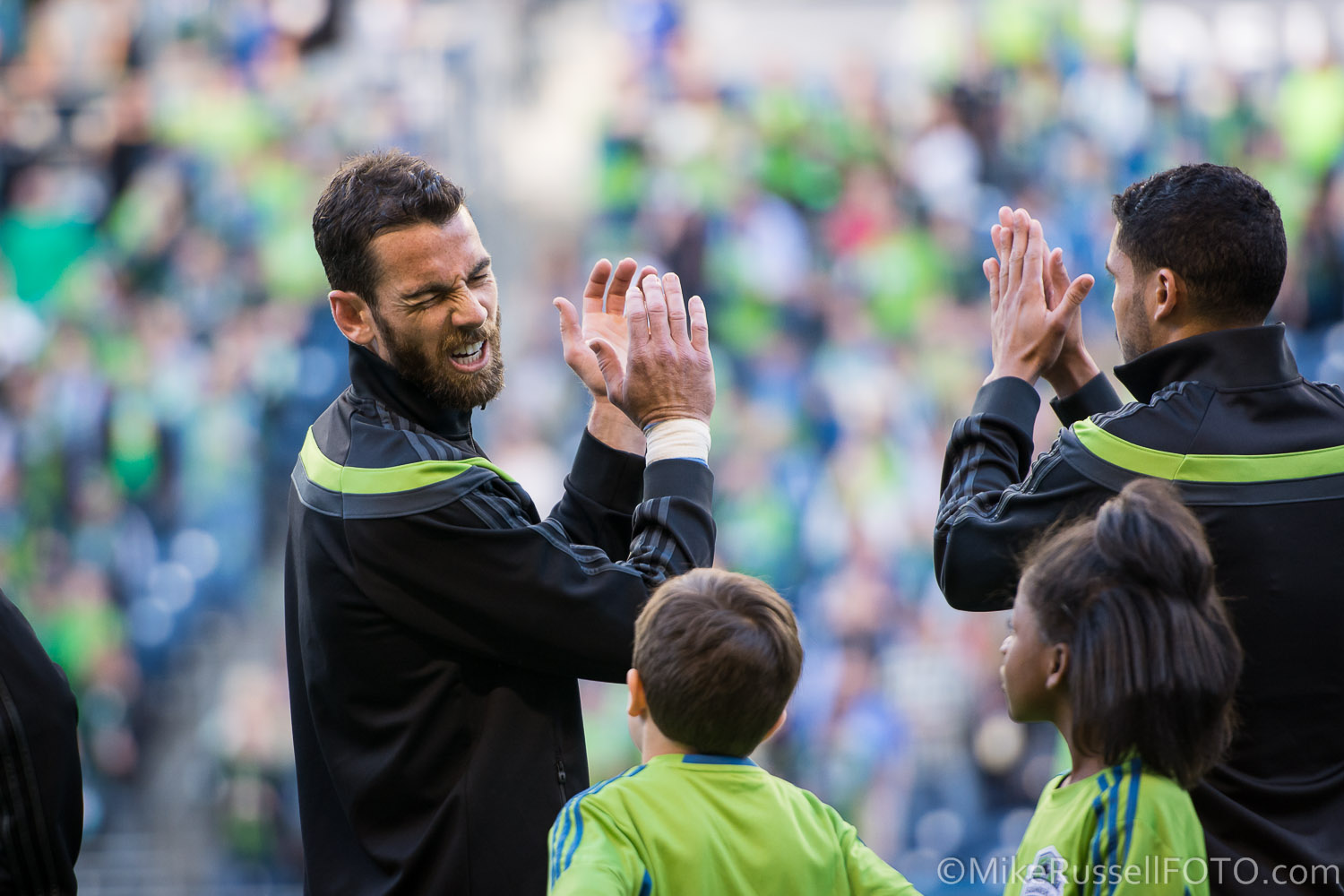 It was only then, toward the end of his collegiate career, that Scott pondered the possibilities of going pro. And the scouts weren't going to find him. He needed to move and begin knocking on doors.

It seems absurd now, but this story might have played out in Portland. Seattle, in those days, was far from Scott's favorite destination. More precisely, his problem was with Washington; he despised the Dawgs. Consequently he began his pro quest with a Timbers tryout. It did not last long.

"They told me I'm not exactly what they were looking for," recalls Scott.. Portland also offered unsolicited career advice. "They said I'm not the type of player that's going to go pro, that I should look at another profession."

Suddenly Seattle didn't look so bad. Far from dissuaded, Scott believed he could play at the next level. He just needed someone to believe in him. That someone, as it turned out, was newly-appointed Sounders coach Brian Schmetzer.

"He's somebody that right from the get-go that saw through my faults as a player and saw I was going to make it up in other areas," Scott says. "Schmetz has given me the benefit of the doubt a ton of times. Without him I wouldn't have improved from year to year nor would I have had this longevity."

By the end of his first month he won a place in the back four (along with two Huskies, Ryan Edwards and Scott Jenkins). It wasn't just any backline, either. That season the Sounders allowed just 27 goals in 28 matches while winning 23 and drawing four.

Always absorbing knowledge, Scott credits teammates such as Andrew Gregor and Leighton O'Brien for bringing him along. "Gregor was one of the smartest soccer guys, one of the guys who took me under his wing, who taught me how to be a good pro," he praises. "Leighton's in the same mold. They talked me through games where maybe I didn't play my best. They brought back my perspective, used it as an opportunity to teach, to help me get better." 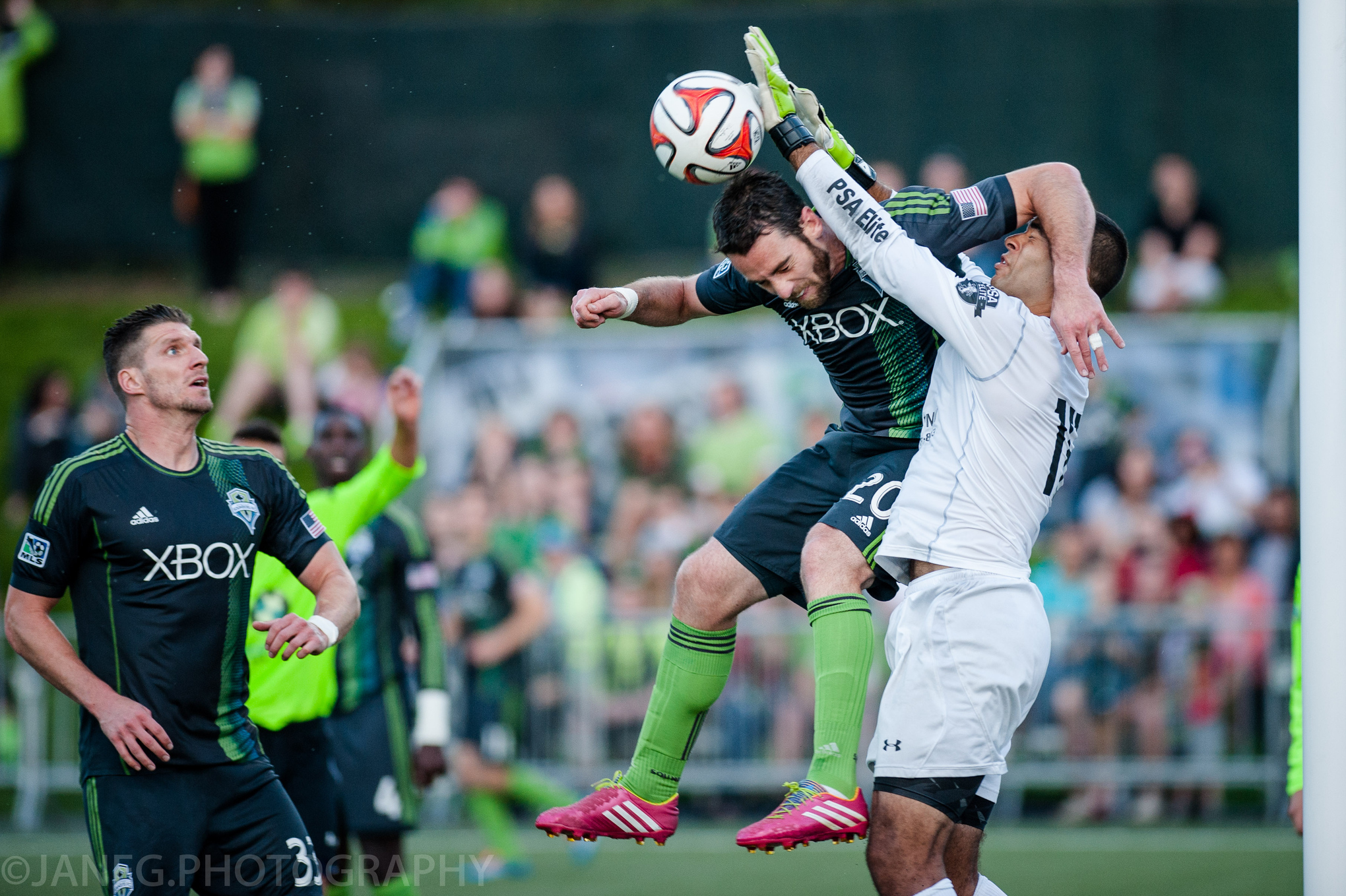 Getting a (Real) Job

As much as Scott raised his game, the odds were again stacked against him to migrate with the Sounders to MLS in 2009. Most of the USL starters were invited to tryout. While Schmetzer and Tom Dutra, now assistant coaches, could put in a word, it was up to Scott to convince Sigi Schmid of his value. "I'm one of those guys, that from a first impression, needs to grow on you," he admits.

Seattle had no less than six defenders with MLS experience in camp. Yet with each round of cuts, Scott survived. Finally, two days prior to the inaugural match, came a contract offer. And on opening night, against New York on national TV, there was Scott, starting at left back.

The days of playing on rutted mud and broken glass at Indiana, of searching for work each offseason, were now in the past.

"Getting to MLS was such a huge step forward," Scott says. "Getting a yearlong contract as opposed to seven months in USL, being able to get health insurance for my family because of my job. That wasn't always the case when you're trying to think what you'll do for 4-5 months, once the season's done.

"I never made a lot of money; that's never the reason I played soccer, to make money. (But) now to have it feel like soccer is my actual job, that's a good feeling."

It's one thing to get a job, another matter to keep it. Scott's role has only grown with time. When Schmid needed a no-nonsense stopper for a second-leg playoff encounter with RSL in 2011, Scott got the call. One of his proudest moments was walking off the field at Monterrey in 2011, part of a makeshift Sounders lineup that became only the second MLS team to win on Mexican soil. Now, at age 34, he is the first choice pairing with Chad Marshall at center back. 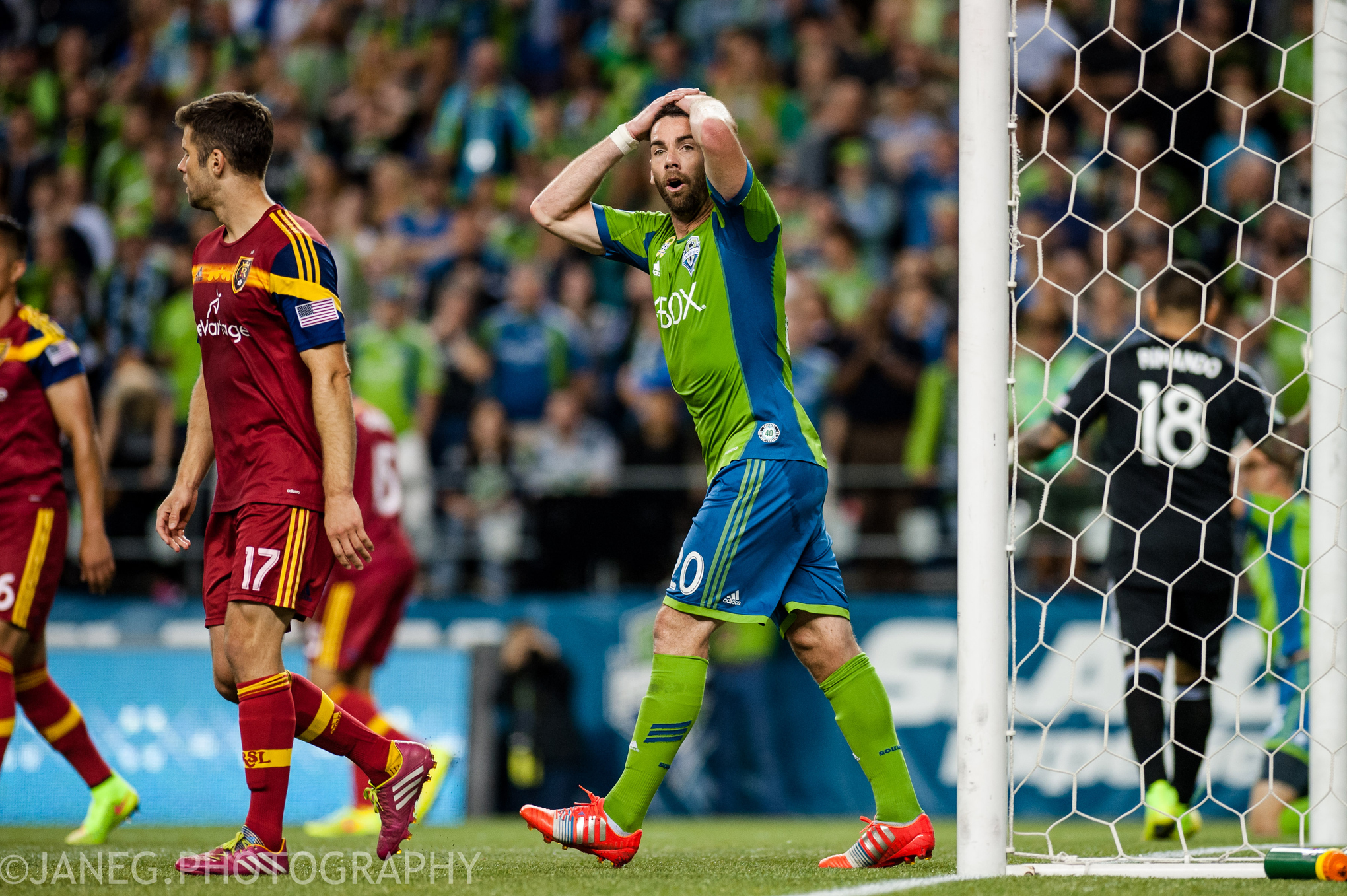 Back in Spokane, Thorarinsson often invokes his name as prime example of commitment and competitiveness. The only Zag to approach his zeal was Zach's younger brother, Daniel.

"Every year I talk to the guys about him, his self-motivation about his fitness, and his approach to every training and every game," Thorarinsson shares. "You don't have to motivate him at all. He's there to battle."

To see Scott going strong some 12 years after their office chat, is testament to a man going all-in, everyday, often working on his own after the others have hit the showers.

"He lays it all out in the game. A hard tackle may get him a red card now and then, but that's who he is," says Thorarinsson. "A typical blue-collar guy who just goes to work. That level of competitiveness often comes at a cost, like injuries, because he plays so hard. But he's been able to come back again and again. It's so impressive, getting to 300 games."

As for Scott, passing this milepost is merely a reminder of all those who helped him along the way, from his family to teammates to coaches. Maybe even the Timbers.

"I feel fortunate and blessed," Scott says. "I have opportunities because people have believed in me. Every step, there has always been someone along the road to make me a better player and person."

If Scott somehow defies all logic and manages to somehow approach 400 appearances, it's only because of the fire that burns brightly within. No matter the plaudits, he's never satisfied, never content with a personal performance. He can cite every single mistake, no matter how subtle.

He quotes the iconic Brazilian left back, Roberto Carlos, who said, "I live to be the perfect player, to play the perfect game."