Nothing happened in Seattle football yesterday.

But because it's funny, makes me think of The Turf Wars and doesn't fit anywhere else, here you go:

MLS Commissioner Don Garber and US Soccer President Sunil Gulati both had plenty to say at Thursday's Bloomberg Sports Business Summit, none of which is likely to shock you.

Garber at least paid lip service to addressing the transparency of league rules in response to a question about the fallout from the way Jermaine Jones was allotted overshadowing the signing of Jones itself.

Also, for those who had forgotten, promotion/relegation is not going to be a thing.

Landon Donovan has deservedly earned many accolades during his long career in MLS, and no one can dispute his scoring record or 14 consecutive appearances on the MLS All-Star team.  However, wouldn't it be best if he left the all-time assist record to Steve Alston to keep for now?  Hey, I'm sure the Sounders and all of us here would have no problem with that scenario.

The Montreal Impact have released their plans for a new $10 million training facility in Parc Champêtre in Montreal.  The four training fields and training center will be shared with the Quebecois team's academy, and team leadership hopes it will help attract high-level international players to the club.

In a fantastic little video piece from MLS Insider, I learned a lot about Bradley Wright-Phillips, the leadership style of Thierry Henry and what has drawn a few promising-but-struggling young English players across the pond to play in MLS.  You should watch.

Carlos Bocanegra has joined the 2014 retirement party.  As the generation of Donovan, Cherundolo, DeMerit, Howard(?), and now Bocanegra moves on, a new era in US Soccer is upon us.  One with a quite a bit more of a Rave Green tinge, even.  What's important now though is to honor the longtime defender and captain, and if you need a reminder of his exploits check out the BOCAGRAPHIC.

Even better, read the man's own words on his US career and what it has meant to him.

Remember earlier when I mentioned that Sunil Gulati said some words at a conference?  Here's the important ones. Basically the man says what we're all thinking: we want to host a World Cup, but not until the selection process is reformed FIFA stops awarding the tournament to the person in the room who is carrying the largest suitcase full of unmarked currency.

Why does England Manager Roy Hodgson's face look like this? 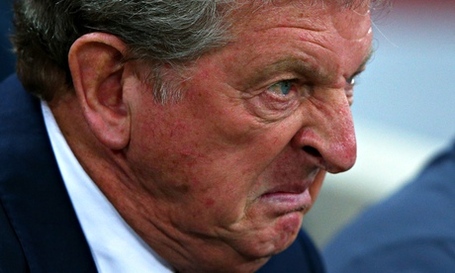 Well, he's a little upset at the characterizations of his squad after a pedestrian showing against Norway.  He may have used the words "fucking bollocks." I can understand the frustration when the TV ratings for your team's match were trumped by the Great British Bakeoff.

In other, less hilarious turf-related news, the Great Turf War to the north continues, as Canadian Soccer Association president Victor Montagliani weighed in strongly against critics who suggest gender discrimination is afoot when it comes to the standards for fields set for the 2015 Women's World Cup.