Sigi Schmid told gathered media after Sunday's practice that Clint Dempsey is getting a break of five or six days to help recover post-World Cup and before the MLS stretch run.

Share All sharing options for: Clint Dempsey is getting "5 or 6 days" rest - he needs it

At Sunday's practice there were two notable absences. Both Clint Demsepy and DeAndre Yedlin got additional time off. Most of Seattle Sounders FC had an extended break with no match over the weekend, but Sigi Schmid gave his United States World Cup players extra time off.

Schmid told the media today, "I've given him some additional days off here. Clint and I had spoken about it. We establish here's a place where we can give you five or six days. When you look around the league at a guy like Matt Besler saying 'man, I'm tired, I need a break' I think we're trying to incorporate that and keep our team going at the same time. We gave Clint a break right after the World Cup, I thought that was necessary, and I think we need to give him a little break here. I gave DeAndre an extra day as well right here also."

It's true. Besler, Dempsey, Bradley were key components to the World Cup performance of the USA and none have looked good an average since the World Cup. Sure, they've had good games since, but only one or two. Even the rotational guys based in MLS like Zusi, Beckerman, and Yedlin haven't been the amazing that earned their spots. If you look at WhoScored.com match ratings (Clint's, DeAndre's) for all the USMNT-MLS players that went to the World Cup only two players are doing better than their season averages post-World Cup. Neither Wondo nor Gonzalez played that much on the globe's biggest stage.

Even Nick Rimando isn't doing as well as he was prior to the World Cup, and he was just traveling. It shouldn't be a surprise that Matt Besler (who was injured during the Cup), Michael Bradley (who ran more than any other player at the World Cup) and Clint Dempsey (who had to play as a lone forward, his worst role) are struggling. 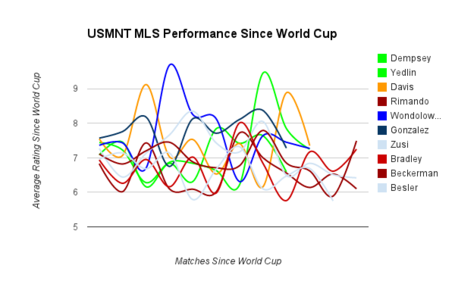 Same data, but as a graph

Yes, they've had a good match or two, but these are the best that MLS has to offer. They are tired and they are entering the stretch run for the league. Is it really a surprise that in a parity packed league that teams once looking unbeatable are now faltering (KC, Seattle, even TFC). Some of their best players are worn out, not just from MLS play, but from that World Cup run. It's probably true for players that represented other nations (insert blogger is lazy).

Real Salt Lake has a break in mid/late September, but it's not like they have a blow-out against Chivas USA book ending it. Their break is nestled in between a rivalry match with Colorado and a match against playoff hungry Vancouver. It's also only 8 days.

Going to the World Cup is a great thing for players. It's the highest of honors for an MLS player.

Going to the World Cup and not getting rest is hurting teams. Clint and DeAndre are getting their rest and that could help Seattle in this stretch run. Those other teams may just be hosed.