Your 2015 Reign Defender of the Year

Lauren Barnes was the leader of a Reign backline that had the second-best goals against average in the NWSL. For that, and many other reasons, she's your Reign Defender of the Year.

Share All sharing options for: Your 2015 Reign Defender of the Year

After the NWSL season ended in heartbreaking fashion, we asked you to help us celebrate the fantastic Seattle Reign FC season that came before the NWSL Final by honoring some of the best Reign players this year. Today, we're revealing your votes for the Defender of the Year Award. 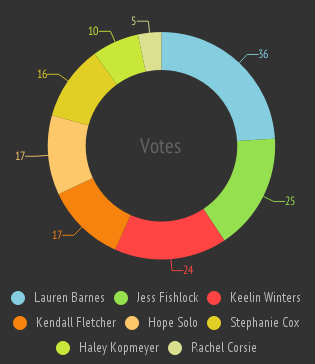 We received 150 responses, and this was the closest results of any category. With 24 percent of the votes, join us in celebrating your 2015 Reign Defender of the Year ... Lauren Barnes!

The midfield duo of Jess Fishlock and Keelin Winters came in at second and third, garnering 25 and 24 votes, while centerback-turned-right-back Kendall Fletcher and Hope Solo tied for fourth.

Lauren Barnes played every minute this season, organizing a solid defensive line that gave up just 21 goals, good for second in the NWSL.

Barnes, a left back before joining the Reign, possesses great technical skill and is comfortable with the ball at her feet. Her offensive prowess led to one goal and two assists this season. While she hasn't been relied on to score goals, she's actually quite good at it. At UCLA her senior year, Barnes was the second leading scorer.

On the defensive end, Barnes has great positional awareness, never getting caught too far wide or letting players slip into the box. In the last three seasons, Barnes transitioned extremely well into the CB role. The new partnership with Rachel Corsie was a seamless transition in large part due to Barnes' adaptability. A regular on the U-23 squad in 2010, I'd love to see her get a look on the senior national team. Barnes thrives when she has great players around her, and could provide the U.S. some great service from the back.

The Reign midfield was one of the main reasons the defense was so effective. Keelin and Jess were so good at controlling possession and winning the ball in the middle of the field, the backline didn't have to absorb much pressure. The two work so well together. If Fishlock pushes high, Winters falls in behind her. When one of them wins possession, the other is available for an outlet pass. It's a tandem they've been refining for three seasons, and like a fine wine, it only gets better with age.

Winters isn't the fastest player on the field, but any speed she lacks she makes up in positional awareness and technical skill. Fishlock, our Welsh Dragon, doesn't know the word "tired" or "injured." She'll only come off the field if she's missing a limb. How many times this season did we see a play similar to the one below, where Jess wins a tackle, pops up instantly, and moves the ball forward? I'm thrilled our readers recognize the importance of these two on the defensive end. You all are smart.

Kendall Fletcher made a surprise move to right back this year, a change she's been asking Harvey to make for about a year. Fletcher wanted to contribute to the offense in more meaningful ways, and she certainly did that this year, notching two goals and two assists. The 31-year-old played in the midfield at UNC, and played both in defense and midfield in Australia before joining the Reign in 2014.

Fletcher, who was one of the best centerbacks in the leagues last season, didn't have a perfect transition to that position. She struggled in her first few games to adjust to the speed on the flanks. But as the season progressed, Kendall became more comfortable and locked down the right side of a steady Reign defense.

I was a little surprised to see Hope Solo this high, but at the end of the day, I get it. She's the best goalkeeper in the world. No argument. Solo led the USWNT to a World Cup championship and won the Golden Glove award, making two game-changing saves against Australia to give the U.S. their first victory. For the Reign, she was a rock when she returned to the lineup. It's really hard to get a ball past Hope.

The Reign will be challenged to replace Stephanie Cox next year at left back, and I'm unsure how many more years Fletcher has left in her. But for now, the Reign have one of the best back lines in the NWSL. I'm good with that.