While Frei got off to a shaky start, he became one of the league's top keepers and was invaluable to the Sounders throughout the playoffs.

If the Seattle Sounders gave out a Most Improved award for the season, Stefan Frei would be at the top of the list.

After missing the 2012 season with a broken leg, and playing just one game in 2013, the Sounders took a big risk in signing the 28-year-old keeper. Yet, prior to his injuries, Frei was MVP at the 2009 MLS Player Combine and was Toronto FC’s starter for three seasons — setting the club record for appearances in 2011.

While Frei got off to a shaky start, his confidence grew each game, and he was one of the most valuable players throughout the playoffs. 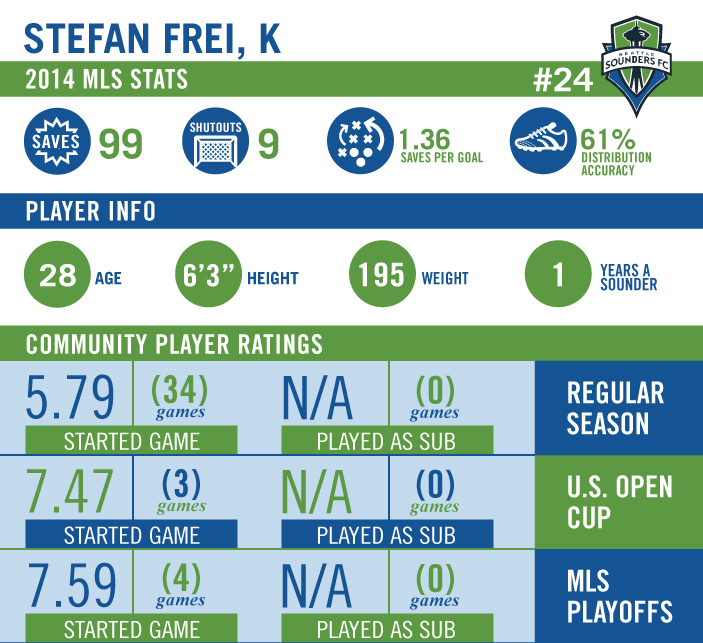 At the start of the season, Frei lacked confidence and a positional awareness to close down and stop shots close to his body. As the season progressed, and Frei gained confidence, we began to see more quick reaction saves Frei was known for in Toronto. As a result, he ended the season as one of the strongest shot stoppers in the league and was a key reason the Sounders advanced passed FC Dallas in the playoffs.

While he did save a (pretty poorly taken) PK against the Houston Dynamo in August, Frei has not proven to be a threat on penalties.

Frei's distribution also improved dramatically as the season progressed (especially when compared to a particular play against the Vancouver Whitecaps). He still relies on the long punt far too often, rather than looking for easy balls or quick throws. While the long ball can be effective at the right times, players like Lamar Neagle, Marco Pappa, Clint Dempsey, and Obafemi Martins are not the most reliable targets to win balls in the air.

In his first season with the Sounders, Frei was not a very vocal keeper, and he and Chad Marshall had a few communications issues early on. Frei was a co-captain in Toronto, however, and we could see him take on a more vocal leadership role in 2015.

Frei stays healthy and starts the majority of MLS matches, playing consistently well throughout the season and improving his goals against average (1.47 in 2014).