The New MLS - Stadiums and Attendance

Nowhere has the growth of the league been more evident than in the stands.

Share All sharing options for: The New MLS - Stadiums and Attendance

The new pervasiveness of MLS-specific stadiums is perhaps the most visible sign that Major League Soccer is growing up. It wasn’t that long ago that the majority of teams were playing in some mixture of AAAAA baseball parks and outsized NFL stadiums with uncaring landlords. In 2009 when the Sounders entered MLS, Kansas City was playing ball at CommunityAmerica Ballpark, the New York Red Bulls called Giants Stadium home, and the New England Revolution were stuck in a similarly cavernous pro football building. Houston and San Jose both shared their grounds with college football. And as much character as old RFK Stadium had, everyone who has ever been there addresses it with as much fondness as the bean burrito they ate last night. It’s shit now.

Now, most of those teams play in terrific new buildings which have improved the competitiveness and reputation of their franchises. DC United will be opening a crown jewel of soccer in a few years after finally passing a stadium bill over the offseason. The Chris Pratt of MLS stadiums* is Sporting Park, which changed the worst-supported team in the league to among the best with the last wave of the wizard’s wand. The lone remaining club with an untenable building situation is the New England Revolution, and the last few months have been party to rumblings of a stadium plan just outside of downtown.
*I’ve heard rumblings that Sporting Park will be the lead in the Indiana Jones reboot

This is important for a number of reasons, all of which relate back to money. When teams like the Red Bulls played in the old Giants Stadium, they didn’t have control of concessions and didn’t keep all the money from game day. The profile of the team within the building was only as big or as small as the NFL allowed it to be. More often than not, MLS teams playing in someone else’s building were treated as minor league, which, someone tell me if that qualifies as irony. This will be the case in the Bronx in March when New York City FC takes to the outfield in the new not-really Yankee Stadium. While being owned by the Yankees means the money will be going back into the organization at some level, that organization will likely have two other priorities for the expenditure of that cash.

Like New England, the Seattle Sounders play in what is widely considered an NFL stadium. While there will likely always be the issue of field turf while sharing space with American Football, the Sounders are not outclassed at CenturyLink Field. In fact, the building (one of the highest-rated in either sport in America) has greatly contributed to the team’s unparalleled success at the gates. The stadium allowed for the Sounders to start out with 18,000 season ticket holders from day one, a number higher than most MLS capacities at the time. Today, that number has doubled, and the team averages 43,000 fans per game. The urban location allows for utilization of traffic infrastructure not available in places like Carson, Bridgeview, or Harrison, as well as a gameday experience unique to the city of Seattle. And now, the recent renovation will allow Seattle to go for the all-time MLS attendance record.

The Sounders are just the most successful of the 13 expansion teams to join the league since 1996 (this number includes the now-defunct Miami Fusion and Chivas USA.) Many of these expansion teams have built in or near the downtown core. Of the 19 MLS teams (ranked by attendance) from the 2014 season, four of the top five called a downtown stadium home. Of the remaining teams, only Montreal could be considered downtown (they ranked 11th.)

Through sheer willpower and the use of MLS’ own attendance numbers, I’ve calculated each club’s all-time draw down to the 1/16th of a person. You read that right. The spreadsheet can be found here, but that graph isn’t very elegant. This is: 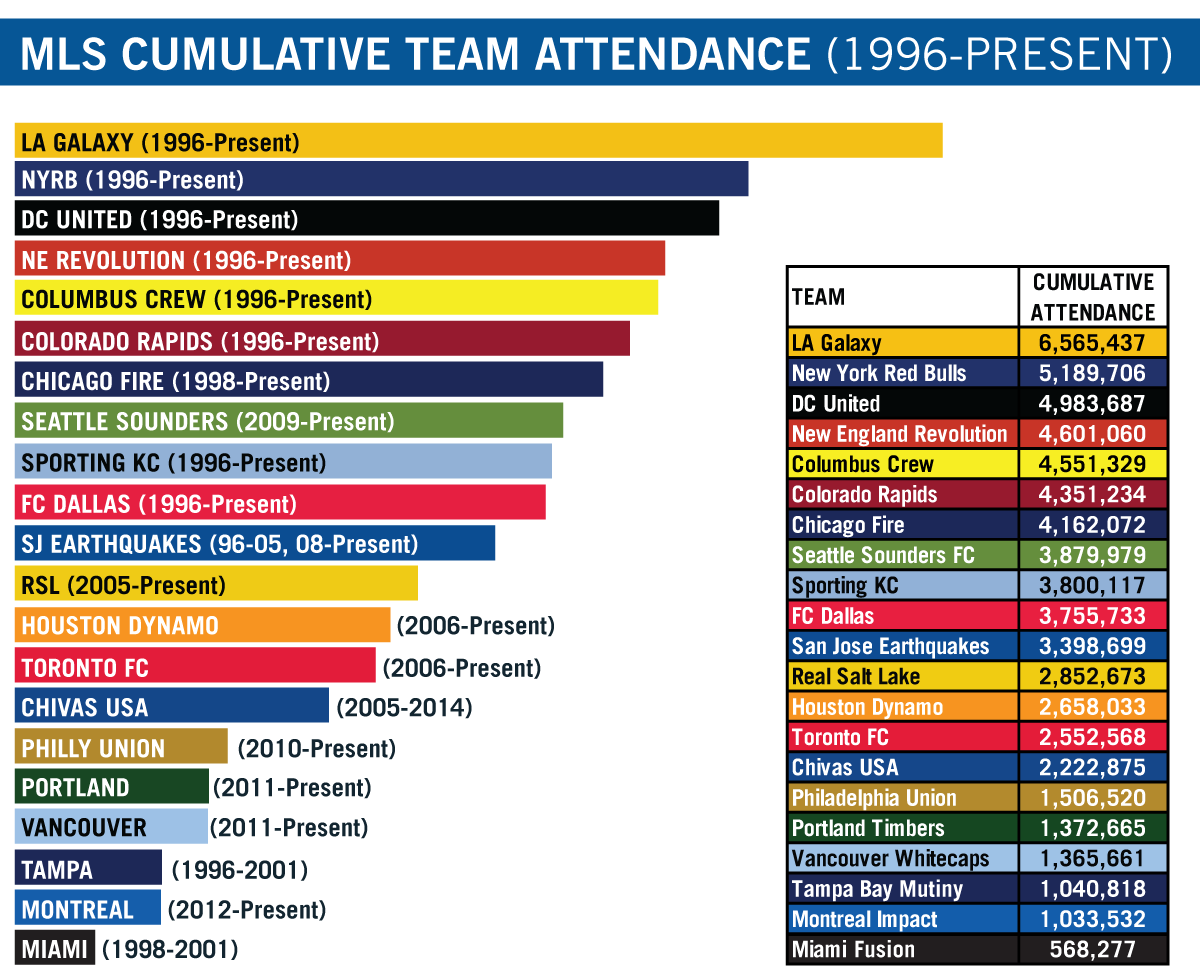 For Sounders fans, measuring yearly average attendance is no longer meaningful or worthwhile. In a similar piece last year, Seattle was on the heels of a few original '96ers in total draw. Now there's just one more expansion team left. A top-five slot will have to wait until the 2016 season, but Seattle continues to be just as popular as the movie Singles implied.

The fact that attendance is still such an important gauge for MLS can at times undermine the progress the league has made in making a product that people want to watch. Fans of American Football don’t compare numbers like that even on the wretched hive of scum and villainy that is ESPN commenting. As it is now, the TV contract is still not the "Wii" printing press for Major League Soccer the way other major American sports leagues have it set up. Until then, there will be a certain reliance on gate draws. Don’t let that distract from the true feat of marketing and passion that is MLS in the Don Garber era.