Once upon a time Lamar Neagle was the definition of a replacement level player. Sounders fans, particularly this one, loved him because he was local. Then, like a squire out on a quest, he grew before us. He is now an offensive threat that every Seattle Sounders FC opponent respects. He is loved not just because he came from Federal Way. He is loved because he's great and he's local.

Neagle is a late-bloomer, but his bloom is full. Still a local that hosts charity video game tournaments with the common man. In MLS Neagle finished tied for 28th in goals scored and 13th in assists. Only the following players beat him in both stats - Donovan, Valeri, Keane, Henry, Martins, P. Morales, Dempsey. Those men had 10 and 10 or better. Lamar wasn't even an assured starter and finished one shy in each stat. It's also kind of neat that Seattle has two of the players on that list ahead of him. Hail Hydra. 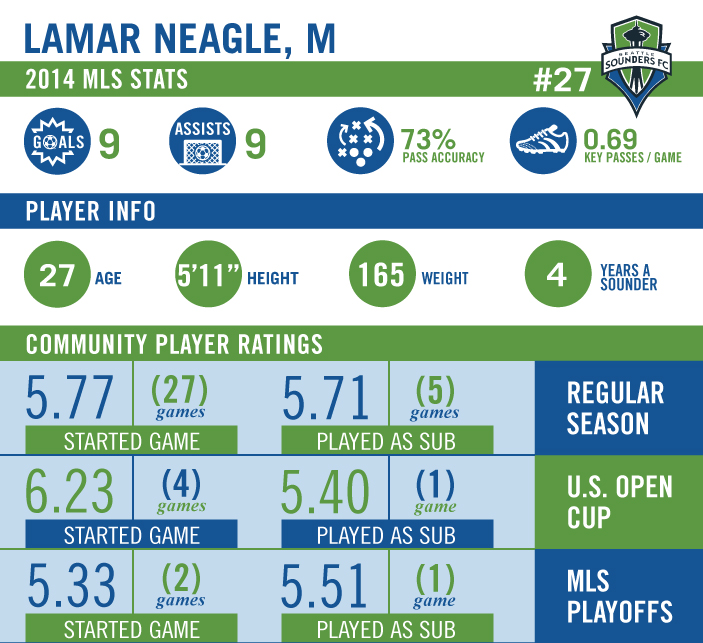 Neagle is a time and place goal scorer that uses effort and endurance to earn his space. He is opportunistic and streaky. Likely best as a forward, the either-side winger cuts in to do his damage. Not a great passer, and should not be crossing. He is aggressive in flooding the 18 with goal scorers.

Lamar is an effort defender. He gets back more than Seattle's other attackers. If his positions were mapped based on which side had the ball he would look like a forward on offense and a B2B mid on defense. He lays in a good tackle. Will not be beat by speed.

Neagle is not tall. He is not fast. He is not particularly strong. He will run you into the ground and never give up. His physique is as much about lung capacity as it is about attitude.

As someone who has spent three years underestimating Lamar Neagle it is time to stop. As a regular starter he will double-double in all competitions.